(Minghui.org) Today's news from China includes incidents of persecution that took place in 17 cities or counties in 9 provinces, where at least 54 practitioners were recently persecuted for their belief. 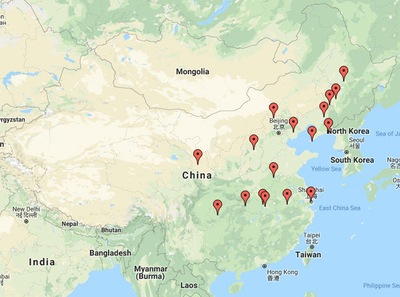 Mr. Zhang Jian and Ms. Zhang Ling were arrested on September 20, 2019. Their homes were ransacked.

At least another four practitioners were arrested, and taken to the local Drug Rehabilitation Center. At the same time, several practitioners could not be reached, and their whereabouts are unknown.

Four practitioners were arrested by the Liangyuan District police in late August 2019. One practitioner has since been released, but Mr. Xi Dongsong, Mr. Ba Wei and another college student are being held in the Shangqiu City Detention Center.

Ms. Yu Qingxian from the Chengguan District was arrested at home on September 23, 2019. She was taken to the Taoshuping Detention Center for 15 days.

Officers from the Xiaonan District Police Department, the Political and Legal Affairs Committee, Judicial Bureau, 610 Office, Domestic Security Division, and the Xinpu Town Police Station forced their way into Mr. Xu Zhangqing’s home and ransacked it on the evening of September 26, 2019. They confiscated over 300,000 yuan in cash, bank cards, passbooks, ID cards, cell phones, a notebook computer, and a printer.

Mr. Xu, his wife Ms. Tu Ailian, and their son Mr. Xu Gaorui (who is not a practitioner) were arrested. Ms. Tu and her son were taken to the Xiaonan Police Department, while Mr. Xu was taken to the Huangpi Road Detention Center.

The police have also placed their daughter-in-law Ms. Chen Chunyan and her one-year-old child under surveillance at home.

Mr. Wang Qiang and his wife from the Wanke Four Seasons Flower City in the Yuhong District were arrested at home by officers from the Huanggu District Police Department on the evening of September 23, 2019.

Peng Dixin, director of the Changqinghuayuan Police Station, and Wu Xuedan, a residential police officer of the No. 3 Section, went to Mr. Wang Xiaoping’s home and ransacked it on the morning of September 24, 2019. They took Mr. Wang to the police station. He was released after 11:00 p.m. that night.

Mr. Zhu Qidou, Ms. Zhou Yuhua, and another female practitioner from Tonghe County were detained for 15 days. They were released on September 27, 2019.

Ms. Chen Shoumei (in her 60s), Ms. Zhang Xiuying (56), and Ms. Zhang Guiyun (67), were placed under criminal detention by the Tonghe County Domestic Security Division, and held in the No. 2 Detention Center.

Ms. Sun Xiaohua was arrested at work by officers from the Yi’an District Domestic Security Division on August 1, 2019. Her home was ransacked. She was held for 37 days, before being released on bail.

Ms. Huang Sizhen had just found a job in early September when she was arrested at work in the Wanda Square by officers from the Tongling Domestic Security Division on September 8. They placed her arrest warrant over the police network. She was taken to a detention center.

Ms. Yang Manye was arrested by officers from the Wanli Police Station in the Putuo District on September 26, 2019.

Ms. Song Yuanhui was arrested by officers from the Kunming Street Police Station on the morning of September 12, 2019, for talking to people about Falun Gong. The officers later took her to her home, ransacked it, and confiscated her Falun Gong books. She is being held in the Yaojia Detention Center.

Ms. Ma Hui was arrested on the afternoon of September 19. Her home was ransacked. She was taken to the Yaojia Detention Center the following day.

Mr. Wang Laoqi, from the Xinzhou Residential Community in the Jiutai District, was arrested at home by three officers from the Jiutai Police Department on September 27, 2019. Photos of the founder of Falun Gong were confiscated.

Ms. Hou Xiufen and Ms. Zhao Shuzhen from Qianyang Town were arrested on September 19, 2019, for talking to people about Falun Gong at a farmers' market. Their homes were ransacked.

Both practitioners are being held in the Dandong City Detention Center.

Ms. Li Yanqin and Ms. Ma Fengqin were arrested by officers from the Zhaodianzi Police Station on September 24, 2019, for talking to people about Falun Gong at the Zhaodianzi Farmers' Market. Their hands were cuffed behind their backs, taken to the police station, and interrogated. The police forcibly took their blood samples, and made them sign their paperwork. Ms. Ma was released later that afternoon when they found out that she had high blood pressure. Ms. Li was taken to a detention center.

The officers called Ms. Ma the next day, and told her to take her blood pressure again. Her reading was still very high, so she was not arrested.

Ms. Tang Chunhua, from the Yuzhong District, and Ms. Zhang Qingbi, from the Jiangbei District, were arrested on June 29, 2018. They were tried by the Jiulongpo District Court on June 3, 2019, and were later sentenced to 15-month prison terms. Both practitioners were released from the Jiulongpo Detention Center on September 28.

Ms. Yang Mingsu from the Wutongjun area in the Yubei District, was sentenced to a four-year prison term. She was taken to the Zouma Women's Prison.

Officers from the Jiangbei Domestic Security Division ransacked Ms. Zhu Hong’s home on the morning of September 19, 2019, and videotaped the process. They took Ms. Zhu to the Dashiba Police Station, where she was forced to have her fingerprints, blood sample, and facial recognition taken.

Ms. Gao Qingxiu and Ms. Sun Runtao were arrested on August 17, 2019. They are taken to the Zhangjiakou City Detention Center.

Ms. Sun Shulan was arrested by several officers on September 25, when she brought her grandson home from school. Her home was ransacked. She was taken to the Guyuan County Police Department, before being transferred to the Zhangjiakou Detention Center the following day. She was released on bail after failing the physical exam.

“Finding the Heart of Cultivation I Once Had”