(Minghui.org) On October 4, 2019, the Dutch national newspaper Trouw published a report with the headline “Tribunal names China a criminal country.”

“The Chinese Communist Party (CCP) has seized power for seventy years. Let us review it together.”

The subsequent text described the CCP’s harvesting of organs from living Falun Gong practitioners and the final judgment of the independent China Tribunal in London earlier this year. 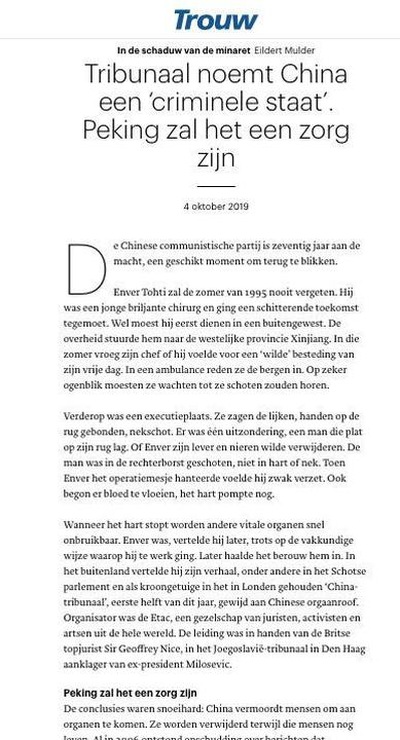 The article stated that the China Tribunal's investigations were based on solid evidence and firsthand testimony.

“In order to get live organs and kill people, CCP doctors select organs when the victims are still alive,” the author wrote.

“As early as 2006, there have been reports that the Falun Gong practice group is the main target. The CCP’s live organ harvesting crimes from Falun Gong practitioners was confirmed by the Tribunal. In addition, the China Tribunal also suspects that an ever-increasing body of evidence indicates that the killing for organs also occurs on Uighurs.”

The report continued, “The actual number of organ transplants is much higher than the figures given by the CCP itself. Volunteer donors in China are far from enough, but they have advanced organ transplant facilities and started without a voluntary donation system.

“Foreign patients can get organs on a prearranged and accurate date, which the China Tribunal considers to be very suspicious. Organs in other countries are available at an uncertain time.

“Countries such as Israel, Belgium, Spain, Italy and Taiwan prohibit their citizens from going to China for organ transplants. In Belgium, violations of this law can result in up to 20 years in prison. The China Tribunal repeatedly called China a criminal state at the UN human rights conference,” the article stated.

“Financial Criminal Learns Falun Gong in Detention Center, Sentenced to Life in Prison and Tortured for Her Faith”