According to insiders, each arrested Falun Gong practitioner counts as five non-practitioner suspects and will earn an officer 10 points.

Falun Gong, also known as Falun Dafa, is a mind-body spiritual discipline persecuted by the communist regime since 1999. Many police officers have actively participated in the persecution to gain extra financial rewards and/or advancement in their political careers.

If the targeted practitioners had medical conditions and could not be admitted by the local detention center, the police still took them there to finish the paperwork, as it wouldn’t count toward their points if the practitioners were released at the police station.

Most of the targeted practitioners had their homes ransacked and their Falun Gong books and other materials confiscated. Seven practitioners were released on the day of their arrest, 13 were released after several days of detention, 3 are still in detention, and the case status of 4 remain to be investigated. One practitioner's case has been submitted to the procuratorate as the police attempt to file charges against her. 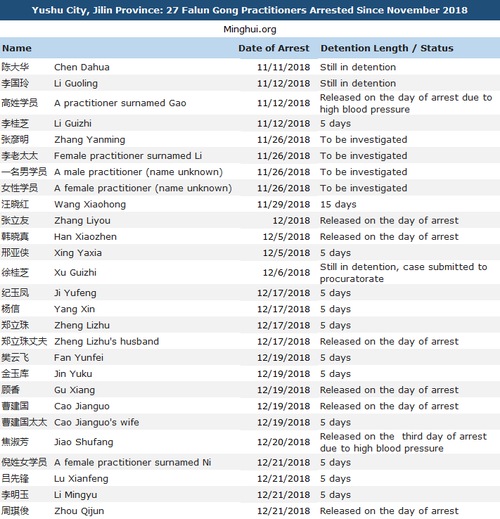 “Clarifying the Truth and Cultivating at Work Changes the Environment”