(Minghui.org) On January 9, Libero, a nationally circulated Italian newspaper, reported the findings of an independent tribunal regarding the state-sanctioned killing of prisoners of conscience for organs in China. The newspaper article also strongly condemned the human rights crisis.

The interim judgment by the Independent Tribunal Into Forced Organ Harvesting from Prisoners Of Conscience in China (the China Tribunal) was delivered in London on December 10, 2018. 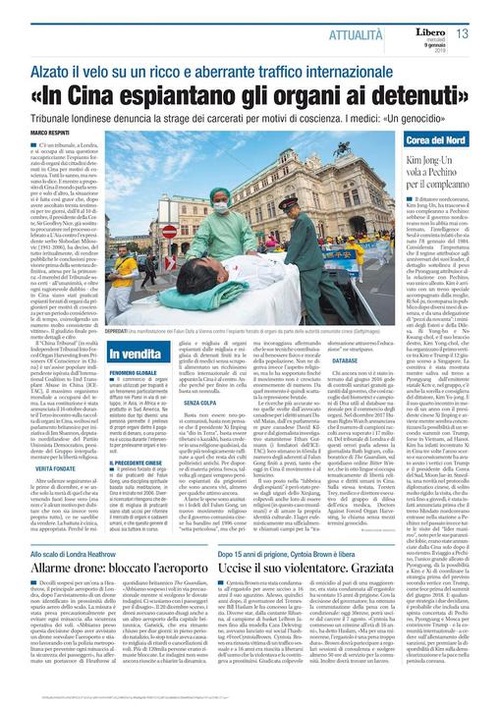 The article stated, “After listening to 30 witnesses for three days, from 8 to 10 December, the Chair of the tribunal, Sir Geoffrey Nice, QC, …... concluded: The Tribunal’s members are all certain – unanimously, and sure beyond reasonable doubt – that in China forced organ harvesting from prisoners of conscience has been practiced for a substantial period of time involving a very substantial number of victims."

The final judgment, which is due in spring 2019, promises details and figures. Though it carries no legal authority, it will serve as an evidence-based record that can place pressure on international organizations and raise public awareness.

Libero told its readers, “The Independent Tribunal is an independent public assembly inspired by the International Coalition to End Transplant Abuse in China (ETAC), the world's leading body to deal with the issue. Its constitution was announced in the British Parliament on the initiative of Jim Shannon, a Northern Irish member of the Democratic Unionist Party, president of the Interparliamentary Group for Religious Freedom.”

Chaired by Sir Geoffrey Nice, QC, who led the prosecution of Slobodan Milošević at the International Criminal Tribunal for the former Yugoslavia, the China Tribunal is an independent panel of seven with expertise in International Law, Human Rights, Medicine, International Relations, Chinese History, and Business.

The article stated, “Thousands and thousands of organs harvested by the unscrupulous doctors feed a very rich international traffic, of which China is at the center.”

“To get fresh raw materials, sometimes organs are even harvested from prisoners, who are still alive, at least for a few moments.”

The article further discussed links between the Chinese government’s collection of biometric data and DNA samples from prisoners and a national database used for organ matching. It added, “In December 2017, Human Rights Watch announced that the number of samples collected had exceeded 17 million.”

The article reported that Falun Gong practitioners, who have been persecuted by the Chinese regime since 1999, are the main victims of forced organ harvesting.

“College Professor Loses Consciousness in Prison Due to Mistreatment”