Western Couple: “We are the Voice of Chinese Falun Gong Practitioners”

(Minghui.org) A Western couple said the following from the bottom of their hearts while clarifying the facts to passersby: “It's hard to stand under the hot sun for a long time, but we will continue to tell people the facts of the persecution until it ends and mainland Chinese Falun Gong practitioners can freely practice their belief. Standing here to face so many Chinese tourists, we are the voice of Chinese Falun Gong practitioners.” 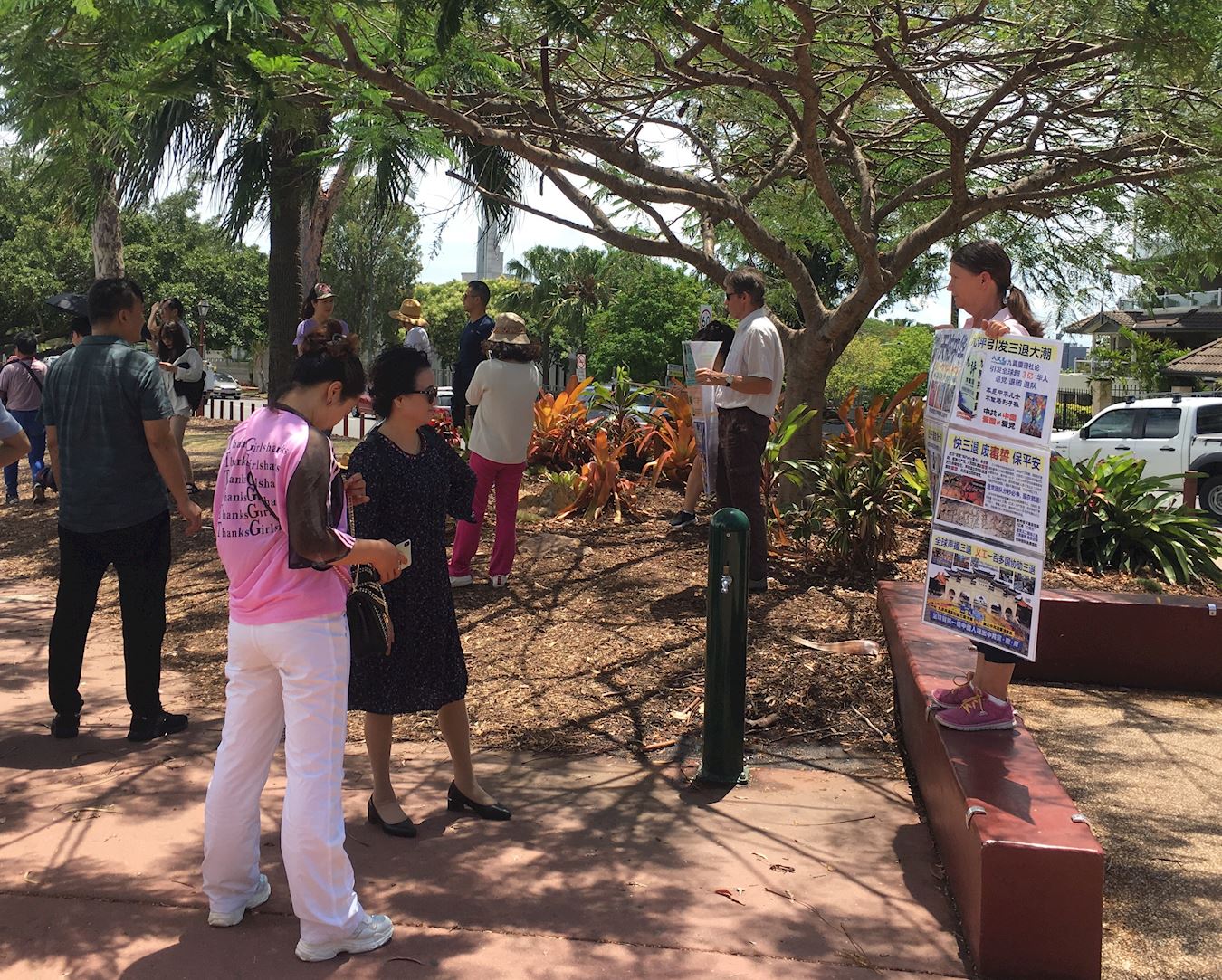 John and Amanda both teach at a private high school, and both started practicing Falun Gong, also called Falun Dafa, in June 1999. The teachings in Zhuan Falun, the main book of Falun Dafa, guided them to follow the principles of Truthfulness-Compassion-Forbearance. As a result they improved their relationships with family and friends.

Through practicing the exercises, their health improved and they found peace in their lives.

However, only one month after they started practicing Falun Gong, the Chinese Communist Party (CCP) started the persecution of the practice. They were stunned, thinking, “How could this be possible? How can a person be persecuted for wanting to be good?”

They gradually learned that the communist regime controlled all the media in China and brainwashed the people of China with propaganda to instigate hatred and fear toward Falun Gong. This resulted in many Chinese people not knowing the truth about Falun Gong, and unintentionally participating in the persecution.

They have since joined Falun Gong practitioners around the world in helping Chinese people to learn the truth.

Kangaroo Point is a must-see destination for many tourists visiting Queensland. Every noon, after tour buses park, Chinese tourists see this Western couple smiling and greeting them with banners written in Chinese.

This is sometimes the Chinese tourists’ first encounter with a Falun Gong practitioner, and their first opportunity to learn the truth about Falun Gong, countering the lies spread by the regime.

Many Chinese people read the display boards closely, and some take photos of the boards to show people at home.

During the week, John leaves his work at 11:00 a.m. and drives to Kangaroo Point. He alternates between demonstrating the Falun Gong exercises and holding display boards. Many Chinese are surprised to see a Westerner practicing Falun Gong, and exclaim, “Look, even Westerners practice Falun Gong!”

John couldn't help but think of Tiananmen Square in Beijing when he raised the banner printed with the characters “Falun Dafa Hao” (Falun Dafa is good). He said, “Numerous Chinese practitioners unfurled a banner like this (on Tiananmen Square). I feel like I am one of them.”

Many tourists gave John a thumbs up and nodded at him with a smile. Some openly thanked him.

John added, “I am happy to see more Chinese people learn the truth.

A Chinese tour guide once told Amanda that he could hardly believe his eyes when he saw Westerners introducing Falun Gong to Chinese tourists. He also said it's very important for Western practitioners to talk to Chinese people because they have a greater impact on them.

The tour guide was also curious and asked Amanda many questions about Falun Gong and its benefits.

Young Chinese Man: It Surprises Me That This Book Is So Popular Overseas

A young Chinese man once asked Amanda how she could read Zhuan Falun in Chinese. He obviously believed the book was never translated and only exists in Chinese.

She told him that the book had been translated into many languages and circulated to many countries around the world.

The young man said it surprised him that the book was so popular overseas.

Our Only Purpose Is to Help Chinese People Learn the Truth

John recently retired and can now spend more time at the tourist destination.

“We do this to support Falun Gong practitioners in mainland China who are still being persecuted. We also want to help Chinese people who have been deceived by the regime's propaganda to make a correct choice for their own life.

“Falun Dafa Cultivation Has Elevated My Mind and Body”

“Practitioners Arrested and Harassed in Tianjin”