(Minghui.org) Ryan was born in Vietnam. His family moved to Queensland, Australia when he was a child. He and his family are deeply grateful to have found Falun Dafa, and Ryan wishes to share his experiences. 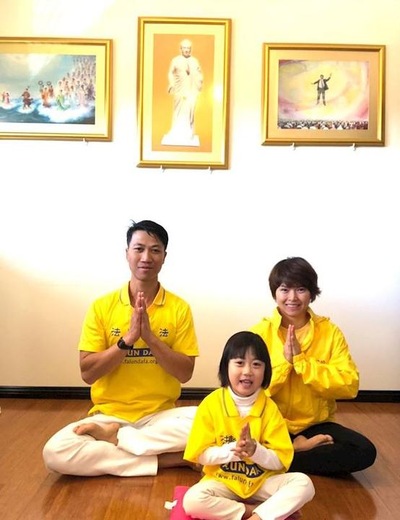 Ryan and his family are grateful to Master Li Hongzhi (Falun Dafa's founder).

Ryan recalled, “My wife Kelly used to be a Buddhist. As time passed, we felt that Buddhism was no longer the pure land we were looking for, so we decided to search for a belief that truly guides people to be compassionate.”

While searching the Internet one day, Kelly found the words “Falun Dafa.” She browsed the Minghui website and was happily surprised that she could download the main book of the teachings, Zhuan Falun. She read it carefully and felt it was exactly what she and Ryan had been looking for.

As soon as Ryan came home from work that day, Kelly excitedly told him, “I have found Falun Dafa!”

Kelly began reading Zhuan Falun to Ryan while he drove her to work and back. Ryan listened carefully and thought, “What's written in this book is great! The author is very knowledgeable and answers so many questions!” He was filled with admiration for the author. He later realized that the author is the Master he had been searching for.

Ryan and Kelly were thrilled to begin practicing Falun Dafa. They hadn't yet met any other practitioners, but they began reading Zhuan Falun with their children every day. They also started following Falun Dafa's principles of Truthfulness-Compassion-Forbearance in their daily lives. The whole family now enjoys a happy and peaceful atmosphere.

Dealing with Tribulations as a Practitioner

Ryan talked about overcoming tribulations and said, “Shortly after I began practicing, my arms were covered with a rash. The rash was so painful and itchy that I couldn't scratch or touch it. It was unbearable. I briefly thought about going to see a doctor, but then I remembered, 'The rash must be a reflection of my karma built-up from my past wrong-doings. I have been cultivating myself according to Dafa, and Master is helping me dissolve the karma. It's great!'”

“The first night was very painful, and I couldn't sleep. In my mind, I kept saying, 'Falun Dafa is great! Truthfulness-Compassion-Forbearance is great!' I knew that I could break through this pass with my strong faith in Master and Dafa.”

“I felt much better the next morning. I asked my wife for a long-sleeved shirt to cover my arms, so that my colleagues wouldn't be concerned about me. A few days later I suddenly realized that my arms were fine. I didn't even know when the rash disappeared,” Ryan said with a smile.

As Ryan continued to cultivate himself, he experienced what Master described in Zhuan Falun:

“What will happen is that when you go sit there you’ll feel wonderful, like you’re sitting in an eggshell, and you’ll feel really good, you’ll know that you are cultivating, but you’ll feel like your whole body can’t move.” (The Eighth Talk from Zhuan Falun) (Translation Edition (Feb. 2003, North America))

Ryan said, “Sometimes, as soon as I begin meditating I feel that my legs are gone, and after a while my body disappears too. I only have the thought that I'm meditating. It's a wonderful feeling!”

Nearly every time he meditates Ryan says that he sees things in other dimensions. He saw a huge Buddha and the Monkey King. One time, he saw that each of Buddha's fingers was emitting light while he held his hands in the lotus hand position. These light rays became golden light columns that reached to the sky.

Using Every Opportunity to Cultivate and Improve

Ryan is an inspector for his company. One time he gave his team their assignments but no one responded. Because he's a very responsible person, Ryan couldn't help getting upset and arguing with them.

He said that during his lunch break that day he reflected on his behavior, “I thought, 'I'm a cultivator. How can I argue with others because I'm unhappy? I must apologize!'” Since everyone was at lunch with him, he was able to immediately apologize for the way he treated them. Everything was fine afterwards.

“One week later, we began working on another project. On my way to the inspection site, I thought everyone must already be there, hard at work, since we had a tight schedule. But when I arrived no one was there. I panicked and became worried. I did my best to calm down and started calling them, one by one. Everyone told me that they were busy with something else. I adjusted my mindset and calmly told them that I would get started.”

Ryan said he realized that whenever things did not go smoothly, it was an opportunity to look within himself. He gave up his assumptions about the project, and followed his team members' suggestions to make changes to his arrangement. As a result, they were able to finish the project ahead of schedule.

Ryan learned from Falun Dafa that cultivators should put others' needs first. He said, “When I run into conflicts at work, I first look within myself to see if I've caused the problem, instead of demanding that others follow my ideas. I work together with my team to make a plan so that everyone is happy and works hard. It gives me an opportunity to improve my xinxing and cultivate myself.

“I found that when I let my ego go and place others' needs first, many conflicts are easily resolved.”

“Some people blow up even when they’re disciplining their kids, they’ll yell and make a big scene. You don’t have to be like that when you’re disciplining your kids. You shouldn’t really get angry. You should teach your kids with reason and good sense, and that’s the only way you can really teach them well.” (The Ninth Talk from Zhuan Falun) (Translation Edition (Feb. 2003, North America))

Ryan said, “My daughter is at the age where most children are naughty, and I used to lose my temper at times. I've realized that I'm a cultivator and should teach kids with reason and kindness instead of getting angry.

“One time, my daughter began making a mess. I became angry, but remembering Master's teaching, I noticed that when I became angry I wasn't being rational. I reminded myself not to lose my temper this time, and that it was natural for young kids to play like this. If I want to see my daughter grow into a good adult who follows Truthfulness-Compassion-Forbearance, I have to be truthful, compassionate, and tolerant of her.

“I immediately apologized to my daughter for getting angry. When I tuck her into bed each night, I tell her, 'If you want to be a good person, you must follow Truthfulness-Compassion-Forbearance.' Her behavior is becoming better and better.”

The Importance of Saving Chinese People

Ryan goes to Chinatown in Brisbane on weekends and holidays. He usually stands where tourists from China get off their buses, and holds a display board with information about Falun Dafa in Chinese. 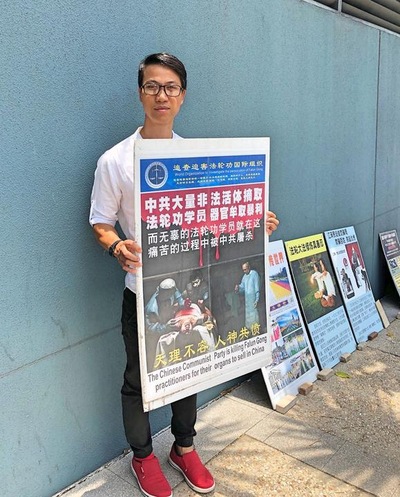 Ryan understands the importance of exposing the persecution of Falun Dafa to Chinese tourists.

Ryan said, “When I first began practicing, I didn't know much about truth clarification. I simply did what the other practitioners did. After I learned the horrific details of the persecution of Falun Dafa practitioners by the Chinese Communist Party, I began treating truth-clarification as seriously as I do my job. I hope more people will learn the facts about Falun Dafa and how it's being persecuted. My wife also takes our kids to tourist sites to clarify the facts. She's learned how to say, 'I wish you a great trip' in Chinese.” 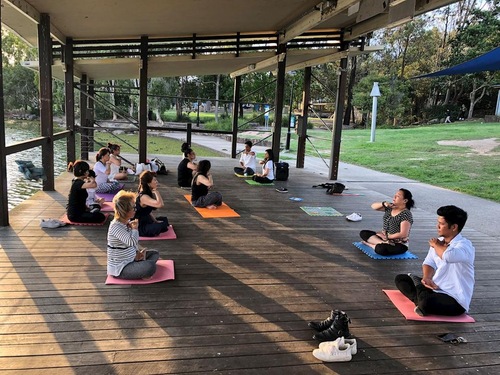 Vietnamese Australian practitioners in Brisbane do the Falun Dafa exercises.

Ryan and the other Vietnamese Australian practitioners in Brisbane are very grateful that Master has introduced Falun Dafa to the world. They are determined to cultivate themselves diligently and do the three things well!

“Germany: As a Coordinator, I Treat Challenges with Compassion”