Judge Among Victims of Mass Arrest in Heilongjiang Province, Wife Sprained Arm Due to Police Brutality

(Minghui.org) A judge was among the 119 Falun Gong practitioners in Heilongjiang Province arrested for their faith on November 9, 2018.

Falun Gong, also known as Falun Dafa, is a mind-body improvement system persecuted by the communist regime since 1999.

A group of police officers, who had been waiting outside of Mr. Gao Guoqing's home, broke in as soon as he opened the door on November 9. They held him down on the sofa and attempted to handcuff him.

His wife tried to stop the police, but was pushed down to the ground. She sprained her arm and suffered a bone fracture in her elbow. She had to have surgery and is being taken care of by her son and daughter while she recovers. 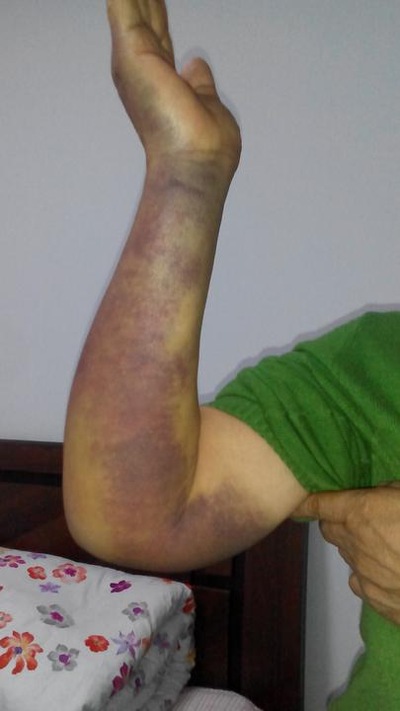 Mr. Gao's wife sprained her arm when the police pushed her.

His arrest was approved by Daoli District Procuratorate on December 19, 2018.

It was reported that Mr. Gao was diagnosed with high blood pressure and a heart problem, but it wasn't clear whether he received proper medical attention.

After the Chinese communist regime ordered the nationwide persecution of Falun Gong in July 1999, he stopped practicing out of fear.

Shortly afterward, his medical conditions recurred. He tried many medications, but none were effective.

He began to practice Falun Gong again in 2008 and saw a quick improvement in his health. For refusing to renounce his faith this time, he was arrested and now faces unlawful sentencing.