(Minghui.org) Today's news from China includes incidents of persecution that took place in 9 cities or counties in 7 provinces. According to this report, 7 Falun Gong practitioners were subjected to mistreatment during their detention, and at least 8 were illegally arrested. 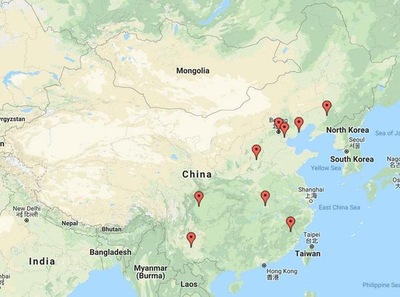 Mr. Wang Juliang from Tongzhou District was arrested by officers from the Jiaowangzhuang Police Station on January 2, 2019. His whereabouts are unknown.

Ms. Zhang Yongqiong went to visit her relatives in Dali City, where she was arrested for posting Falun Gong materials on December 29, 2018. Her home was ransacked, and her Falun Dafa books were confiscated. She is being held in the Xiangyang Detention Center in Xiaguan City.

Among those arrested in the Donghu Xiyuan Residential Community on December 26, 2018, Ms. Mei Jing from Xianning City was reported to have been held in isolation [separately from others]. Her whereabouts are unknown.

Ms. Du Fengjuan, from Shahe Village, Badaohe Town, Qinglong County, was arrested by officers from the Badaohe Town Police Station and the Stability Maintenance Office on December 27, 2018. The officers confiscated all her Falun Dafa books. Ms. Du was taken to a detention center for five days of detention. She has returned home.

Ms. Guo Wenjuan from Baodi District was arrested and taken to the Baodi District Detention Center on December 4, 2018. She is facing official arrest.

Ms. Yu Hailan, 64, from Wanghua District was arrested on April 24, 2018. She was given a one-year-and-six-month prison term.

Ms. Yu Haiping, 69, from Wanghua District was arrested on April 24, 2018. She was given a two-year-and-six-month prison term.

Ms. Zhang Changrong and Ms. Xiang from Pengzhou City were arrested by officers from the Chengguan Police Station and the community property management personnel on January 3, 2019. The officers confiscated Falun Dafa books, printed materials, and DVDs. Both practitioners have returned home.

Mr. Ye Guohua was arrested on January 16, 2018. He was held in the Jian'ou Detention Center. He passed away on September 11 due to abuse by Wen Yushan, head of the Jian'ou City Domestic Security Division, and other officers. Fearing that the facts surrounding Mr. Ye's death would be exposed, the officers placed four more practitioners under detention. Ms. Cao Rongxiu, 64, and Ms. Zhang Shuiying, 57, were detained for 15 days. Mr. Cao Xirong, 57, and Mr. Wu Guiying were detained for five days.

Mr. Liu Xingmin was arrested when taking a bus in Taiyuan City on December 17, 2018. He is being held in the Linfen Detention Center.

“How I Was Reminded that We Must Completely Deny Any Interference”