Drugged in Prison and Traumatized, Guizhou Woman Dies After 11 Years of Suffering

(Minghui.org) After suffering 11 years of mental disorder caused by force-feedings of nerve-damaging drugs in prison, Ms. Yang Dezhen passed away recently in an assisted living center. She was 63. 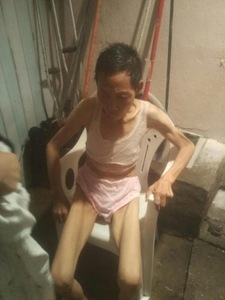 Ms. Yang became very scared of having meals two years after she was released from prison in 2005.

Ms. Yang, a Falun Gong practitioner from Guizhou Province, was imprisoned at Guizhou Women's Prison (also known as Yang'ai Prison) between 2001 and 2005. She was sentenced for distributing informational materials to raise awareness about the persecution against Falun Gong.

She began to suffer from memory impairments two years after she was released. She became scared when people knocked on her door. She repeatedly said: “They don't stop beating me and put drugs into my meals.” With her being very scared to have meals, her family had to be careful in asking her to eat and tried to create a relaxing environment at home in order to help her take in some food.

Drugged at the Prison

During her 4 years of imprisonment, the guards forced Ms. Yang to work for more than 10 hours each day without pay. Meanwhile, she was also forced to watch slanderous videos attacking Falun Gong for hours.

Despite the prison's efforts to brainwash her and force her to renounce Falun Gong, she remained firm in her belief.

The guards instructed the inmates to mix some yellow pills into her meals. When she found out about the drugs, she refused to eat. The inmates beat her and forced her to finish it.

Before she was released from prison, the inmates added the yellow drugs to her meal again and forced her to eat it. This experience was traumatic to both her mind and physical body.

Mental Disorder Worsened Over the Years

As Ms. Yang's mental disorder progressed in recent years, she lost her way easily and didn't know how to get back home when she went out. Gradually, she lost the ability to take care of herself and her children had to send her to an assisted living center.

Since 2017, Ms. Yang became bedridden and incontinent. She stopped asking for food, as if she was never hungry. But when someone gave her food, she wouldn't stop eating, as if she would never become full.

In September 2017, the police harassed her at the assisted living center during the “Knocking on the door” campaign. The center's staff members reprimanded the police and asked them to leave.

Prior to her prison sentence in 2001, Ms. Yang had been arrested and detained for appealing for Falun Gong in Beijing in 2000. The police revoked her household registry, forcing her to wander about.

“Power of Dafa: Recovery from Disability”