(Minghui.org) Several Falun Gong informational events were held in several cities in Central and Eastern Slovakia August 24-31, 2018. People participated in the petition drive to urge Slovak state officials to address the human rights issues in their talks with Chinese officials and to stop the persecution of Falun Gong.

Practitioners visited Banská Bystrica, a city in Central Slovakia, on August 24. They set up a petition table at SNP Square, and several of them demonstrated the Falun Gong exercises. Their posters and informational materials on display made it possible for passersby to learn about the ongoing persecution of Falun Gong in China.

People asked how they could help. One passerby who had come to learn more after hearing the facts said, “Sure I'll sign. I wish you all the best.” 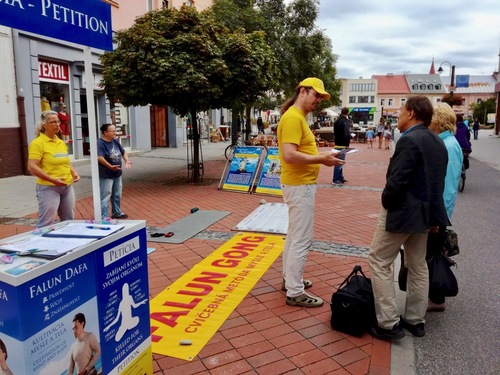 In Liptovsky Mikulas, one woman who heard the facts about the forced organ harvesting from living practitioners was very moved. She signed the petition, saying, “There are a lot of terrible things going on in the world and it is necessary to do something about it. It is good that you care about it and continue with it!”

At the next stop in Poprad in Eastern Slovakia, many people were moved by the fact that Falun Gong practitioners reminded them of the values of Truthfulness-Compassion-Forbearance and seemed encouraged to be sincerely good.

In Spišská Nová Ves, even though it was a national holiday, there were many people out and about. Also, the children showed interest in the exercises. Two little girls tried the meditation, while other children learned to fold origami lotus flowers, and many older people signed the petition. Many said they would pray for practitioners who are suffering as a result of the persecution. 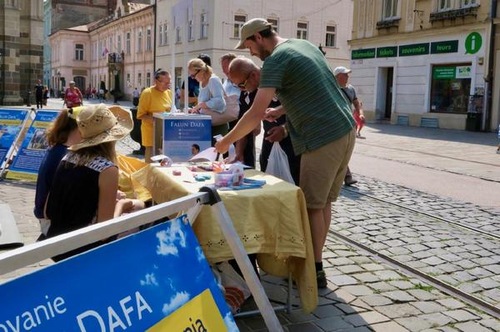 A woman in Prešov was so moved after hearing about the forced organ harvesting that, after signing the petition, she took leaflets and handed them to passersby. A family who lives in Ireland wanted to support such an important effort and signed the petition. Children were happy to get the origami lotus flowers. 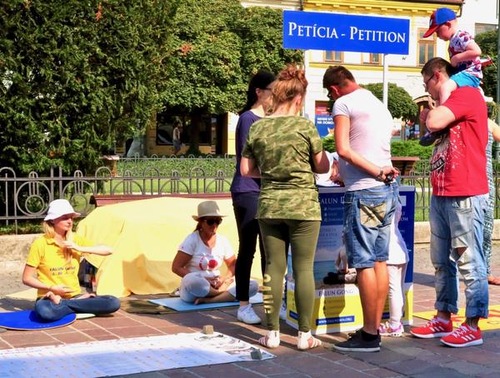