(Minghui.org) Shortly after the end of summer vacation, the Falun Gong exercise music could be heard on the campus of the Montessori School in Guasave in the state of Sinaloa.

Two Falun Gong practitioner volunteers were teaching the pupils how to do the fifth Falun Gong exercise, a meditation, in one of the school's large classrooms.

At the invitation of Principal Milian, practitioners have been teaching Falun Gong (which is also known as Falun Dafa) as part of the school's peace education classes for 3 years. 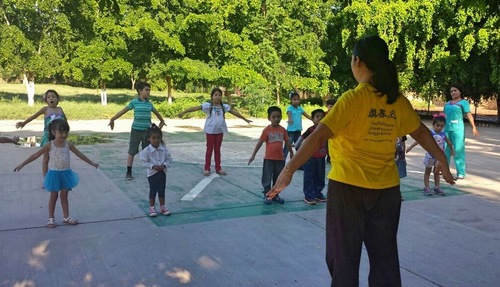 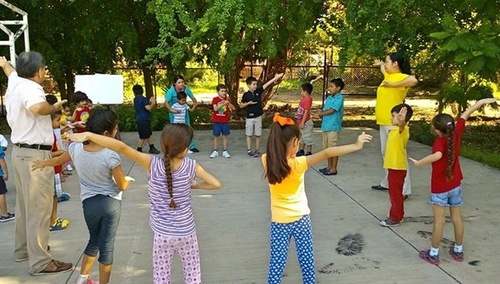 Pupils practicing the Falun Gong exercises at the Guasave Montessori School in Sinaloa on August 19, 2018.

The Montessori Method of education, developed by Maria Montessori, is a child-centered approach based on scientific observations of children and has been used for over 100 years in many parts of the world. Her method attempts to develop children physically, socially, emotionally, and cognitively in a thoughtful learning environment.

A class in peace is mandatory in each age group: 3 to 6, 6 to 9, and 9 to 12. Being a devoted Catholic, Milian had been looking for a good curriculum for the peace class because she was not satisfied with the status quo.

On one occasion, Milian went to a “Zhen-Shan-Ren International Art Exhibition” organized by local Falun Gong practitioners and learned about this traditional cultivation practice. Touched by the principles of Truthfulness-Compassion-Forbearance and accounts of nearly two decades of peaceful resistance to the persecution, Milian decided to invite practitioners to teach Falun Dafa at her school. 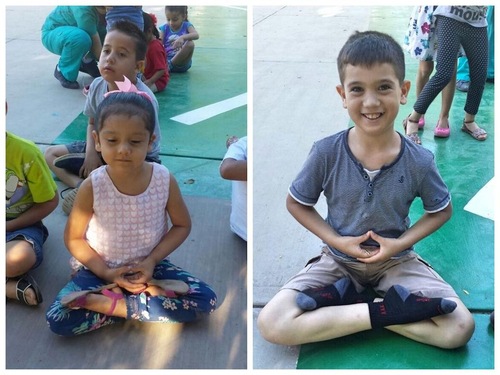 When the practitioners enter the classroom every Friday, they are surrounded by boys and girls calling out excitedly, “Falun Dafa is here!” After some warm hugs, the kids sit on the floor with their legs crossed to learn this ancient cultivation practice.

The practitioners come prepared with materials and ideas to better convey the concepts they are teaching.

“When one person speaks abusively to another, and pushes him around, he will give his virtue to the other party. It is given to him as compensation, since he counts as the victim in this circumstance, given that he suffered to some degree and it was at his expense. So while the one person is hurling abusive words in this dimension, in another, which corresponds to his body, a portion of his virtue is sent over to the other person and lands on his body. And the amount of virtue sent over will be proportionate to the severity of the abuse. The same happens with physical altercations as well.” (“The First Talk”)

To teach the concepts of virtue, a white substance, and karma, a black substance, they use sheets of white and black paper to represent these qualities that exist in another dimension.

Once when it was time to separate the pupils into two groups to demonstrate the exchange of virtue and karma, no one was willing to pretend to swear and thereby lose his or her white substance.

In another class, to demonstrate the process of letting go of attachments, the practitioners brought in a tub of water, bottles, and small pebbles. Each pebble had a bad human notion written on it, such as jealousy, showing off, competitiveness, and so on.

They put the pebbles into a bottle, twisted the cap on tight, and put the bottle into the tub of water. The pebbles made the bottle sunk to the bottom of the tub. They had to take out most of the pebbles before the bottle began to float.

“To help you picture what happens, imagine that there is a bottle filled with dirt and that’s capped tightly. If the bottle is tossed into water it will sink to the bottom. But if you pour out some of its dirt, and toss it into the water again, it will float up this time; and the more that’s poured out, the more it will float. Pour out all of it and the bottle will float all the way up.” (“The First Talk,” Zhuan Falun)

The boys and girls watched, listened, and understood.

They also play games and make crafts in the class to learn the concepts of Truthfulness-Compassion-Forbearance.

Before Christmas, they made paper lotus flowers and Christmas greeting cards. The children liked the story of the lotus flower that remains clean and pure even though its roots are in the mud. 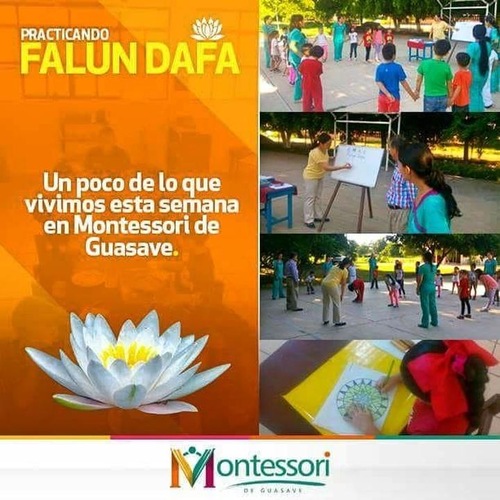 Principal Milian often expresses her thanks to the practitioners because her pupils really like the Falun Dafa class and she can see how valuable Falun Dafa's teachings are for today's world.

“Frankfurt Germany: “I Hope the Entire World Will Cherish Truthfulness-Compassion-Forbearance””