(Minghui.org) Falun Gong practitioners peacefully demonstrated the exercises in the pouring rain in front of Manhattan’s United Nations headquarters on Tuesday, with their golden exercise outfits shining through the fog.

It was the first day of the high-level general debate of the 73rd session of the UN General Assembly. Falun Gong practitioners took this chance to expose the brutal persecution in China to the international community, and request that world leaders help stop this human rights crisis that has been ongoing for 19 years. 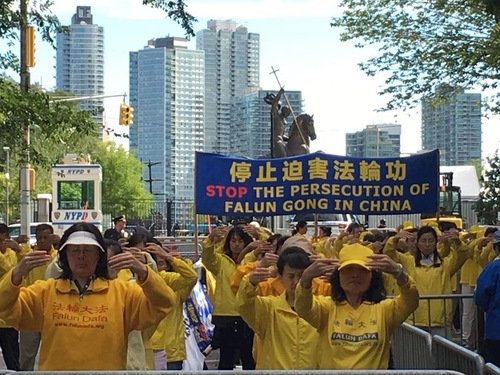 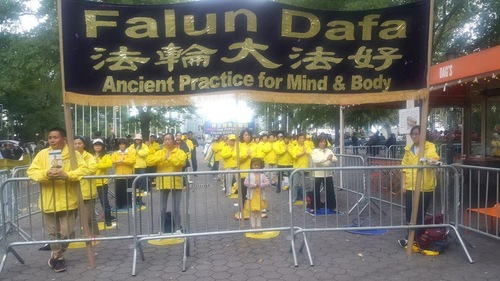 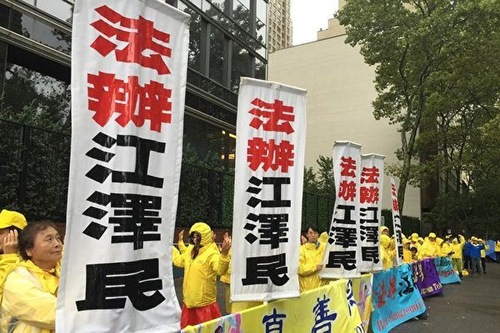 The banner reads “Bring Jiang Zemin to Justice.” Jiang is the former head of the Chinese Communist Party, who personally launched and directed the persecution of Falun Gong.

Famous Artist Calls for Bringing the Murderers to Justice

Liu Xitong, a famous artist from Qingdao, China, who escaped to the U.S. three months ago, joined the appeal. 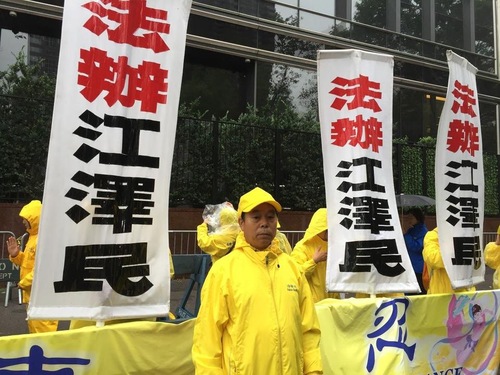 Mr. Liu in front of the UN Headquarters.

Because of his Falun Gong belief, Mr. Liu was arrested during a personal art exhibition in 2007. He was imprisoned in a forced labor camp for three years and sentenced to a four-year prison term. He has been arrested more than 20 times. In prison, he was badly tortured. He was tied up to an iron frame for 80 days, beaten to the point of deafness, deprived of sleep, poked with needles underneath the finger and toenails, burned with cigarettes, force-fed feces, etc.

In the free world, Mr. Liu is excited to make his voice heard, saying, “Stop the persecution, and bring Jiang Zemin to justice.”

Ms. Lu Caiyun, who escaped from Shandong, China to the U.S. six months ago, called for help in rescuing her sister-in-law Wang Haiyan. Wang was arrested in May 2018, when talking to people about Falun Gong. She was tried by a court in Qinhuangdao, China on Wednesday.

Lu Caiyun said that many Falun Gong practitioners in Qinhuangdao have been arrested recently. She has tried to raise awareness and hopes that the world leaders will pay attention to the practitioners who are imprisoned in China.

Former Fire Police Officer: “It is our responsibility to expose the persecution”

Mr. Wang Bingwen, who came to the U.S. one month ago, was a fire police officer in China. He was fired from his job during the persecution of Falun Gong. His apartment was taken away, and he was arrested and imprisoned many times.

He was sent to forced labor camp for three years in 2003, right after his wife got pregnant.

“I didn't have a chance to see my child until she was two years old,” he said. “In the labor camp, Falun Gong practitioners suffer from all kinds of tortures, including beatings, force-feedings with chili powder, electrical shocks, sleep deprivation, and burning with cigarettes. Once I was deprived of sleep for two weeks. As soon as I closed my eyes, they beat me.

“The Communist Party tortures our bodies, but it cannot change our hearts. It is our responsibility to expose the persecution.”

Western Practitioner: “This concerns everybody”

Nemanja Rebic is a musician from Serbia who has practiced Falun Gong for eight years.

He said, “Practicing Falun Gong has improved my health, and I have become a better person, because I follow the guiding principles of Falun Gong, Truthfulness-Compassion-Forbearance. People like me are being persecuted in China. They haven't done anything wrong. This persecution is completely unlawful.”

“The persecution not only has negative impacts on China, but also on everyone in the world. Many people in Western society do not know that a lot of products they buy are made in Chinese prisons. Prisoners of conscience are forced to do heavy labor. It is important for people to learn that innocent people are being tortured.”

Rebic added, “Much evidence has shown that the Chinese government harvests organs from living Falun Gong practitioners for profit. It is a crime that has never been seen in the world.”

During the UN session, local Falun Gong practitioners held activities at several places in Manhattan, most of which were intersections that the world leaders would pass by. Practitioners held banners calling for help in stopping the persecution.

When President Trump's motorcade passed the intersection of Second Ave and 53rd Street on Tuesday, Wednesday, and Thursday, practitioners waved to him, and they saw that the president waved back to them too.

Practitioners also held banners in front of the Chinese officials' hotel. Wang Yi, the Chinese minister of foreign affairs, and his staff have seen these banners multiple times.

Yi Rong, chairwoman of the Global Service Center for Quitting the Communist Party and a Falun Gong practitioner, said, “We are doing this not only for ourselves but also for all the Chinese.”

She said, “The 19-year of effort is effective. More and more Chinese have learned what Falun Gong really is. They have recognized the evil nature of the Communist Party. Up to today, more than 310 million Chinese, from the grassroots level to high-ranking Party officials, have quit the Party and its affiliated organizations.