(Minghui.org) Falun Gong practitioners in Philadelphia held activities in Chinatown on September, 15, 2018, introducing this traditional cultivation practice and exposing the Chinese Communist Party's (CCP) persecution. Pedestrians passing by learned about Falun Gong from banners, introductory flyers, and by listening to Falun Gong practitioners’ speeches. Several practitioners shared their personal experiences of regaining good health through practicing Falun Gong, and their stories of being persecuted in China. 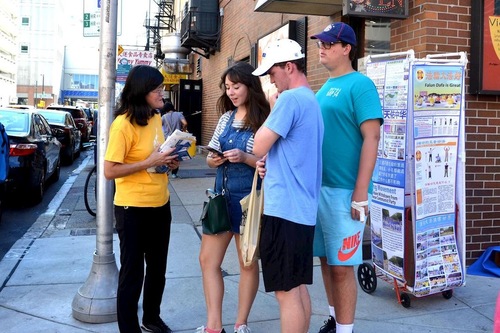 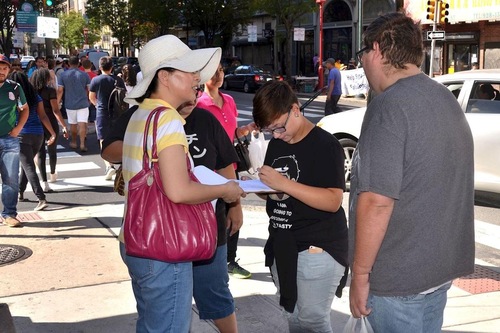 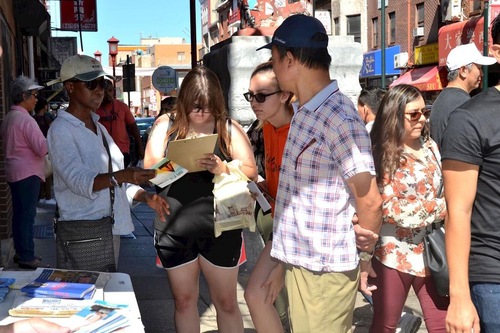 A passersby signs a petition calling for an end to the CCP’s atrocity of organ harvesting from living Falun Gong practitioners.

Mr. Zhang added, “I believe it's true that the Chinese Communist Party has killed Falun Gong people for their organs. There is a large demand for organs and it's lucrative. The Communist Party has made a lot of money from Falun Gong organs. Your activity is meaningful. It gives people a chance to learn these facts. Your truth clarification gives China hope!”

“We Should Fight for Them!”

Mr. John Parsons and his wife Susan signed the petition calling for an end to the organ harvesting. Mr. Parsons said, “We are Catholic. We think faith is the most important in life, but the Chinese Communist Party has deprived people of their belief and joy. Organ harvesting is appalling! It's a crime like the Nazis! It's absolutely horrible!” He thanked Falun Gong practitioners for telling him about the persecution. “I'm saddened by the persecution. All Americans should know it.”

Susan added, “People have the right to pursue their dreams and beliefs. The government has no right to interfere. Organ harvesting is extremely terrible! I'm sad. We need to fight for the people who can't fight for their own rights.” 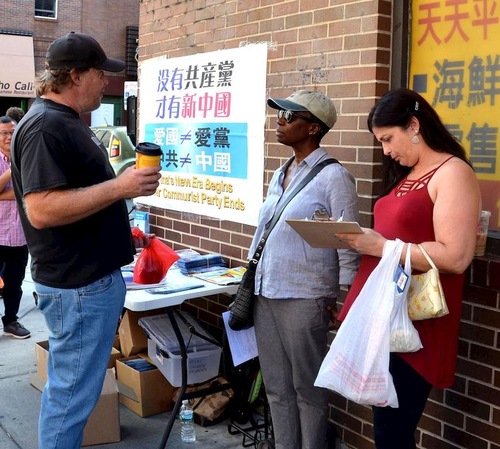 Falun Gong practitioner Ms. Li Lian recounted her personal experience with the persecution. She had been arrested for distributing truth-clarification flyers in January 2007. During custody, the police stuffed her mouth with rags and tied her to the floor with a chain for five days. She couldn't stand straight, or lie down to sleep. Her hands and wrists were completely swollen. She was later thrown into Masanjia Forced Labor Camp for 18 months. There she was forced to do slave labor for more than ten hours per day. Her hands were in so much pain and exhausted that she couldn't even hold a bowl or sleep at night. During the time she was forced into a brainwashing session, she was handcuffed to a heating pipe during the day, and to a bed at night. She was also deprived of using the bathroom. She had been injected with unknown drugs which made her almost lose her memory.

Falun Gong practitioner Zhang Chunying said during her speech that she had been arrested, harassed, and extorted multiple times by the CCP police when she was in China. The local police not only harassed her at home, but also assigned her boss to monitor her, and paid one of her neighbors to monitor her. One day in November 2007, she and her fellow practitioners were on their way to a law firm, when two police cars stopped them and forcibly took them to a police station. The police searched her home when no one was at home. Chunying was also forced to do slave labor in a detention center. Her family was extorted.

Falun Gong practitioner Cui Hong had also been arrested several times, thrown into a labor camp and sentenced to three and a half years in prison for distributing Falun Gong flyers. She was deprived of sleep and bathing while in custody, and often beaten and insulted. Most of her teeth became loose and some were knocked out due to beatings.

““We Sense Peaceful Nice Energy from Your Booth””