Fremont, California: Introducing Falun Dafa at One of the Biggest Arts Festivals West of the Mississippi

(Minghui.org) Falun Gong practitioners participated in the Fremont Festival of the Arts on August 4-5, 2018 along with over 500 vendors to introduce this meditation practice and to raise awareness of it being persecuted in China. As one of the biggest art and wine festivals that is west of the Mississippi, this 35th annual event attracted nearly 400,000 people in two days. 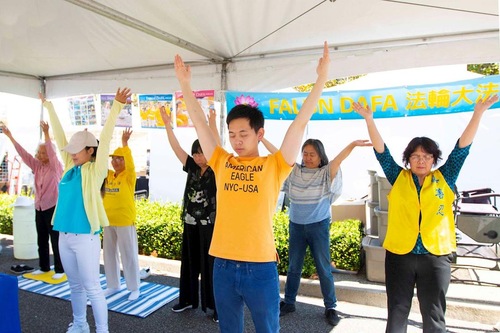 Exercise demonstration at Fremont Festival of the Arts.

Peaceful Exercises that Benefit Everyone

Despite the high temperatures, many people stopped to talk with practitioners and learn the exercises. Indian immigrant Deepak Kapoor said the exercises were peaceful, and an improvement to the mind and body. He thought that they would benefit everyone. He signed a petition calling to stop the persecution in China.

After hearing of the persecution, especially forced organ harvesting, Steven Raymakris and Veronica Rudlraia signed a petition to help practitioners. “What the communist party did is wrong and it is against humanity,” remarked Raymakris. He was glad to see practitioners raising awareness of this atrocity. Rudlraia agreed, “Tragedies like this are against our laws. We have to stop it.”

Michael, who often goes to China for business, came with a friend. He had heard about Falun Gong and the suppression. “These practitioners are doing meditation to become better people and for better health. The persecution should not have happened.” 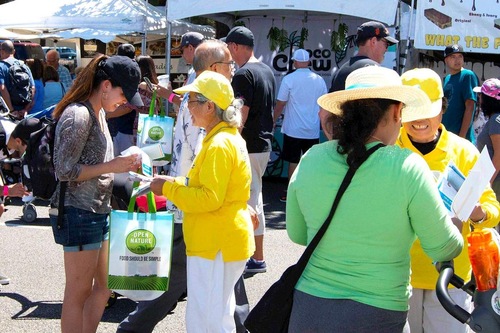 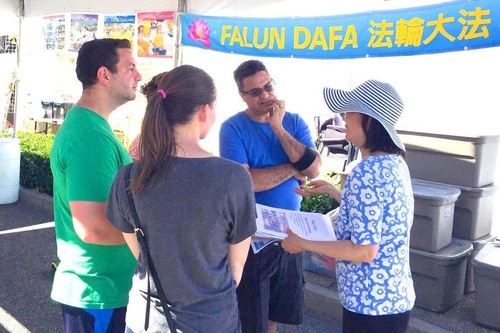 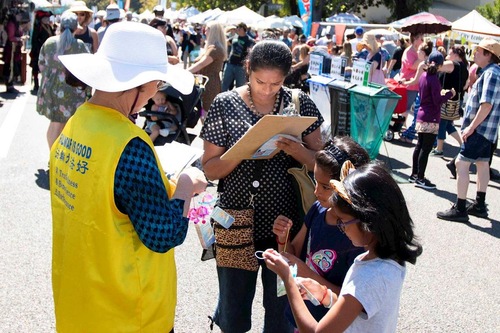 People talk with practitioners about Falun Gong and sign petitions calling to stop the persecution.

A Window to See Facts

Many Chinese residents and tourists came to the festival. Surprised to see Falun Gong practitioners, they stopped to look and some accepted materials.

One couple from Guangdong Province took a pamphlet and said they knew about the suppression launched by former communist party leader Jiang Zemin. They did not know that the brutality is still continuing and that the forced organ harvesting is happening to practitioners. Before leaving, they thanked practitioners for telling them the information.

One man from Taiwan said he often saw events of practitioners. “In Taiwan, we all know Falun Dafa is great,” he added.

Tourist: Freedom of Belief Is Important

Leni Beck, a nurse from Germany, said she is aware of organ harvesting from living practitioners in China. She once took petition letters to the hospital asking all doctors and nurses for signatures.

“All of them signed because we saw this the same way—forced organ harvesting is wrong,” she continued. She said Germany should stop trade with China until this tragedy stops.

“Freedom of belief is very important and you cannot put people in labor camps or prison because of that.” Beck said she had looked up Falun Gong on the internet and the mistreatment of practitioners often brought her to tears. “We have to step forward and do something about this,” she tearfully added.

“Getting Rid of Resentment”