(Minghui.org) Falun Gong practitioners in Milwaukee participated in the 6th annual Indiafest in Humboldt Park on August 18, 2018. They introduced Falun Gong, exposed the Chinese Communist Party's (CCP) persecution of the practice, and collected signatures on a petition calling for its end.

A continuous stream of people visited the Falun Gong booth. People were interested to discover that Falun Gong is a cultivation practice for body and mind based on the principles of Truthfulness-Compassion-Forbearance.

Many visitors were baffled by the CCP's irrational persecution of Falun Gong and appalled by its crime of harvesting organs from living Falun Gong practitioners. Many people signed a petition calling for an end to the atrocities.

A woman said in tears, “I can't stop crying. It's hard to imagine some people in China are suffering so much today. It must stop immediately!”

Practitioners also demonstrated the Falun Gong exercises. Many spectators said they wanted to learn the exercises. 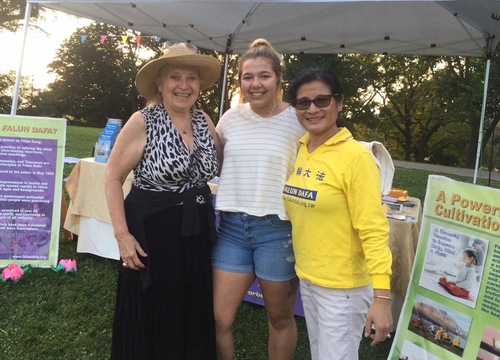 Vera (left) and Kali (middle) with a Falun Gong practitioner

A woman named Vera signed the petition and learned Falun Gong exercises at the event. Vera had been doing meditation for years. She told a practitioner, “This exercise is great!”

“A Former Prisoner Learns Falun Gong During Her Detention”