Falun Gong Events in Ireland, Norway, Germany, and the UK

(Minghui.org) People around the world who have benefited from the practice of Falun Gong, also called Falun Dafa, often volunteer to introduce the meditation to the public and raise awareness about the persecution of the millions of Falun practitioners in China, which has gone on since July 1999. The following are reports from Falun Gong activities in Ireland, Norway, Germany and the UK.

Falun Gong practitioners in Ireland gathered to do the exercises in downtown Dublin on August 18, 2018. Many people paused to watch and learn about Falun Gong. Upon learning about the Chinese communist regime's persecution of such a peaceful practice, many signed a petition to support Falun Gong. 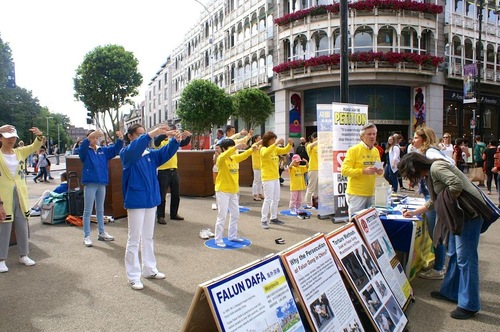 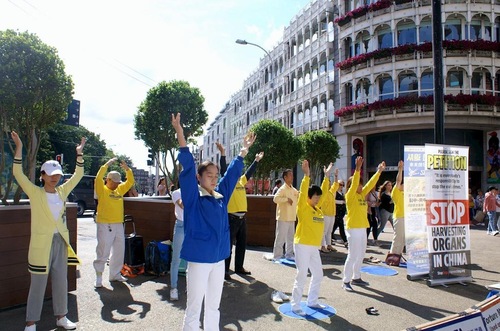 Falun Gong practitioners come together to do the exercises in Dublin, Ireland on August 18, 2018. 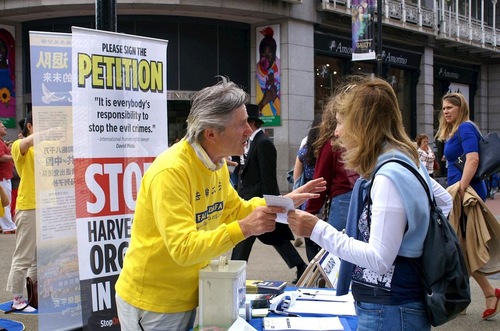 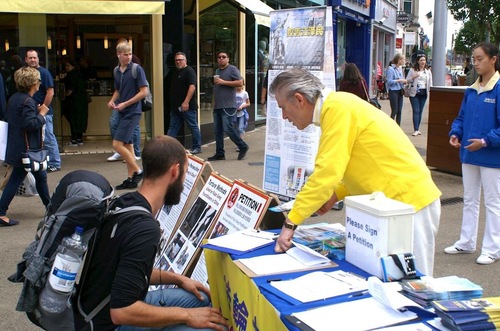 Passers-by learn about Falun Gong and talk with practitioners. 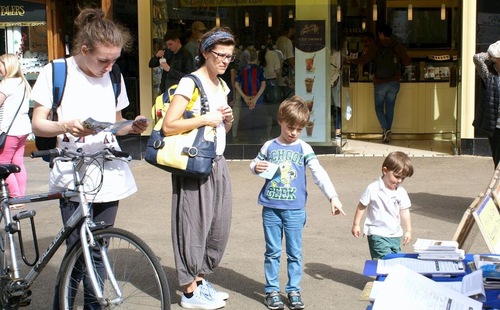 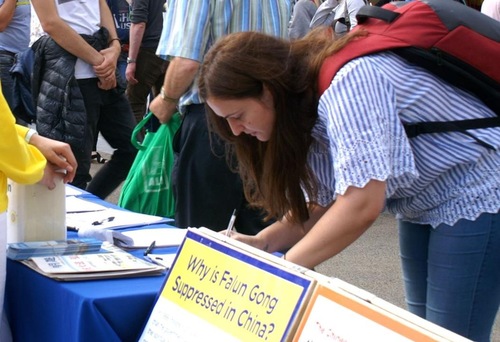 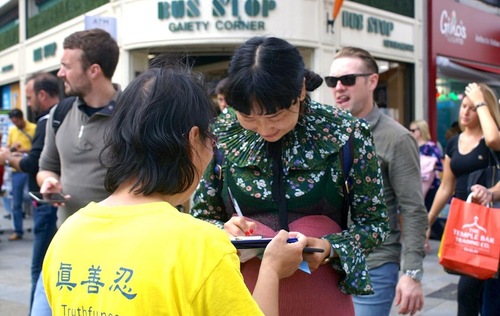 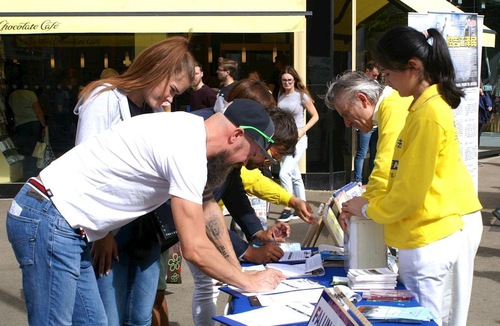 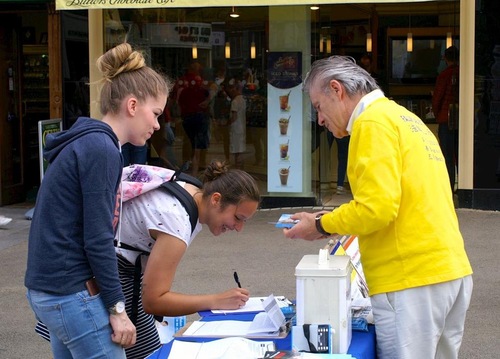 People sign a petition against the persecution in China 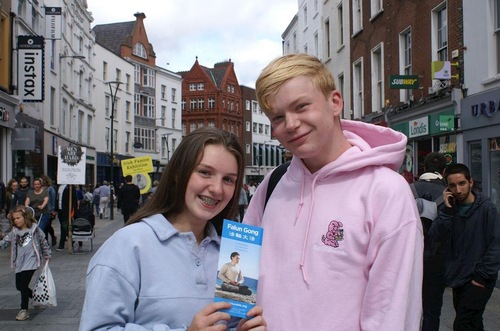 High school students Daniel and Eloise were glad to get information about Falun Gong and sign a petition against the persecution in China.

Ann Connolly, an elderly Irish woman, said that she felt very peaceful while watching Falun Gong practitioners meditating. With a background in Taichi and yoga, she was eager to learn Falun Gong herself. She said that if there was a practice site in south Dublin where she lives, she would definitely go to learn.

A Chinese couple passed by. The man took a newspaper on Falun Gong and talked with a practitioner. To take a stance against the communist regime's abuses, he decided to withdraw his memberships in the Chinese Communist Party organizations he had joined as a youth. He said to the practitioner, “Keep up the good work!”

Arendalsuka is a week-long political event held annually in Arendal, a city in south Norway. It was held from August 13 to 18, 2018 this year. The annual event draws members of all major political parties, government agencies, charitable organizations, professionals and others in Norway. 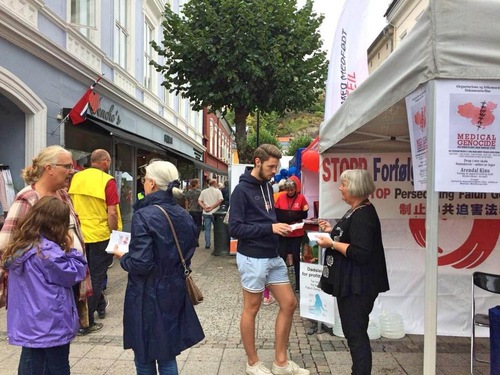 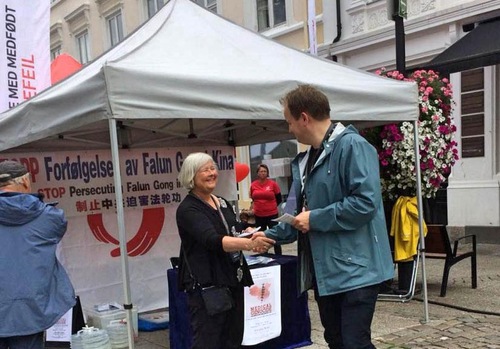 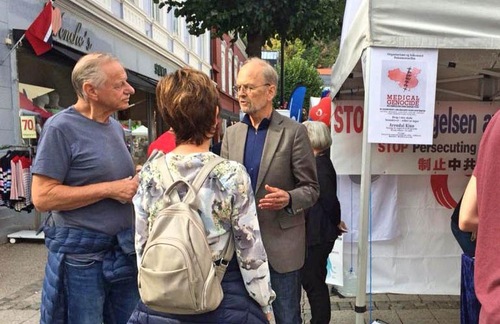 Practitioners set up a booth and introduce Falun Gong to the visitors of Arendalsuka from August 13 to 18, 2018.

Falun Gong practitioners held a booth to raise awareness at the event and invited visitors to attend a screening of a documentary on the Chinese communist regime's live organ harvesting crimes against Falun Gong and other prisoners of conscience.

The screening, held on August 16, was an eye-opener for many in the audience.

“I had never heard of the CCP's live organ harvesting from Falun Gong practitioners,” said Flora, a member of a Norwegian left-wing party. “My work is in the media and politics. I will post this news on our official website.”

Another screening attendee, Ms. Ingrid, was also alarmed by the atrocities. She said, “It’s terrible. It’s just inhuman. Thank you for coming here to tell us this. I will tell this to my friends and family! My son is a surgeon. He lives in Stavanger and is famous there. I will definitely tell him about the live organ harvesting in China.”

Falun Gong practitioners from Bavaria hold an information day every month at Neuschwanstein Castle, a well-known tourist destination in Germany. They raise awareness about the persecution to tourists from all over the world, especially mainland China. The last events held were on July 8 and August 15, 2018. 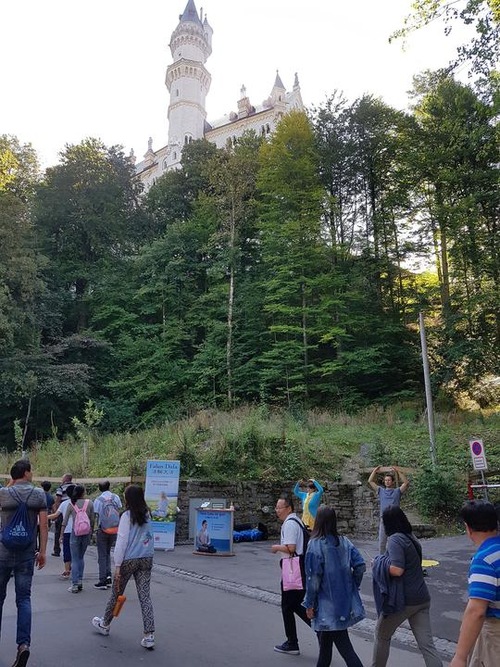 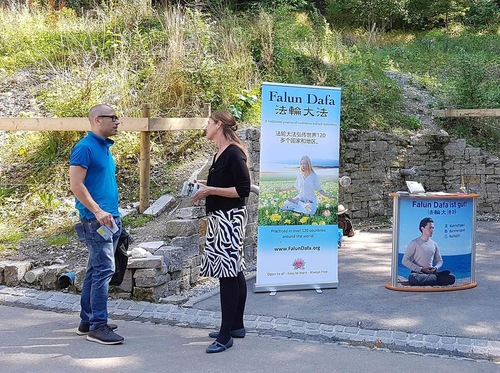 “When we do the exercises, Chinese tourists often take pictures. Many of them read aloud the words on the banner, 'Falun Dafa is good' in Chinese. We can tell that fewer of them have misconceptions about us, compared to the past,” said Falun Gong practitioner Ms. Zhao who often participates in this event. She said they are particularly interested when they see Westerners doing the exercises.

A Practice Site in London, UK

Hyde Park is a historic Royal Park in central London, founded by Henry VIII in 1536. Three years ago, the Buckhill Shelter, a brick-and-wood corner pavilion in Hyde Park, was chosen by Falun Gong practitioners to be an exercise site. It takes five minutes by foot from the central London metro station Lancaster.

In the past three years, several Falun Gong practitioners have taken turns maintaining this exercise site. They come here every Wednesday from 12 noon to 3 pm to do the exercises and offer free instruction.

On August 15, 2018, practitioners Nathalie and Mr. Yang, who is pursuing a doctoral degree in London, came to Hyde Park to do the exercises. 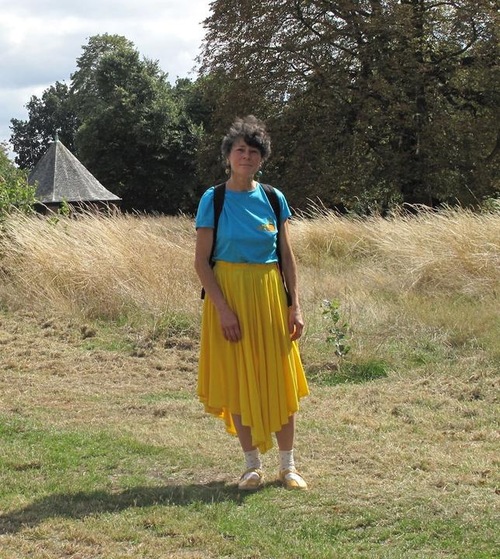 Nathalie in Hyde Park on August 15 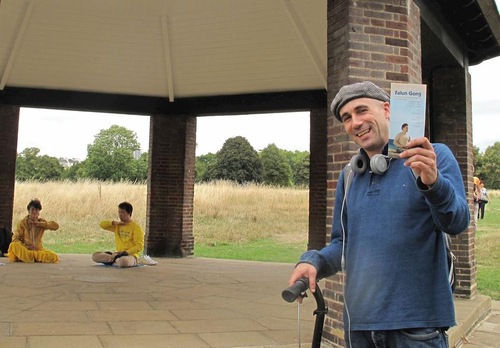 Alex, an Italian working in London, comes across Falun Gong for the first time in the park on August 15.

Alex, who works in London, was drawn to the Falun Gong meditation in the park. He said that he felt the energy of the practitioners.

“This is true calm,” he said. “You know how busy Londoners are and how much stress people live under.” He said that he had read books on Buddhism, Hinduism, and yoga, and he is naturally sensitive to energy. His intuition told him that Falun Gong is not ordinary.

“I know that there are techniques for people to control their own thoughts. I understand this in theory, but I have never tried it myself.”

Learning that Falun Gong is practiced in more than 100 countries around the world and there are fifteen practice sites in London, Alex said that he will learn more about Falun Gong online because he longs for such positive energy.

Minghui.org has confirmed the deaths of thousands of Falun Gong practitioners in the persecution over the past 18 years; the actual number is suspected to be much higher. More have been imprisoned and tortured for their faith. Evidence shows that the CCP harvests organs from detained practitioners, who are killed in the process, to supply the organ transplantation industry.

“How I Understand the Process of Cultivating Away Attachments”