(Minghui.org) Today's news from China includes incidents of persecution that took place in 7 cities or counties in 7 provinces. According to this report, 5 Falun Gong practitioners were subjected to mistreatment during their detention, and at least 3 were illegally arrested. 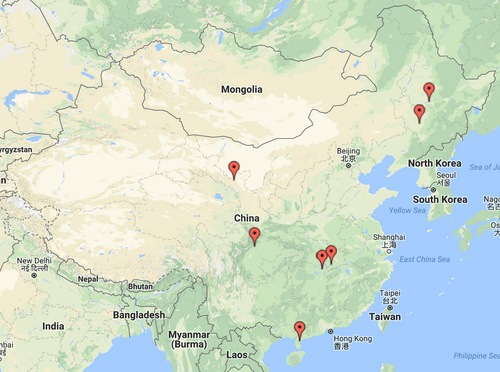 Mr. Feng Biao was officially arrested by the Pre-Trial Division, Erdao District Police Department, on August 6, 2018. His case has been turned over to the Erdao Procuratorate.

Ms. Xu Zhonghui and Ms. Chen Dehua, from Wudu Town, were arrested by officer Wu Yang and others from the Zhonghua Town Police Station on August 4, 2018, while they were talking to people about Falun Gong in Zhonghua.

Ms. Xu and Ms. Chen were taken to the Longqiao Village Detention Center in Sanhe Town for 15 days of detention.

Ms. Chen Haixia was arrested for talking to people about Falun Gong in Leizhou City. Her home was ransacked. She was sentenced to a seven-year prison term by the Chikan District Court.

Ms. Chen's family hired a lawyer and filed an appeal with the Zhanjiang City Intermediate Court.

Ms. Fan Wenxiu's health considerably deteriorated after being brutally tortured in the Changsha Women's Prison, and she suddenly passed out a few weeks ago. The prison officials told her family to go to the Changsha Prison Hospital to sign documents on her behalf.

She had surgery on July 27, and the doctors found that her large intestine was perforated, and they removed a tumor from an ovary. Subsequent tests indicated that the tumor was malignant and in the late stages, and no medical treatment was possible.

The prison officials notified Ms. Fan's family to apply for medical parole and take her home. She was released on July 30, 2018, and her family took her to a local hospital for treatment.

Mr. Shen Guozhong, an employee at the Jinchang City Power Supply Bureau, was arrested by officers from the Jinchang Domestic Security Division at the end of 2017, for producing Falun Gong informational materials. He was taken to the Jinchang Detention Center.

Mr. Shen was secretly tried in the Yongchang County Court in July 2018, and was sentenced to a five-year prison term. He has appealed.

Mr. Shen is still being held in the Jinchang Detention Center.

Mr. Zhao Haijun from the Shuangcheng District was sentenced to an eight-year prison term and has been incarcerated in the Hulan Prison for over two years. He has recently been experiencing pain and cannot eat. He has lost a lot of weight and is in critical condition.

Mr. Kong Shenglin was arrested by officers from the Yong'an Police Station while he was talking to people about Falun Gong on August 5, 2018. He was taken to the Xian'an Detention Center for seven days of detention.