(Minghui.org) Today's news from China includes incidents of persecution that took place in 8 cities or counties in 6 provinces. According to this report, 6 Falun Gong practitioners were subjected to mistreatment during their detention, and at least 9 were illegally arrested. 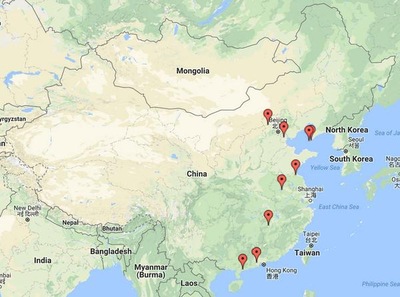 Mr. Yu Rongxin and his wife Ms. Xie Qing were arrested on September 18, 2017. They were taken to the Jiangmen City Detention Center. Their cases were turned over to the Jiangmen Procuratorate on June 28, 2018.

Ms. Cui Ruqin from the Hebei District was arrested at her home by officers from the Wanghailou Police Station on the afternoon of August 1, 2018.

Ms. Wang Shuangmu from the Ganyu District was arrested on October 3, 2017, for filing a criminal complaint against former Chinese Communist Party leader Jiang Zemin, for initiating the persecution of Falun Gong.

Ms. Wang was sentenced to an 18-month prison term.

The head of the Fenyi County Domestic Security Division Xie Jianbin, officer Zhong Xiaohong, and others from the Chengxi Police Station broke into four practitioners' homes and arrested them on the afternoon of July 16, 2018. The officers confiscated computers, printers, Falun Dafa books and informational materials.

The four practitioners were taken to the Fenyi Detention Center.

Mr. Liu Xiaoxiong, 32, was deceived by Qixianling Police Station officers to go to the station and get his residence permit on the afternoon of July 25, 2018. He was arrested as soon as he arrived.

Ms. Liao Jie from Changling, Zhuanghe City was reported to the authorities for talking to people about Falun Gong. She was arrested by officers from the Ronghuashan Town Police Station.

Ms. Ling Xiu from the Dianbai District was arrested by the director of Poxin Town Police Station Yang Pengchang, and other officers on April 16, 2018. She is being held in the Maoming City No. 1 Detention Center.

The three practitioners were sentenced to prison on July 25, 2018.

Mr. Zhang Qinyou from Fengtai County was reported to the authorities while distributing Falun Gong materials on July 26, 2018. He was arrested and taken to the Fengtai Detention Center.

“Realizing Those Around Us Act as Mirrors on Our Cultivation Path”