(Minghui.org) The beautiful Bulgarian city of Varna, known as the “Sea Capital” of Bulgaria, hosted the country’s seventh annual Falun Dafa Experience Sharing Conference on July 15, 2018. It was attended by practitioners from Bulgaria and Russia.

Fifteen of the practitioners shared their personal cultivation stories of how they improved after following the Falun Dafa principles of Truthfulness-Compassion-Forbearance in their daily lives. They discussed the challenges that they went through and successfully overcame. 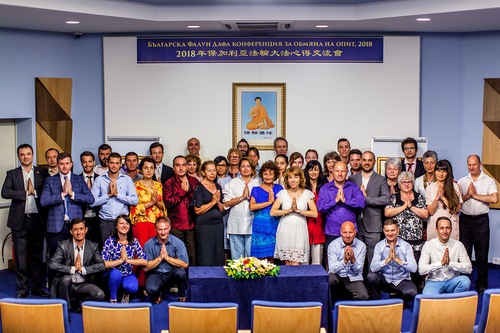 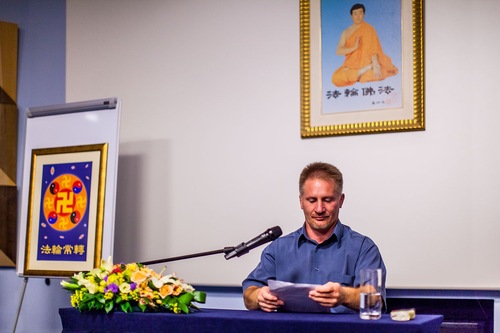 Kostadin, a practitioner serving a life sentence at Stara Zagora Prison, submitted a sharing paper for the second time. He wrote about his tribulations after being transferred from solitary confinement to a common cell with other inmates. “I have had quite a few hardships when it comes to forbearance and cultivation of speech in the surroundings that I am in. I have been provoked on an hourly basis, but I try to always treat myself as a practitioner and remind myself of Teacher’s words:

“The cultivation of speech that we teach refers to: that which involves one’s reputation and personal gain that cannot be given up among everyday people, that which has nothing to do with the actual work of cultivators in society, the senseless gossiping among cultivators in the same school of cultivation, attachments that cause one to show off, hearsay or circulating rumors, or those discussions on some social issues that one is excited about.” (“Cultivation of Speech” from Zhuan Falun)

He also wrote that twelve prison inmates get together for two hours every week to practice Falun Dafa as a group. 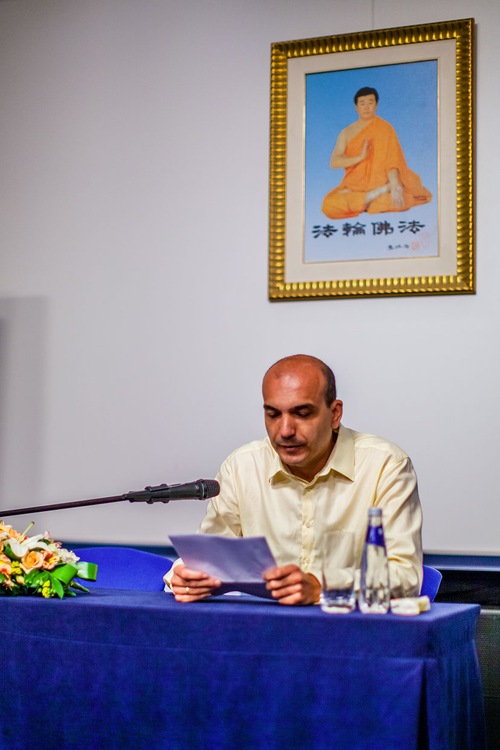 Radoslav, a veteran practitioner from Sofia, shared how he managed to overcome the obstacles in his mind that made him reluctant to cooperate with other practitioners. This resulted in his environment changing immediately. “I helped to prepare the presentation of the Nine Commentaries on the Communist Party. In the course of the preparation, I managed to meet with a former Prime Minister of Bulgaria and introduced it to him. He took it and promised to read it. Years ago I had unsuccessfully tried to reach out to our political leaders. This time I saw that the good teamwork had created an environment to achieve that easily.”

Sergey, a veteran practitioner from Russia, shared about clarifying the facts about Dafa to government officials. “Due to the lies spread by Chinese diplomats, our Russian officials started making unfavorable decisions about Falun Dafa. They did not agree with our activities, forcibly kicked the Chinese practitioners out of the country, and turned the police against us. Only then did we realize the necessity of clarifying the truth to the international departments at the Ministry of Internal Affairs and other key government offices. But in Russia, it is extremely difficult to reach high government officials.”

“One day I was walking in downtown Moscow with truth-clarification materials in my pocket. I passed by Moscow City Hall and decided to walk in and contact the International Affairs Department. It looked impossible, but I did not have any sense of fear. I knew I was a Dafa disciple who came to give the government officials a chance to make the right choice.”

“I called the office manager of the International Affairs Department and started sending righteous thoughts while waiting. A miracle happened! They let me through right into the office of the head of the International Affairs Department at City Hall. The meeting went well. He listened to what I had to say and was moved by the facts of the persecution of Falun Dafa in China. He also promised to forward them to his colleagues who were in charge of China affairs.”

Sergey mentioned another occurrence in 2007, when Russian practitioners tried to clarify the truth to Russian immigration authorities regarding the forced deportation of a few Chinese practitioners. However, meeting with them was close to impossible.

“At that time, I was looking to buy a car and found one through a newspaper ad. I met with the car’s owner and wanted to clarify the truth about Falun Dafa to him. To my surprise, he knew about the practice because he was an immigration officer in charge of collecting data about Falun Dafa. It was unbelievable! I had truth-clarification materials with me and gave all of them to him. I was so touched by the great compassion of our benevolent Teacher, who granted me the opportunity to do the impossible.” 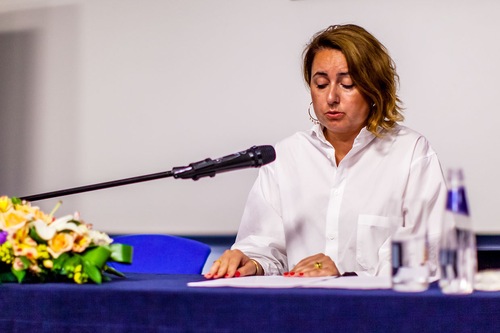 Kremena, who has practiced Falun Dafa since 2001, shared that because of all the difficulties in clarifying the truth after the persecution began, she felt that her cultivation had actually started only after she moved to Sweden. She realized that all her tribulations resulted from low self-esteem, fear of rejection, and seeing the hardships as punishment by the old forces instead of looking at them as opportunities for improvement.

“I’ve realized I had to be truly happy when meeting with tribulations instead of being afraid of them, and perhaps my old mindset caused me to follow the arrangements of the old forces, who want to punish people for their mistakes and test their determination. They did not want me to succeed in my cultivation. All this happened to help me sever my human way of thinking. Otherwise, I would have been unable to advance in my cultivation,” Kremena said.

The following are cultivation experiences shared by new Bulgarian practitioners who diligently participate in truth-clarification and other activities. 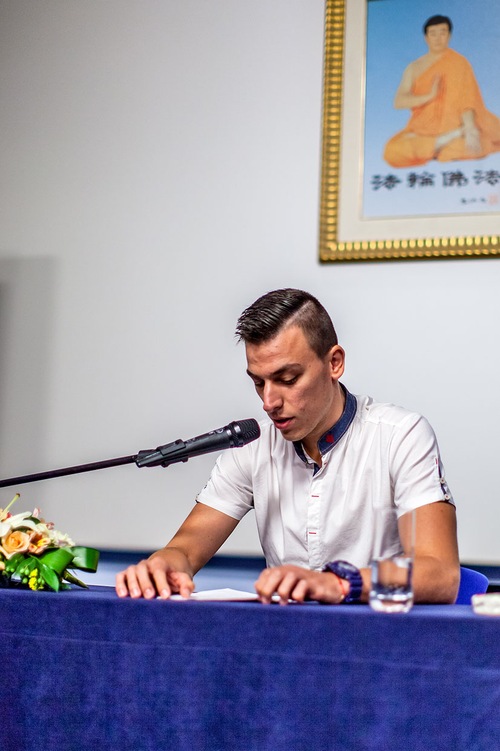 Dinko, from the city of Stara Zagora, has been following the principles of Truthfulness-Compassion-Forbearance for a year. Through the cultivation experiences shared by veteran practitioners, he realized how important it is to be steadfast in one’s practice. One night, he had a dream. “I saw my girlfriend, but in my dream, she was blue, with red hair. She said to me, ‘In the beginning, my intention was different, but now, after understanding how comprehensive and precious this practice is, I know that Falun Dafa is good.’ I looked at my feet and saw two snakes crawling, but I was not scared at all. I have had dreams about those snakes before, and they tried to bite me, which made me recognize that before I practiced, I had the intention and pursuit of supernormal abilities to show off. After this attachment was shown to me, I managed to remove it. When I woke up, I felt tremendous relief and calmness.” 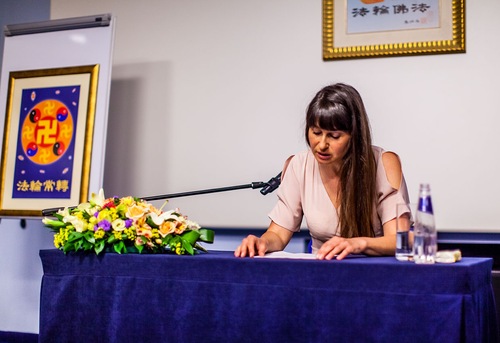 Moni spoke of how Falun Dafa helped her overcome the tragedy of losing her mother at the age of seven. She was forced to mature early because her father remarried and changed his attitude. Moni had to learn how to live with a hostile stepmother. Bound to her past, she was lost, full of anger, and had a sense of injustice. “I was looking at the faces of strangers, hoping to find a piece of the beauty of my mother’s face. I could not forgive. Falun Dafa helped me find every piece of my mother in the beautiful faces of practitioners.”

Thanks to their moral support and proper upbringing by her grandparents, she took the path of Truthfulness-Compassion-Forbearance. 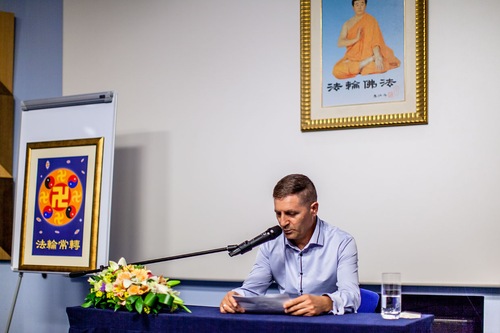 Zdravko managed to overcome a negative attitude toward his mother thanks to Falun Dafa. They often had conflicts and unpleasant situations. “There was a Falun Dafa presentation in the city where my mother and my oldest brother lived. After we met as we previously agreed, my mother and I got into a negative predicament once again. I tried to follow the Falun Dafa principles and not get into a conflict,” said Zdravko. He remembered Teacher’s words about not treating her as his mother when clarifying the truth to her, but as a sentient being who needed to be saved. He also remembered that having pure and sincere thoughts when clarifying the truth leads to positive results. For a few months now, Zdravko’s mother has studied Zhuan Falun and practices the exercises daily. Three of his family members now actively practice Falun Dafa. 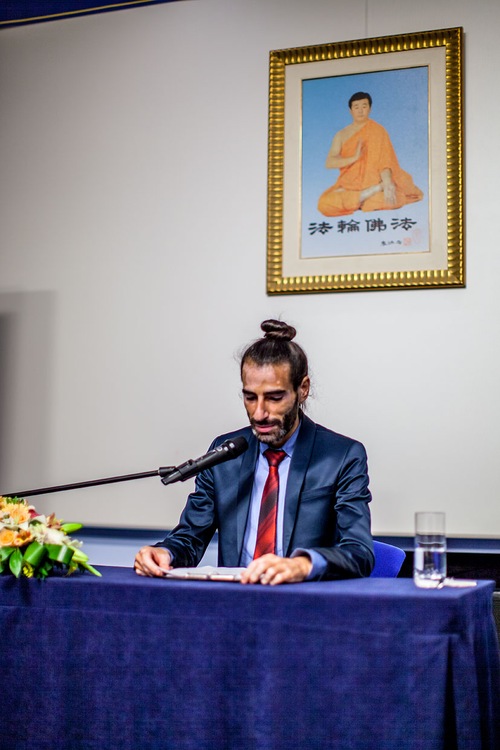 Conference host Martin reads the sharing papers of Sergey from Russia and Tsvetomir from Varna.

Tzvetomir, from the city of Varna, shared how he managed to find balance between his married life and his practice. “I have had so many conflicts with my wife because all I wanted to do was practice, as if nothing else in my life was important. I wanted to go to Fa study and practice five days a week. I then realized that this was going to extremes and I needed to find a balance. I enlightened to the fact that I had to conform to ordinary people’s way of life. I decided to go to group practice only three days a week and suggested that my wife choose three days to be together. She happily agreed, and our marital relationship subsequently became much more harmonious. We had no more conflicts on that matter.”

Before the European Experience Sharing Falun Dafa Conference in Paris last year, his wife was angry about his decision to attend. After looking within, Tzvetomir realized that he had lost the balance and decided to invite his wife to accompany him to Paris. She enthusiastically accepted, and they not only had time to do some sightseeing but she also had the opportunity to learn more about Falun Dafa. She now looks forward to accompanying him for the next European Falun Dafa conference. 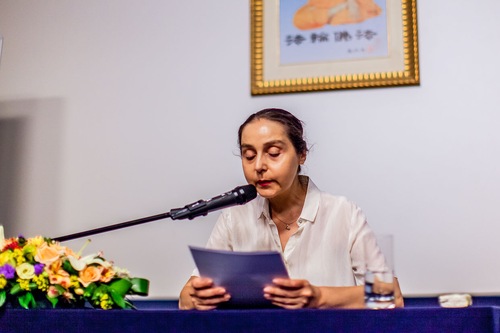 Gergana shared how she had practiced alone for three years before joining the group exercises at Borisov’s Garden in Sofia. She said, “The interaction with other practitioners reshaped my cultivation process. Our group experience sharing made my Fa study better, helped me recognize my attachments, and strengthened my confidence in the practice.” She now has a better understanding of Fa-rectification, her responsibilities as a practitioner, and the urgency of saving sentient beings. She thanked all the practitioners for their help and wished them success in their cultivation.

“Experiencing the Power of Reciting “Falun Dafa is Good””