(Minghui.org) Today's news from China includes incidents of persecution that took place in 16 cities or counties in 10 provinces. According to this report, 3 Falun Gong practitioners were subjected to mistreatment during their detention, and at least 31 were illegally arrested. 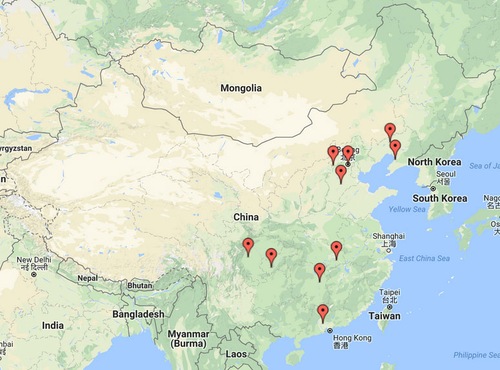 Ms. Liu is being held in custody.

Mr. Yu Kaixin was arrested by officers from the Chenglonglu Police Station in May 2018. He is being held in the Pi County Detention Center.

Ms. Zhong Ping was arrested by officers from the Xiangmihu Police Station in the Futian District on July 21, 2018.

Ms. Jin Hua was arrested in Datong City in March 2018.

Mr. Meng Lanzun from Weiqiao Town was arrested while applying for an identity card at the Weiqiao Town Police Station on the morning of July 27, 2018. His home was ransacked.

Mr. Meng was held in the Shenzhou Detention Center for five days.

Mr. Wang Pingye from the Huangshigang District was arrested by officers from the Huahu Police Station on July 24, 2018, while he was distributing Falun Gong materials. He is being held in the Huangshi City Detention Center for 15 days of detention.

Ms. Zhang Quanhong and Mr. Cao, from Xiangtan County, were arrested by police officer Luo Quan on July 19, 2018. They were taken to a brainwashing center.

Ms. He Yuhua was arrested by officers from the Gaizhou Domestic Security Division on the morning of July 19, 2018. Her home was ransacked.

Ms. He was taken to the Yingkou City Detention Center.

Liangping District Domestic Security Division officers broke into Ms. Peng Zhuoyu's home and ransacked it on the afternoon of July 16, 2018.

Fourteen practitioners were arrested for refusing to renounce their belief. They were tried in the Songbei District Court, Harbin City on July 24, 2018.

Except for Shi Fenglan and Song Yuzhi, all the others are from Yilan County.

The practitioners' lawyers entered a not guilty plea for them, and the presiding judge said that he would issue a verdict within 10-15 days.

Ms. Deng's family vowed to appeal her case if she was sentenced to prison.

Ms. Yang Cuiling, Ms. Wang Yanxin, and Ms. Yue Shuxia, from the Yuanbaoshan District, Chifeng City, were arrested on November 5, 2017, for refusing to renounce their belief in Falun Gong. They were tried on March 27, 2018, and were later sentenced to prison.

The three practitioners were taken to the Inner Mongolia Women's Prison in mid-July 2018.

The three women appeared in court on June 28, 2018, and were recently sentenced to prison.

Ms. Sun Fangfang was released on July 28. Her mother's term was set to finish on August 13, but the court notified her family to pick her up right after the verdict was announced.

Mr. Zhang Guanghu was arrested while talking to people about Falun Gong on December 26, 2017. His wife hired a lawyer to defend him, but the Liangzhou District Court secretly tried Mr. Zhang ten days later, without informing his lawyer and family members.

Mr. Zhang has been detained for over six months.

A fifth trial was to be held for Ms. Hao Mingmei on July 20, 2018, but it was canceled due to heavy rain. The judge was stuck and had no way to get to the court.

Ranghulu District Court tried Ms. Hao three times in November and December 2017. Ms. Hao raised many questions during the third trial. The court could not announce the sentence as planned, and the case dragged on for over five months.

The court planned to hold the fourth session against Ms. Hao on May 14, 2018, but the lawyer and Ms. Hao refused to attend. No verdict was reached.

Mr. Liao Songlin, in his 70s, was arrested by twelve Beihu District Domestic Security Division officers on the morning of July 19, 2018. Five officers went to ransack his home and confiscated Falun Dafa books, pictures of the founder of Falun Dafa, and informational materials

Mr. Liao is being held in the Chenzhou Detention Center.

Mr. Liao has been persecuted before for his belief. He was taken to a brainwashing center in 2001. He was arrested in August 2002 and held in the Chenzhou Detention Center. The Beihu Court sentenced him to three years in prison on September 6, 2003. Mr. Liao was sentenced again to four years in prison in 2008.

“3,628 Falun Gong Practitioners Arrested or Harassed for Their Faith in the First Half of 2018”

“Encountering Police Officers Who Know the Truth Behind the Persecution”