(Minghui.org) The month of August is the height of the tourist season in Europe, with people from around the world visiting museums and galleries and enjoying local community festivals. Falun Gong practitioners across the continent have taken the opportunity to reach out to visitors to introduce this traditional mind-body cultivation practice and expose the persecution of the practice in China.

The largest annual outdoor music festival in Europe, the Polish Woodstock Music Festival, was held in Kostrzyn, Poland, on August 2-4. Nearly 200,000 music lovers come to this small town to enjoy days of music, community, and friendship.

Falun Gong practitioners from Poland, Germany, Czech, and Slovakia have been invited to introduce the practice at the music festival for the past three years.

Besides demonstrating and teaching the Falun Gong exercises, practitioners also enjoy teaching visitors how to write Chinese characters and how to make beautiful origami paper lotus flowers, a symbol of purity in the Chinese culture.

This year, the Falun Gong booth was busy every day with crowds of people learning the exercises and making lotus flowers. Some people even visited several times throughout the day. 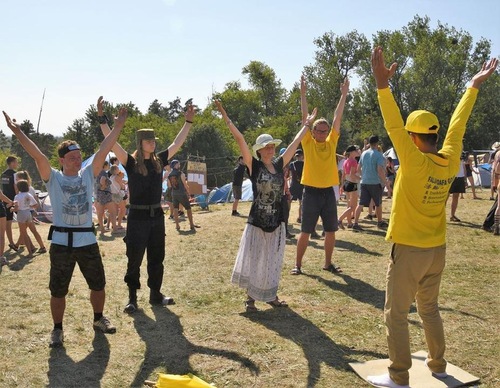 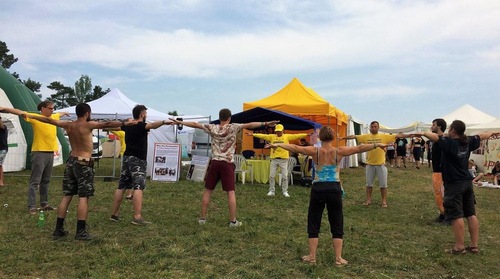 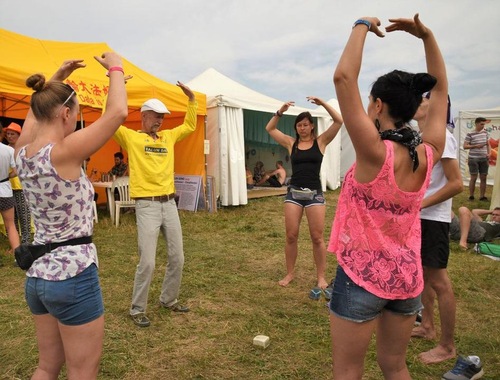 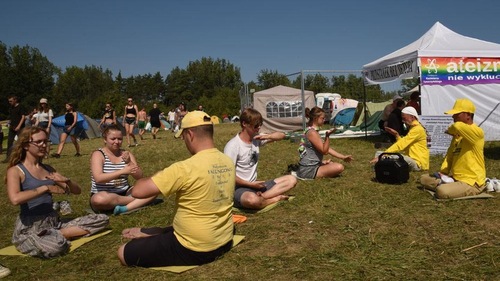 Crowds of visitors learning the exercises at the Falun Gong booth. 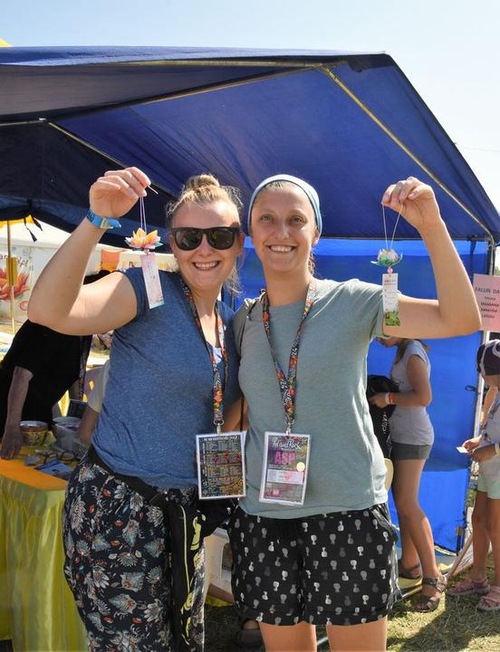 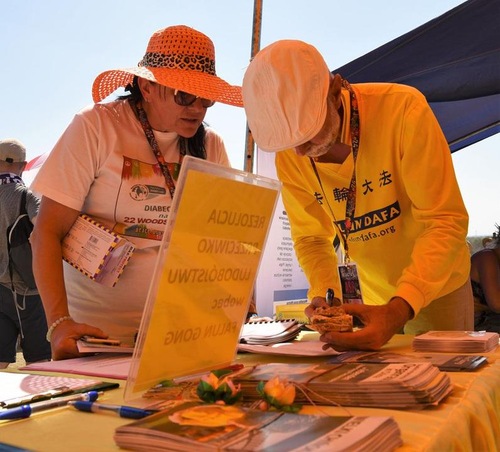 Barbara Kucharska said that her heart is full of joy when she hears the Falun Gong music. “This is the real Chinese culture. It's priceless. It expands one's heart and resolves conflicts. I respect it.”

Practitioners also collected signatures on an open letter calling upon the Polish Parliament to help stop the Chinese regime's state-sanctioned forced organ harvesting of prisoners of conscience, the majority of whom are persecuted Falun Gong practitioners.

Over a period of two days, more than 300 people signed the letter to express their support for Falun Gong. 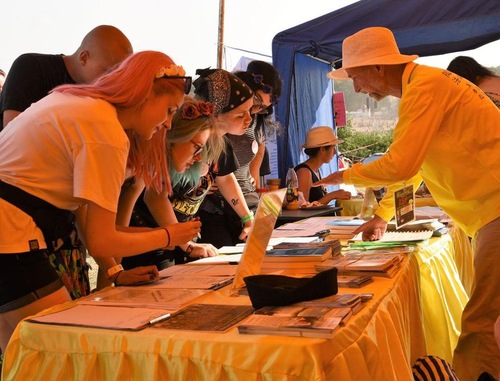 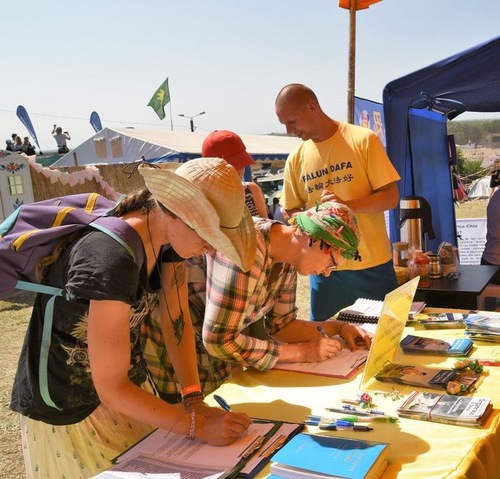 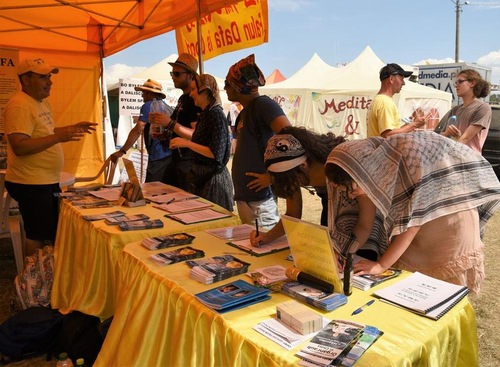 Many festival-goes signed the open letter asking the Polish Parliament to help stop the Chinese regime's forced organ harvesting of prisoners of conscience. 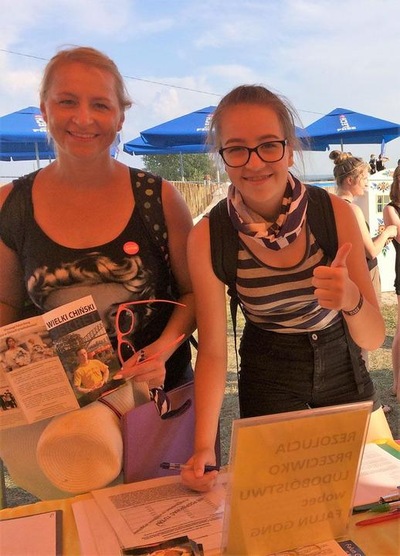 Pakulska (left) and her daughter signed the letter. Pakulska still remembers what the communist party's dictatorship was like in Poland. “I am sad that China is still under its' governing. Next time, I will vote for the lawmakers who support Falun Gong. Truthfulness-Compassion-Forbearance is a great principle,” she said.

This summer, practitioners in Hamburg held activities downtown every Saturday, demonstrating the exercises and raising awareness about the persecution. 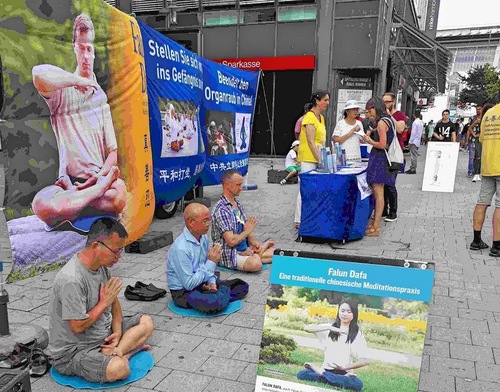 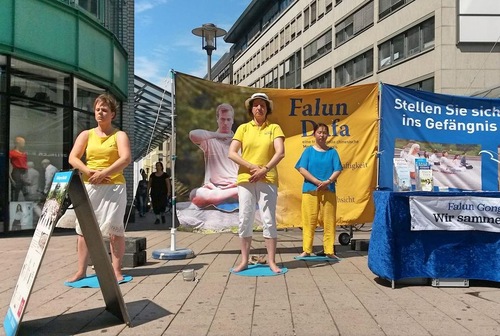 Practitioners' display boards reveal the brutality of the persecution in China. 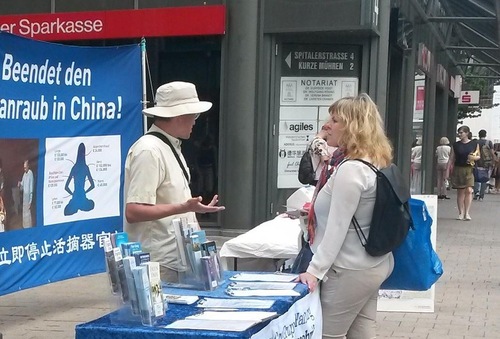 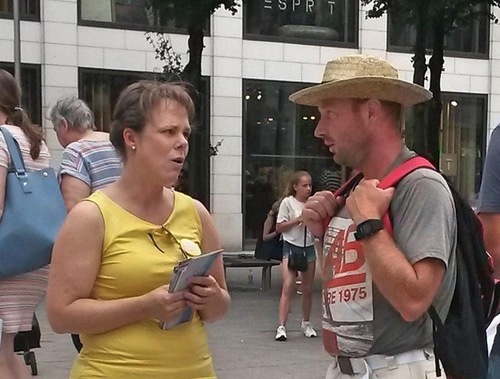 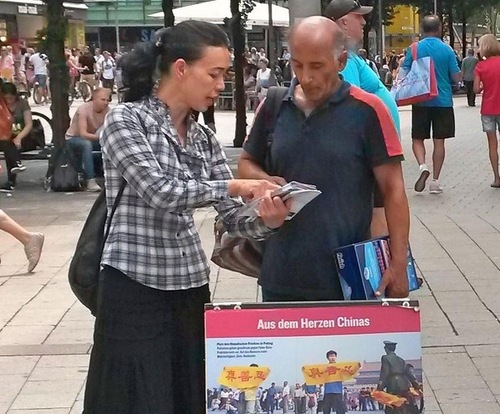 Talking to people about the persecution.

Many people stopped and signed the petition calling for an end to the persecution.

An older woman expressed strong support for practitioners' peaceful resistance. She said, “It's great that you have been trying to tell everybody about the forced organ harvesting. This is a terrible crime against human rights. I wish you much success.”

Another woman planned to take some flyers to her Chinese friends. “I like China, but unfortunately not everything from China is good,” she said. “The persecution of Falun Gong is horrible. I hope my Chinese friends can learn something from these flyers.”

The Plaza of Liberty and Human Rights in front of the Eiffel Tower has been a spot where local Falun Gong practitioners regularly demonstrate the exercises and raise awareness about the persecution in China. 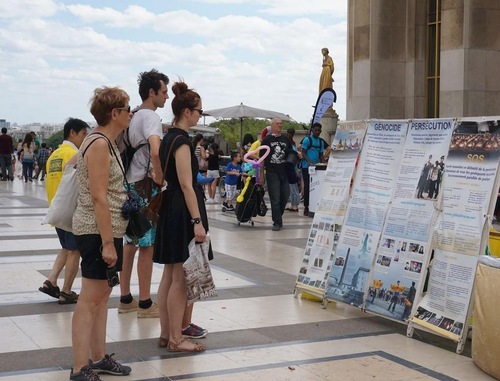 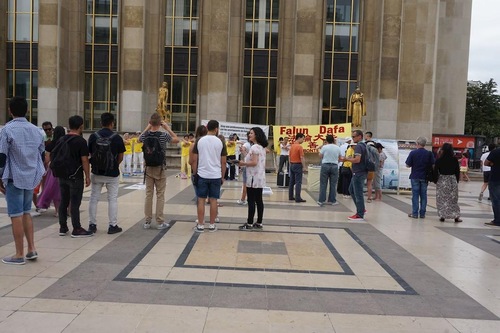 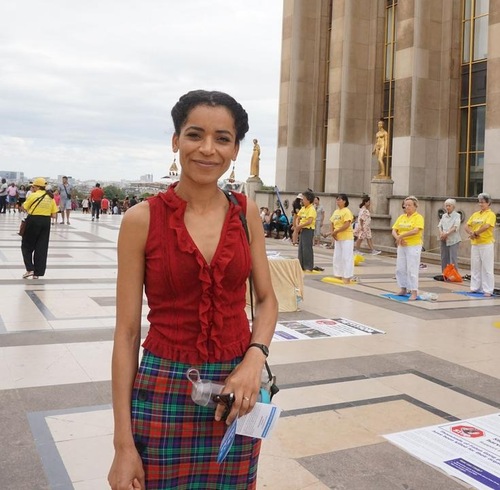 Barrani Zina encouraged practitioners in their efforts. “How can the Chinese government torture its own people with methods that should not even be applied to animals?” she said. “You are doing great. Please continue. Tell everybody about this and collect more signatures. Let people know what is happening in the world. Let's change the world together.” 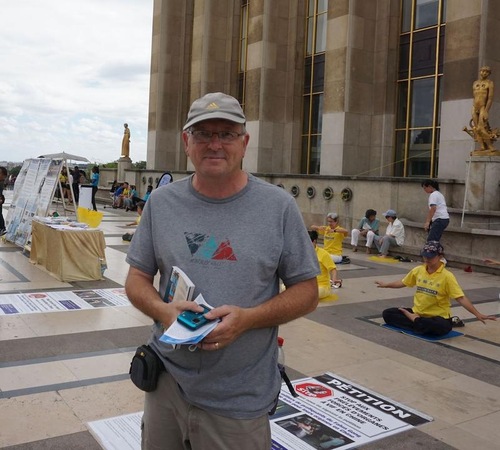 Benoit, a retired police officer, found Falun Gong to be very peaceful. He signed the petition and thanked practitioners for bringing the information of the persecution to the public. “I learned two things today,” he said. “The first is the unbelievably horrible persecution, and the second is the peacefulness of Falun Gong. It is terrible that people don't have the freedom to think in China.”

Just as practitioners in Paris are a regular presence at the Eiffel Tower, the British Museum in London is a spot where Falun Gong practitioners regularly go to introduce the practice and expose the persecution to the thousands of visitors there.

Many people this summer, especially tourists from mainland China, have talked to practitioners, learned about Falun Gong, and expressed their support. 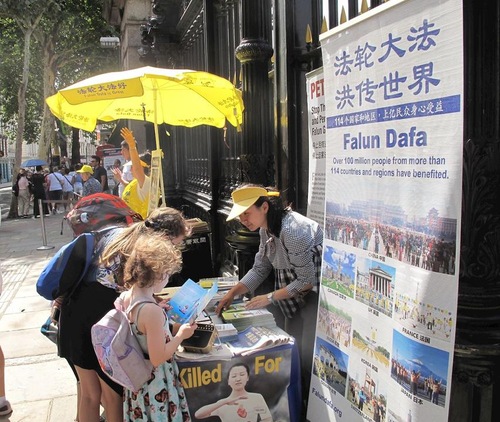 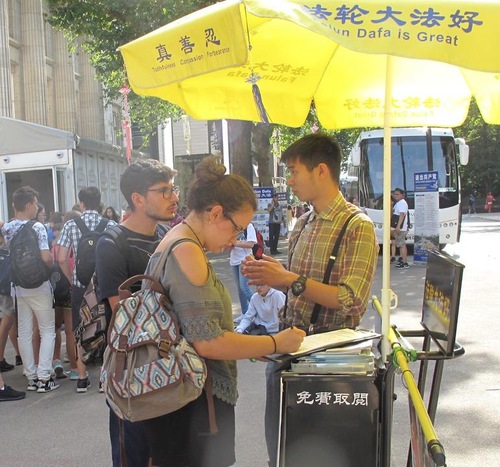 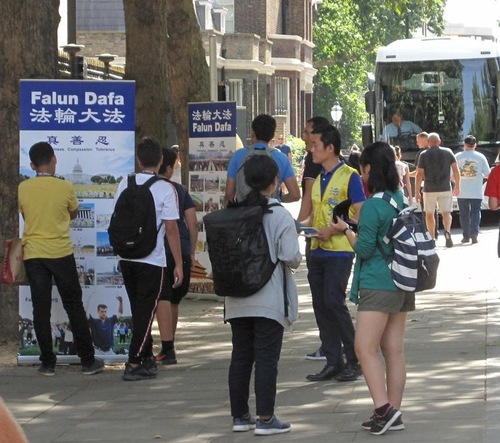 Practitioners' booth in front of the British Museum. 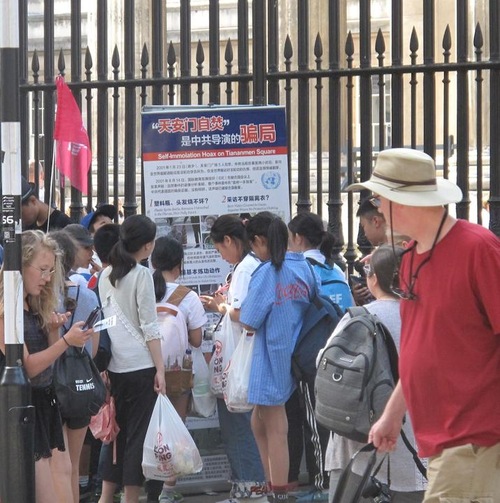 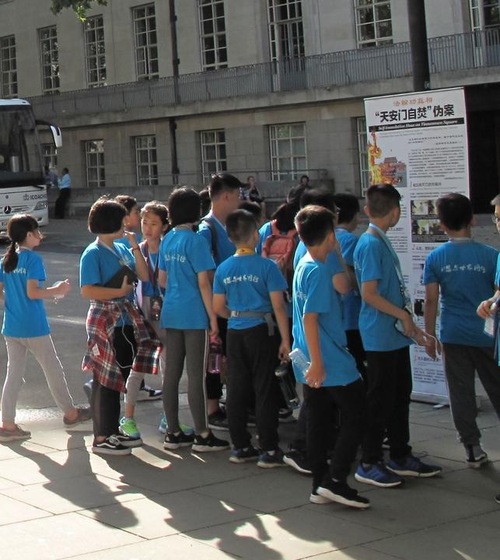 Practitioner Mr. Liu feels happy that more and more people from China are learning the truth about Falun Gong.

“Many of them were deceived by the Communist Party and had misunderstandings about Falun Gong,” Mr. Liu said. “But after talking to us, most of them changed their minds. Many of them also recognize the evil nature of the Party, and then quit the Party.

“Some of them took videos and asked for more of our informational materials,” Mr. Liu added. “They want to show these materials to friends and family back in China.”

“What I Know about The CCP's Monitoring of Mobile Phones”