(Minghui.org) It was in 2003 when Ms. Lin Huiyi, 33, started practicing Falun Gong to help her insomnia, depression, arrhythmia and autonomic nervous disorders. She had tried both Western and Chinese medicine, and even went to a variety of cardiologists, gynecologists and psychiatrists, but her condition had not improved.

At that time, Ms. Lin had been living with her husband and his family of nine for 11 years.

“My mother-in-law has to know whenever I leave the house or step out to run errands, and regardless of where I was, I have to quickly appear in front of her when she calls me. When I just got married, I was very tense and always asked my husband if my mother-in-law was calling me,” she said.

While she had to deal with her own stress and grievances, she also had to worry constantly about each and every family member, including her mother-in-law, her children, her brother-in-law and his family. 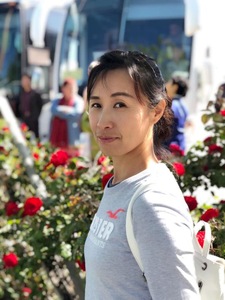 Ms. Lin's mother-in-law has a short temper and a dominating personality: everyone has to follow her orders and there is no room for negotiation.

“I have the lowest rank at home. Thus, I was tasked with much of the difficult work. For example, I have to go to the grocery store to buy food and daily necessities for the whole family and carry it home all by myself. When my mother-in-law starts swearing, I am the only one she singles out. I often felt unfairly treated. But because I had a strong personality and high expectations of myself, I refused to show any sign of being hurt to others.”

Ms. Lin gave birth to her elder daughter three years after being married. It was supposed to be a time for celebration, but her mother-in-law's micromanagement made things very stressful. For the sake of preserving harmony in the family, Ms. Lin could only swallow her complaints.

Things did not change after her younger daughter was born a year later. Ms. Lin would be scolded if she ever showed concern for her children.

The stressful home conditions made Ms. Lin's health deteriorate, first mentally with her depression and then physically with all her other symptoms. When it seemed she couldn't find any cure for her illnesses, the parent of her daughter's classmate introduced the book Zhuan Falun to her in 2004.

“At that time, there were many problems with my body but no one could find the cause of it,” Ms. Lin said. “The worst was my insomnia. I was clearly tired but my brain was wide awake and I couldn't sleep. No doctor could cure it. However, I was surprised to fall asleep easily only three or four days after I read Zhuan Falun!”

“After getting that good night's rest, I wanted to know more and read the book. Later, I read in the book that Falun Dafa is a practice that cultivates both mind and body, and it requires exercises. So I brought an exercise instruction video home to learn.”

“I was intrigued when I saw Master with curly blue hair on the television. Master looked very solemn and sacred in a yellow monastic robe. At that time, I thought it was a wig and wondered why his hair was blue. Just as I was feeling puzzled, the screen suddenly disappeared. It was later when I interacted with fellow practitioners that I learned what I saw that day was Master's law body.”

The Falun Dafa exercises, while are easy to learn, can greatly improve one's health.

Ms. Lin could still recall the first time she did the second exercise:

“When I was practicing the second exercise, I sweated profusely as I had to stand there and couldn't move. I couldn't stop sweating even when the fan was switched on. I'm not exaggerating. Once I finished practicing, all the channels in my body had been stretched out. It was as though my entire body was re-arranged. I knew that Master was cleansing my body.” 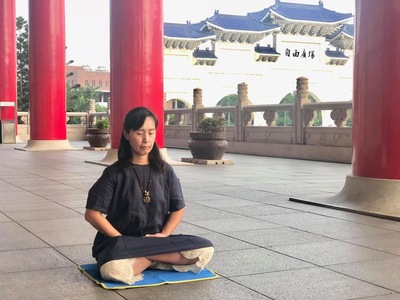 Photo of Ms. Lin doing the fifth exercises at the Chiang Kai-shek Memorial Hall in Taipei. 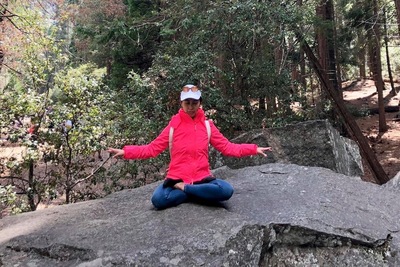 Ms. Lin felt like she had walked into a pure land when she started reading the book. Her illnesses and strong emotions towards her mother-in-law gradually disappeared as she started to follow the principles of Truthfulness-Compassion-Forbearance in her daily life.

From Falun Dafa's principles, Huiyi understood that all relations between people are caused by karma and that the mistreatment from her mother-in-law was repaying a karmic debt from a previous life. As she read the Fa and cultivated her mind, she realized that now she could look at the essence of the problems and truly look at things from the other party's point of view. Her relationship with her mother-in-law turned warm and harmonious.

Ms. Lin said, “There is a paragraph in Zhuan Falun that says 'you should always maintain a compassionate heart and a calm mind. If you suddenly bump into a problem, you will be able to take care of it properly.' (Zhuan Falun)

I memorized this principle and treated myself as a cultivator. Whenever a conflict arose, I would be able to look at things from my mother-in-law's perspective.”

In the past, Ms. Lin would easily break down and feel wronged by her mother-in-law's stern attitude and insensitive words, but now, she could look within and control her negative emotions when conflict arises.

“Three years ago, my mother-in-law had a stroke and couldn't speak,” Ms. Lin said. “As she was afraid of losing face, she didn't dare to tell us about her health condition. At that time, I let go of all misunderstandings I had and hugged her sincerely, and told her, 'We are at your side, don't be afraid.' She cried when she heard this and willingly went in for treatment.”

“At the end of June this year, she underwent surgery for breast cancer. We took care of her and often kept her company at the hospital. Though she sometimes had difficulties remembering things, and sometimes our conversations were not on the same page, she would smile innocently whenever she saw the words 'Falun Dafa is good' on my shirt.”

Having benefited personally, Ms. Lin wanted to tell others about the wonderfulness of Falun Dafa.

However, due to the censorship in China, information about Falun Gong could not be spread around. Hence, Ms. Lin blocked out some time and sought support from her husband and mother-in-law first before she traveled to tourist attractions in Taiwan to raise awareness of Falun Gong. She would go there on holidays to inform Chinese tourists about the persecution of Falun Gong in China and also about how the practice has spread to the world.

Once, Ms. Lin greeted three Chinese tourists who were smoking at the Sun Yat-sen Memorial Hall.

She said, “Hello. Welcome to Taiwan. Currently, Falun Gong is practiced in more than 100 countries and regions. When Jiang Zemin first persecuted Falun Gong, six out of seven members of the Politburo Standing Committee disagreed with his decision but he insisted on going it alone, killing many people who are trying to be kind. The world now knows that the Tiananmen Square self-immolation is a hoax.”

The tourists didn't dare to look at her and quickly walked towards their tour bus. Suddenly, the third tourist turned around and bowed to her.

“We know everything,” he said.

Ms. Lin quickly seized this opportunity and said, “Sir, let me give you an alias to quit the Chinese Communist Party (CCP).”

He smiled and agreed.

“As I watched them leave in their bus, I was very touched! That was the first person I had persuaded to quit the CCP,” she recalled.

Another time, Ms. Lin was talking to three elderly people at Taipei 101: “Do you recall the time when you held your fist and made an oath to heaven to sacrifice your life for the CCP? Because of this, you would be implicated when the Party is punished for its crimes. We are all kindhearted people. It is important to do the three withdrawals and save yourself.”

Ms. Lin noticed one man nodding his head vigorously while another woman agreed to quit. However, the third woman kept quiet.

She refused to give up and continued to tell them about the evil deeds done by the CCP and the importance of quitting the party.

Ms. Lin recalled,“Later, when I was preparing to go over to the other tourists, the man quickly tapped on the woman's shoulder and said, 'Let's quit!' It was at that moment that I realized they were a couple. The woman nodded at her husband's suggestion and I quickly gave them an alias.”

“The man borrowed my pen to write his and his wife's names on the blank space of my Falun Gong materials. When I carefully folded the paper and put it in my pocket, I looked at the woman and noticed her smiling brightly!”

“I realized that as long as I am being kind to others from the bottom of my heart, my words will move them,” she said.

Ms. Lin also recounted a moment that left a deep impression on her.

“There was once when I met a young man who passed by Taipei 101 on a bike. I told him that the information written on the boards could not be seen in China and he can use his cell phone to take a photo and send it to his family and friends.

“He replied kindly, 'I know everything.' When I asked him if he had done the three withdrawals, he shook his head and I said, 'Let's use the name 'Zi Hao' to quit.'” Upon hearing this, his eyes turned wide open and his jaw dropped. He said, 'That's my real name!' When I heard this, I was so excited.”

Ms. Lin has been telling people about Falun Gong at the tourist sites for five years and sometimes, her daughters would come and help hold her display boards for the tourists to see.

“I sincerely hope that those who have a predestined relationship with me will be able to know the wonderfulness of Dafa and know that the CCP hasn't stopped persecuting good people since this persecution began. I do not receive any money or fame for using my spare time to be at these tourist sites. I have no other intention other than to let the Chinese people understand Falun Gong,” she added.

“Declaration of Withdrawal from the CCP by Police Officer”