(Minghui.org) Falun Gong practitioners gathered at the National Chung Hsing University in Taichung on June 24, 2018. The attendees represented all walks of life and educational backgrounds, and many had traveled far distances. They talked about how they clarify the truth over the Internet and how to more effectively awaken people. 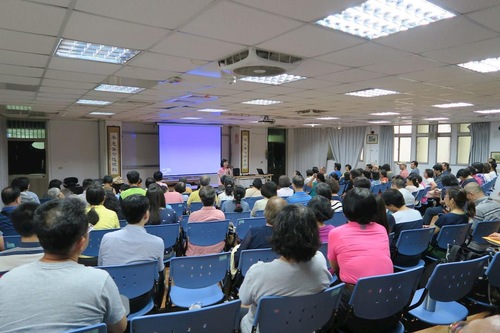 The conference was held at the National Chung Hsing University

The practitioners discussed how to make better use of their time and how to be more diligent. They also talked about the difficulties they'd overcome in breaking through the Chinese Communist Party's (CCP) Internet blockade in order to let more Chinese people know about Falun Gong and to help them withdraw from the Party.

Eliminating the Attachment to Comfort

Ms. Chen from southern Taiwan has talked to Chinese people over the Internet for several years. She talked about how she eliminated her attachment to comfort by increasing the length of time she studied the teachings of Falun Dafa. As a result, she could feel her cultivation level improve and she became more effective when she talked to people.

Ms. Chen said that she became alarmed recently when she noticed her vision becoming blurry. After she examined herself she felt that perhaps it was time for a breakthrough in her cultivation. However, no matter how she tried, she could not read her usual two lectures in Zhuan Falun each day. She looked inside and found that she actually wasted lots of time every day. She explained, “I knew that it was the attachment to comfort. If I manage my time better I have plenty of time to study the Fa.” So she wrote down a schedule and was finally able to make progress. Now, she's able to study three lectures every day and sometimes she reads Master Li's other lectures.

Afterward, she noticed that she was better able to handle any interference. When she encounters anything upsetting, she no longer rushes to assign blame. Instead, she looks inside first. She also discovered that the people who she had talked to about Falun Dafa and understood the truth were talking to others about it.

Experiences of Memorizing the Fa

Ms. Zeng is from southern Taiwan. She talked about how she's improved in her cultivation and Fa-study by memorizing it. Ms. Zeng said she used to become drowsy when she read, so she started to recite the Fa. She has now recited Zhuan Falun twice. She recites the Fa even when she's walking or driving. When she felt it was hard to continue she refused to stop. When it became difficult to memorize an entire paragraph, she switched to memorizing one sentence at a time. She said, “I told myself that I must not quit! When I overcame a block, I could feel the difference and I could again recite the Fa so quickly, that I felt reluctant to stop.”

Mr. Huang is from Hsinchu. He also talked about how he memorized the Fa. He explained that “My time is very tight.” So he began memorizing the Fa when he had only 20 to 30 minutes available. He said that he memorizes one paragraph at a time by using his cell phone. He keeps repeating each paragraph until he finally memorizes it.

Mrs. Qiu, a senior practitioner from Changhua, said that she has recited Zhuan Falun 20 times since 2005.

The Urgency of Reaching Out to Chinese People and Awakening Them

Ms. Shen traveled from central Taiwan to attend the conference. She said that her education level is low and that she only attended elementary school. She said, “It is difficult to memorize the Fa, however, I feel that the more I memorize the more I want to do it.” She mentioned that she knows how urgent it is to awaken people and so she learned how to use a computer. Now, she uses the Internet to clarify the truth, even though she's slow. All she knows how to do is to copy paste and type very simple characters. She's still managed to persuade many people to quit the CCP. She's persisted even when the Internet was severely blocked in China.

Ms. Yu, who also clarifies the facts over the Internet, said, "I dare not relax one day in talking to people because they are waiting to hear the truth about Falun Gong.” After she read the recently published books The Ultimate Goal of Communism and The Spectre of Evil Is Ruling This World, she said that she better understood how evil the Party is and how it has poisoned people. Afterward, her tolerance and compassion expanded even when the people she talked to on the Internet criticized her.

Ms. Yu contacted a man who is a senior CCP member who wanted to quit the Party. However, he was even concerned about using an alias. He said, “I'm worried that my bank accounts and investments will be frozen. What if I wait to transfer my assets, and then quit the Party? Because of my position it's not easy for me.”

Ms. Yu said that after she patiently explained how urgent it is to quit, he finally agreed. He expressed his gratitude and said, “I have a huge feeling of relief!” He asked Ms. Yu why she went to so much trouble, “Why do you care about me? Why not just let me continue to slide down?” The man felt that she was truly good and was moved by her compassion.

He asked how he could begin to practice Falun Gong and said, “I'm eager to learn.” He accepted a link to the exercise music and materials about studying the Falun Gong teachings.

Most practitioners said they benefited a lot from attending the conference. By listening to the other practitioners' cultivation experiences, they were able to see where they needed to improve in their own cultivation. Many said that they felt encouraged to cultivate more diligently.

“Practitioner Recounts Forgiving Those Who Mistreated Her”