(Minghui.org) In July 1999, the communist regime banned Falun Gong, making 100 million Chinese people a target of persecution for their belief in Truthfulness-Compassion-Forbearance. Nineteen years later, the suppression has not stopped, and practitioners around the world continue their efforts to end this massive tragedy.

At events all across North America, practitioners performed the peaceful exercises, marched in parades, and held up banners and posters calling for an end to the brutality. 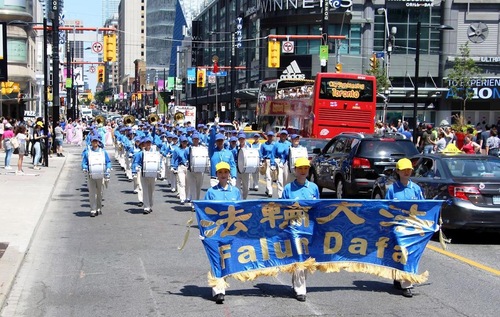 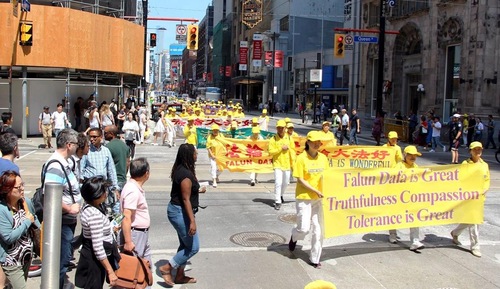 March in Toronto by Falun Gong practitioners on July 20, 2018.

The march in Toronto started from City Hall Square at noon on July 20 and went through business district. Many pedestrians took photos and many were surprised to learn that such a peaceful group was being severely suppressed in China.

Carlo, a software developer, watched the entire march. He said, “I read the Epoch Times newspaper a lot and I often see practitioners in the city. That is how I learned about what is going on in China. I admire them for their perseverance in the principles of Truthfulness-Compassion-Forbearance. I will pray for them.”

Micheline is a retired nurse and she came to visit the city hall with two friends from Italy. “More people need to know what is happening in China. Nineteen years is too long and I hope it will stop soon,” she said with tears in her eyes. 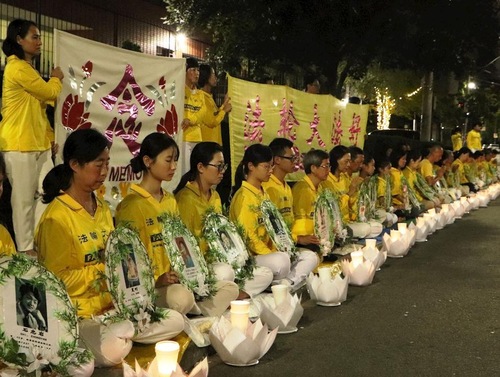 Candlelight vigil in the evening.

The march was followed by a rally and candlelight vigil. Consiglio Di Nino, former Canadian senator, attended the event. He said in his speech that the principles of Falun Gong helps society in many ways. “I have supported Falun Gong for over 20 years and I will continue to do so. Right now, more and more people have joined Friends of Falun Gong,” he said.

With posters and banners, Falun Gong practitioners gathered at George Street near ByWard Market on July 21 to tell passersby about the brutality in China. Despite the temperature of about 90°F, many people stopped for more information. 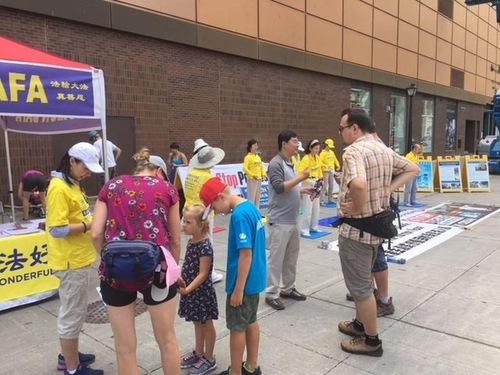 Pedestrians learn about Falun Gong in Ottawa on July 21, 2018.

Anne Paquette is a healthcare professional and owns a cleaning business. She had not heard about Falun Gong and was impressed, saying, “This is very good for us, especially young people, because it helps to find our inner peace and gain energy.” Appalled by the communist regime's organ harvesting from living practitioners in China, she signed a petition calling for efforts to stop it.

Anne came back 10 minutes later with bottles of water for all of the practitioners participating in the demonstration.

Hayley and her boyfriend also signed petitions. “The principles of Truthfulness-Compassion-Forbearance are beautiful. I will tell others about it,” said Hayley.

During a gathering in front of the Chinese Consulate on July 21 in Montreal, practitioners talked to passersby about the mistreatment practitioners suffered in China for their belief.

Less than one year after Mr. Zhou began to practice Falun Gong, the communist party banned the group in July 1999. “Both my wife and I were arrested in 2001 and I was sent to a labor camp with a term of three years. My mother was also arrested in 2009 and was detained in a labor camp for two years. My wife was arrested late last year,” he explained. 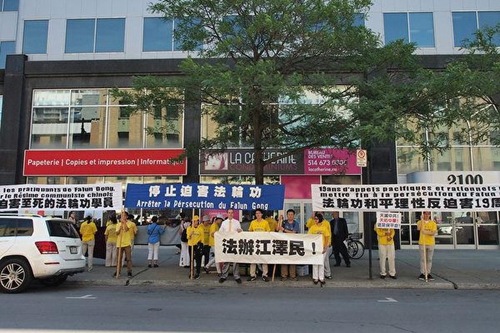 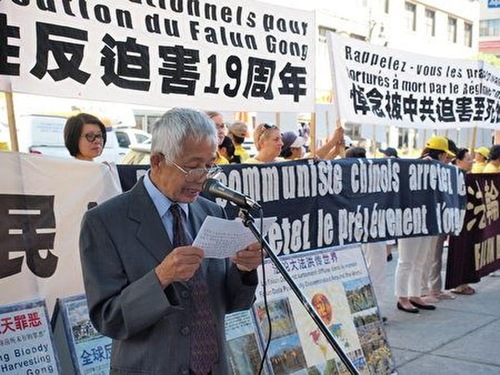 Li Zhenwen from Cambodia talked about the atrocities of the communist party in his rally speech.

Li Zhenwen, 80, comes from Cambodia and he is familiar with the communist regime's brutality. He said in his speech at the rally, “The massacre of Khmer Rouge was totally caused by the Chinese Communist Party (CCP), including military weapons, money and other things.” He thanked practitioners for their persistent efforts and said that they represent the future of China.

During the candlelight vigil at Chinese Consulate in Chicago on July 21, Falun Gong practitioners commemorated those who lost their lives in the brutal suppression. According to Minghui, at least 4,200 practitioners are confirmed to have died due to torture during police custody. 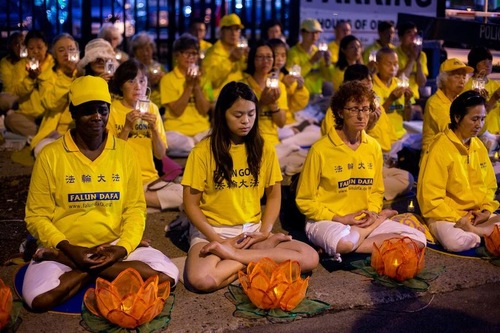 Candlelight vigil in front of the Chinese Consulate in Chicago on July 21, 2018.

John Lynch, a passerby who took photos of the event with his phone, said the atrocity was too severe. “This is a very peaceful rally. I will find out more about Falun Gong. The principles of Truthfulness-Compassion-Forbearance are something that apply to everyone,” he said.

Next to the group exercises on July 20 near San Francisco City Hall, practitioners laid out banners and posters that illustrated the tortures detained practitioners have suffered. 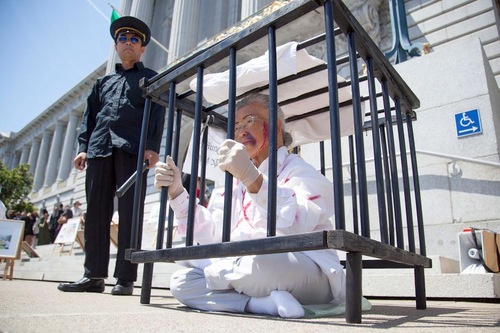 “Compared to what actually happened in detention centers, labor camps, and prisons, the torture methods described here are just the tip of the iceberg,” said Wu Junxiang, organizer of the event.

Ms. Long Shan, who came to the United States in 2015, said she had been detained in both 2014 and 2015. “After I was detained for the first time, my mother was not able to get any news about my whereabouts and she was under extreme mental and physical stress,” she said. “The communist party has been covering up the atrocity all these years. As a result, many people are not aware how widespread and severe the persecution is China.” 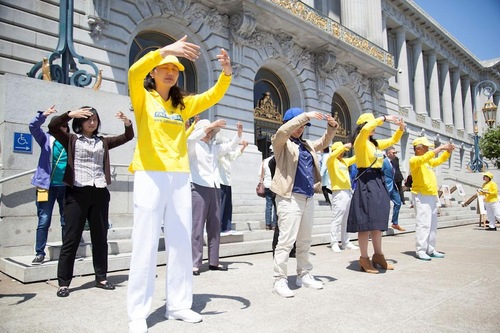 Group exercises during the rally.

Retired teacher Richard Goodwin said he had heard about this several years ago. “The slave labor, in conjunction with forced labor, is indeed horrible,” he said, “but I believe the situation will change. The Soviet Union was strong and communism collapsed overnight. A similar thing could happen in China.”

About 6,000 miles from California, a delayed Independence Day Parade took place on July 21 in Saipan, the largest of the U.S. territory Northern Mariana Islands. Falun Gong practitioners joined the community for celebration. 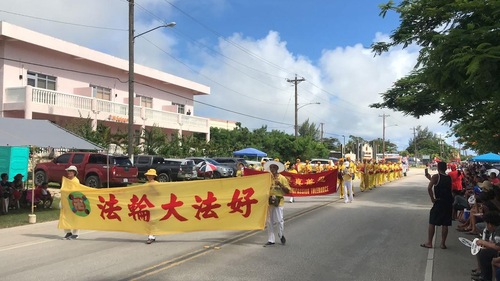 Falun Gong practitioners participated in the parade on July 21, 2018.

Following the banner of “The world needs Truthfulness-Compassion-Forbearance” was a lively team of waist drum players.

A tourist gave thumbs-up to a practitioner in the procession and said, “This is amazing. Keep it up!”