(Minghui.org) Because of my belief in Falun Dafa, I was imprisoned in Jiangxi Province Women's Prison, where I was tortured and forced to do manual labor. I also witnessed the cruel mistreatment of other Falun Gong practitioners.

Practitioners are not allowed to speak to or greet anyone; if they do, they are punished. Any Falun Gong practitioner being taken there for the first time is assigned two inmates to supervise her 24 hours a day. The most common punishments are being forced to stand for long periods of time and being closely monitored by prisoners all the time, even while eating, sleeping and using the restroom.

Most of the prisoners ordered to monitor Falun Gong practitioners are murderers, drug traffickers, and fraudsters. Directed by the guards, these prisoners are ruthless. They have their prison terms shortened by torturing practitioners and forcing them to renounce their belief.

Guards often brainwash these prisoners, saying they are “well-trained.” From time to time, the guards purchase food and daily necessities for the criminal inmates so that they will make more effort to abuse practitioners. If at any time they are not submissive to the guards, they are immediately replaced.

Straitjackets were used in all eight sections of the prison. Xiao Ye, a guard who specialized in persecuting Falun Gong practitioners, said they had enough straitjackets for disobedient prisoners. They connected clothes with pants, and the inner sides of the pants were connected, too, so that anyone wearing them could only move in little steps. Both criminal inmates and Falun Gong practitioners were forced to wear these confining suits.

Prisoners were handcuffed and hung up by the cuffs from morning until night, with their feet pointing to the ground but not able to actually touch or stand flat on the ground. They were released only at mealtime. A prisoner might also have her fingers bound with rope and hung up. Some prisoners died from the torture. 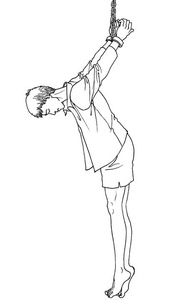 Illustration: Handcuffed and hung up

A prisoner could be ordered to squat and not allowed to stand up from morning until night.

A prisoner could be tied to a bed, not able to move, with their arms and legs tied to the four corners of the bed. Without access to the restroom, they would be forced to urinate and defecate in their pants on the bed. 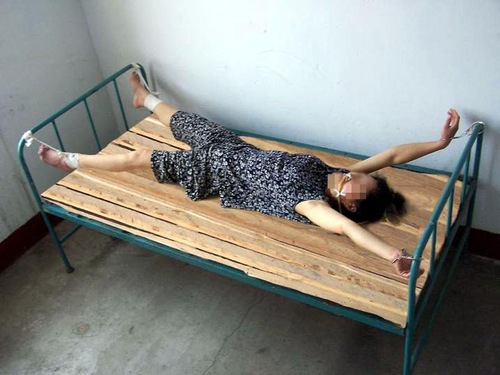 Torture Demonstration: Cuffed to a bed

Prisoners were given only rice or steam bread for their meals.

Prisoners could be forced to do labor the whole day, from 5:00 am to 10:00 pm. When they returned to their cells, they would stand until 2:00 am and were not allowed to sit.

The product of slave labor in Sub-Prison 6 was umbrellas. This work was the most tiring in the entire sub-prison and given only to Falun Gong practitioners.

Practitioners between the ages of 50 to over 70 bent their backs to push baskets of umbrellas (each basket was 80 to 90 pounds) to their work tables They then assembled the umbrellas one by one. Each basket had to be finished within 10 minutes. They had to stack boxes of packed umbrellas. The baskets were not equipped with wheels, so the work was very difficult.

There was one rule in the prison workshop: no one was allowed to help others; whoever helps others would be punished. From the years of umbrellas being pushed back and forth, the ground became soft and bumpy. Falun Gong practitioner Ms. Liu Xiaoci, who was over 70 years old, once fell on the uneven surface and couldn't get back up on her own. The guard refused to let anyone help her up.

“16 Arrested in Heilongjiang for Their Faith: 3 Sentenced, 9 Awaiting Trial”

“How Did I Become a Falun Dafa Practitioner?”