(Minghui.org) Today's news from China includes incidents of persecution that took place in 10 cities or counties in 7 provinces. According to this report, at least 14 Falun Gong practitioners were illegally arrested, at least 7 practitioners were detained or imprisoned, one practitioner was tried, another was sentenced to prison, and 4 practitioners' whereabouts are unknown. 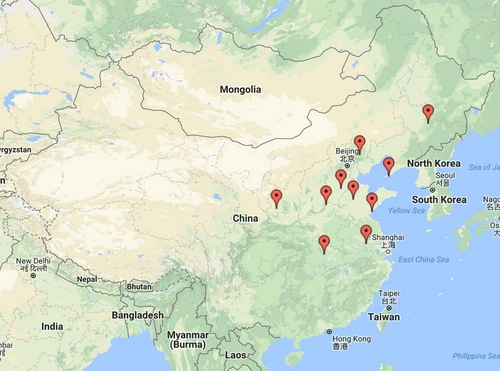 Mr. Xu Ancheng and his wife Ms. Ma Yufen were arrested at their home by officers from the Changyi Domestic Security Division and Yan'an Street Police Station on July 4, 2018. The officers ransacked their home and confiscated Falun Dafa books, a printer, computer, and paper currency bills with Falun Gong information printed on them.

Ms. Ma has since returned home, while Mr. Xu is being held in a detention center.

Ms. Cui was officially arrested after being detained for 37 days. Her case was turned over to the Ju Court by the Procuratorate, and she was tried on July 5.

Ms. Yu Lanying from Beishiwu Village in Duozhuang Town of the Zhangqiu District was arrested when she was updating her household registration in the Duozhuang Police Station on July 7, 2018. Her home was ransacked.

Mr. Li Yizhe, an associate professor at the Nanjing Broadcasting Institute, was recently sentenced to a 21-month prison term and fined 20,000 yuan.

Mr. Wang Rui has been held in the 3rd Ward, No. 2 Prison, Jidong Prison, for six months. No family visits have been allowed.

Ms. Chen Lan, Ms. Ma Lizhi, and Ms. Wu Xiuping from Wangqiansi Town, Jing County, were arrested by plainclothes officers on the morning of July 6, 2018, while they were talking to people about Falun Gong at the Wangqiansi Farmers' Market. Their whereabouts are unknown.

Ms. Guo Xiuping and Ms. Xiang Qin were reported to the authorities for talking to people about Falun Gong on the morning of July 7, 2018. Both practitioners were arrested and are being held in the Linzhou Detention Center.

Ms. Wang Sumian, 69, from the Lushun Development Zone was arrested at the Development Zone Police Station on May 24, 2018, when she went to tell the officers there about Falun Gong. She was taken to the Yaojia Detention Center.

Mr. Zhang Feng, Ms. Li Lixia, and Ms. Qiang Weixiu from Zhenyuan County were arrested by officers from the Zhenyuan Police Department and Domestic Security Division on the evening of July 4, 2018, while they were studying the Falun Gong teachings at Ms. Qiang's home. Their homes were ransacked.

“Hebei Woman Given 3.5 Years for Spreading Information about Falun Gong”