(Minghui.org) Today's news from China includes incidents of persecution that took place in 9 cities or counties in 7 provinces. According to this report, 5 Falun Gong practitioners were subjected to mistreatment during their detention, and at least 11 were illegally arrested. 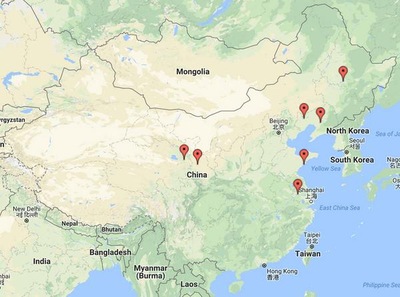 Mr. Yang Xuegui was sentenced to a five-year prison term by the Chengguan District Court, and Mr. Zhou Wei a four-year prison term. Officials extorted 2,000 yuan from the practitioners' families. They were denied family visits.

Mr. Gao Jun was sentenced to a nine-year prison term. The Liaoning City Intermediate Court upheld the original verdict. Mr. Gao was taken to the Shenyang Prison, which refused to accept him for health reasons. He was taken back to the Liaoyang County Detention Center.

Mr. Gao's sister visited him on July 6, 2018. Mr. Gao was emaciated, stated that he felt numbness in his legs, and could not raise his arms over his head.

Mr. Gao Fuzhi from Bayan County was arrested by officers from the Xinghua Police Station, Bayan County, on November 9, 2017. He was taken to the Bayan County Detention Center. It was learned that the Bayan Court had notified Mr. Gao that he would be tried on July 12, 2018.

Mr. Wang Guohui and his wife Ms. Yu Chunli were arrested by officers from the Chengyang District 610 Office, the Domestic Security Division, and the Jihongtan Police Station on July 9, 2018.

Ms. Li, Ms. Dai, Ms. Di, Ms. Li, from the Nongmutixiangyuan Residential Community, Biological Park, Chengbei District, and other practitioners were arrested by the Xining City Domestic Security Division, the Chengbei District Police Department, and the Biological Park Police Station for studying the Falun Gong teachings at Ms. Li's home on the afternoon of June 21, 2018. Their homes were ransacked.

Ms. Jin Di was arrested for distributing Falun Gong materials on the evening of July 7, 2018.

Ms. Liu was released on bail after failing the physical exam. Ms. Yang and Ms. Lin were taken to the Chaoyang City Detention Center.

Mr. Pan Yingshun and Ms. Zhai Suping from Qinglong County, Qinhuangdao City were tried by the Changli Court on July 5, 2018. The judge said to Mr. Pan’s children that he could be sentenced heavily if they hired a lawyer from Beijing. Due to the pressure, Mr. Pan’s family dismissed the Beijing lawyer.

Ms. Li Lianrong was tried by the Nongken Court in Jiansanjiang on May 17, 2018. The prosecutor had nothing to say after listening to the lawyer’s argument. The judge also had no objection to the lawyer’s legal comments. However, the court still announced that Ms. Li was sentenced to three years of imprisonment at the end of June 2018

“My Wife and I Are Thankful for Falun Dafa”