(Minghui.org) Falun Gong practitioners from the greater New York area gathered in Manhattan this week to commemorate their fellow practitioners who died in the 19 years of persecution of the practice in China. The Chinese communist regime launched the persecution of Falun Gong (also called Falun Dafa), a mind and body practice guided by the principle of Truthfulness, Compassion, and Forbearance, 19 years ago on July 20, 1999. Practitioners held a rally and candlelight vigil on July 16, 2018 at the Chinese Embassy to mourn those who lost their lives and to call for an immediate end to the atrocities still taking place in China. 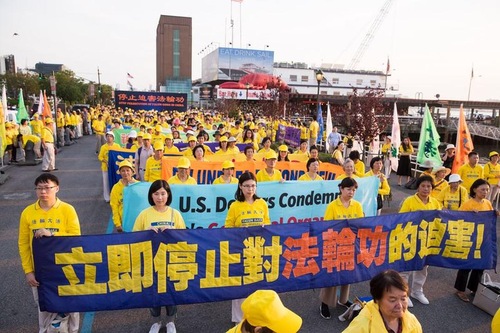 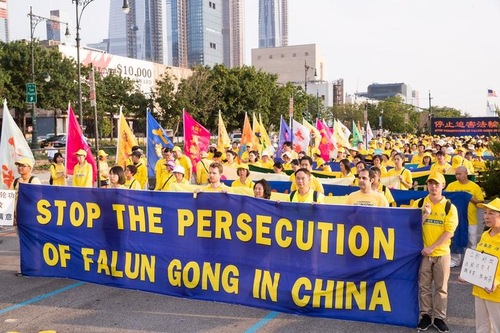 Falun Gong practitioners from the greater New York area hold a rally at the Chinese Embassy in Manhattan on July 16, 2018, to protest 19 years of brutal persecution of the practice in China.

Later that evening, a candlelight vigil was held to commemorate Falun Gong practitioners who died in China for refusing to give up their faith. 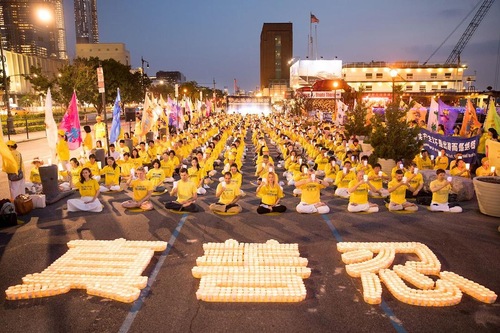 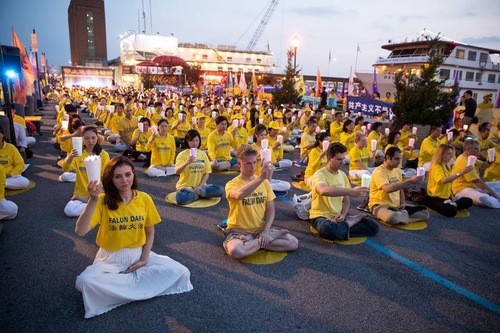 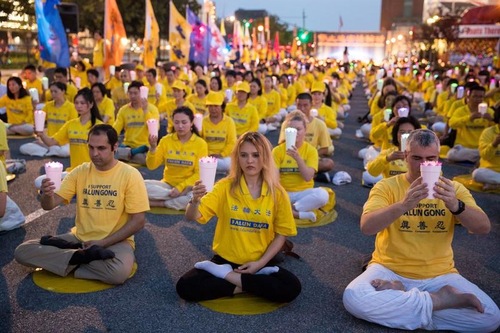 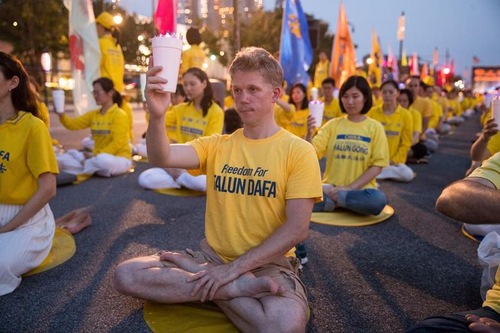 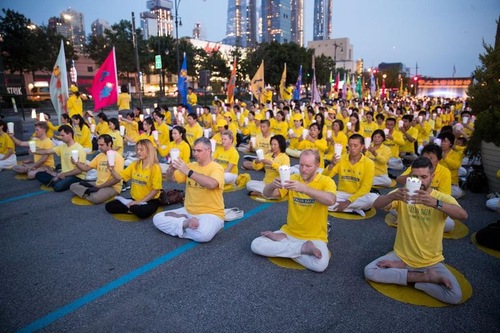 Persecution Is a Catastrophe that Destroys Humanity

A number of speakers addressed the rally. Dr. Zhang Erping, spokesperson for the Falun Dafa Information Center, pointed out that Jiang started the persecution in 1999 out of jealousy because Falun Gong practitioners outnumbered the membership of the Chinese Communist Party (CCP). 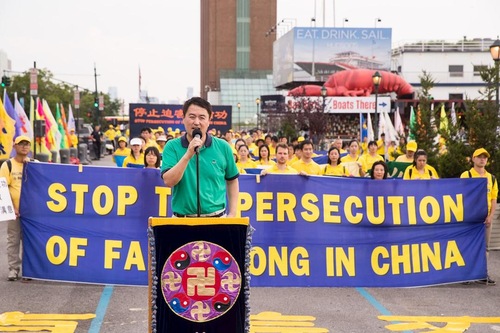 “For 19 years numerous practitioners were incarcerated and tortured. Over 4,000 died as a result and many had their organs harvested while they were still alive for organ transplants. The persecution has destroyed human nature and universal values and is an unprecedented catastrophe. I wish to raise awareness of the persecution so that more people can help stop it,” said Dr. Zhang.

Trend of Quitting the CCP Paves Road to a New China

Ms. Yi Rong from the Global Service Center for Quitting the CCP said that even in the face of relentless persecution, “The Falun Gong practitioners upheld their belief and tirelessly helped people to quit the CCP and its affiliated organizations. So far, over 309 million Chinese people have quit. At the same time, Falun Gong has grown and is practiced on all continents by people of different races and nations.” Ms. Yi added that besides the importance of individuals breaking free from the Chinese Communist Party, so many people quitting the Party “will provide a peaceful transition to a new China without the CCP.” 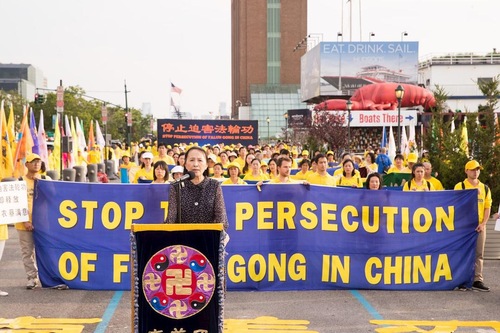 Ms. Yi Rong from the Global Service Center for Quitting the CCP speaks at the rally.

Perpetrators of the Persecution Face Most Severe Punishment

Dr. Wang Zhiyuan from the World Organization to Investigate the Persecution of Falun Gong said that all crimes committed during the persecution have been documented, and the organization has been tracking the officials who have participated in the persecution. “Those who persecute Falun Gong are committing crimes of genocide and crimes against humanity, and the perpetrators will face the most severe trials in history,” said Dr. Wang.

Only Truth and Justice Will Bring Light and Hope

Freelance writer Mr. Zhang Lin witnessed how steadfast and brave the practitioners were in upholding their belief when he was incarcerated with them in a forced labor camp in Guangzhou for his involvement in the pro-democracy movement. He has been a supporter of Falun Gong ever since. 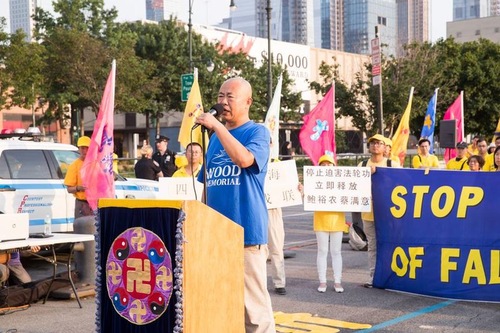 Mr. Zhang said, “Falun Gong practitioners deliver an important message to the world. At any time, a man must uphold truth and justice and not bow to tyranny. Only then will there be light and hope for mankind.”

Calling for the Rescue of Father from Persecution

Ms. Zhang Hongyu’s whole family practiced Falun Gong, but the persecution has rendered her family broken. Her mother died at the age of 51 after being tortured for three months for refusing to renounce her belief. The Chinese police recently arrested her father. Ms. Zhang has been asking the US Congress for help in rescuing her father from prison in China. 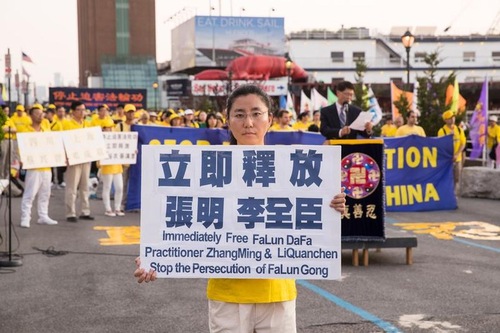 Ms. Zhang Hongyu, whose whole family are Falun Gong practitioners, calls for the rescue of her father imprisoned in China.

Being Steadfast Amidst the Tortures

Mr. Liu Xitong, a calligrapher from Qingdao who has been detained over 30 times and suffered over 100 types of tortures, spoke of his experience of nearly dying in detention. Prison guards brushed hot pepper juice on his genitals, pricked his nails with needles, burnt him with cigarettes and lighters, wiped his eyes with menthol oil, tied him down then hung him up in excruciating positions causing damage to his ligaments. His horrifying experiences moved everyone at the rally.

Dr. Li Tianxiao, senior Political Analyst with a Ph.D. in Political Science from Columbia University, talked about the spiritual importance of helping people quit the CCP. “It is to wake up the people,” he said. “The darkest day will be over and the moment of light will come. Justice will conquer evil and light will replace darkness.” 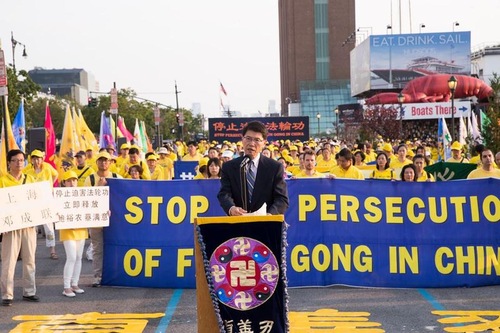 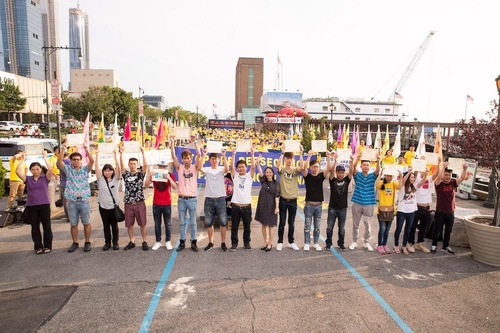 Seventeen Chinese people quit the CCP at the rally.

Seventeen Chinese people, after listening to the speeches at the rally and understanding the evilness of the persecution, chose to immediately quit the CCP and its affiliations. Several of them said that they fully supported the efforts to peacefully dissolve the CCP.