(Minghui.org) Today's news from China includes incidents of persecution that took place in 10 cities or counties in 7 provinces. According to this report, 18 were illegally arrested. 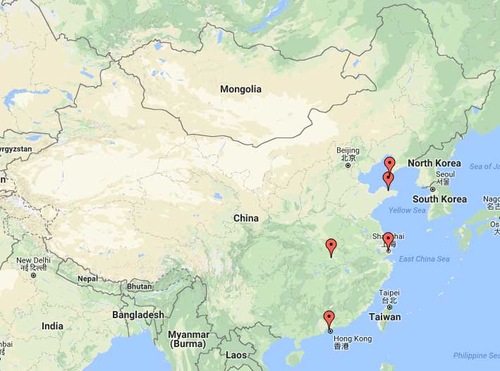 Ms. Liu Caifan, 72, from the Liangcheng Neighborhood in the Hongkou District was spotted on surveillance cameras in Liangcheng Park on February 8, 2018, helping people quit the Chinese Communist Party (CCP) and its affiliated organizations. She was arrested by Domestic Security officers and taken to the Liangcheng Police Station. Her home was ransacked.

Ms. Liu is being held in the Hongkou District Detention Center, and her family has not been allowed to see her. Ms. Liu's case was turned over to the Jing'an District Court.

Mr. Shi Chunlin from Xiaoguan Village, Guanli Town, Qixia City has been missing since the CCP launched the brutal persecution of Falun Gong in 1999. He was nearly 30 years old at the time.

Mr. Wang Riqing was reported to the authorities for distributing Falun Gong materials on April 14, 2018. He was arrested by three officers from the Wucaicheng Police Station in the Development Zone. The officers confiscated UBS flash drives and printed materials that he was carrying. The officers also ransacked his home and confiscated Falun Dafa books, calendars, and DVDs.

Mr. Wang was taken to the Dalian City Detention Center that night after undergoing a physical exam. He was officially arrested in May, and tried by the Development Zone Procuratorate on June 25.

Mr. Liu Lijun was arrested by officers from the Futian Police Department on October 7, 2017. He was taken to either the Nanshan District or Fetian District Detention Center.

Ms. Wang's lawyer received a notice weeks later, stating that his client's case had been returned to the Yanqing Procuratorate due to insufficient evidence. Her case was resubmitted to the Yanqing Court on March 20. Judge Li Shuang went to the Changping Detention Center the following day to notify Ms. Wang that she would face a second hearing.

Ms. Wang's lawyer learned that the prosecutor did not gather additional evidence and only wrote a so-called explanation of prosecution evidence.

The three women appeared in court again in May. Judge Li sentenced them a month later.

Mr. Chen Xianzhong, 72, was tried in the Nanming District Court on the afternoon of June 11, 2018, after being held in the Nanming Detention Center for more than a year. The trial lasted about three hours. No decision was made.

Mr. Chen’s family did not receive notification of the trial until June 9. Many of his relatives and friends had not heard about the trial due to the short notice. Mr. Chen was very weak during the trial. He tried to sit down three times, but was pulled up and made to stand by the court guards each time.

Ms. Suo Jiyan was tried in March 2018 and sentenced to a three-year prison term. She was taken to the Hunan Women’s Prison around mid June 2018.

Ms. Wang Guifang, Ms. Zhang Shujie, and Ms. Zhao Hong’e were sentenced in December 2017. They each appealed to the Dandong Intermediate Court, but the original verdicts were upheld.

The three practitioners were taken to the Shenyang Women’s Prison on June 19, 2018, after being detained for more than a year.

Ms. Wang Lei from the Fangshan District in Beijing was sentenced to an eight-year prison term by the Fangshan Court in 2015, and has been incarcerated in the Inner Mongolia Women’s Prison for four years. Her physical and mental state is deteriorating.

Ms. Wang's lawyer Mr. Li Zhongwei went to the prison and requested to visit her on the afternoon of June 28, 2018. The prison authorities refused his request with the excuse that Ms. Wang refused to give up her belief in Falun Gong. This is the fourth time the prison has refused to allow her lawyer to see his client.

Ms. Zhang Libin from Erguna City, Inner Mongolia was arrested on October 19, 2017, for talking to people about Falun Gong while she visited her daughter in Chaoyang City, Liaoning Province. She was taken to the Chaoyang Detention Center. Her health is deteriorating.

Ms. Zhang was tried by the Lingyuan Court, Xidayingzi, Chaoyang City on June 28, 2018. Her family hired a lawyer to defend her.