(Minghui.org) Today's news from China includes incidents of persecution that took place in 8 cities or counties in 3 provinces. According to this report, 7 Falun Gong practitioners were subjected to mistreatment during their detention, and at least 2 were illegally arrested. 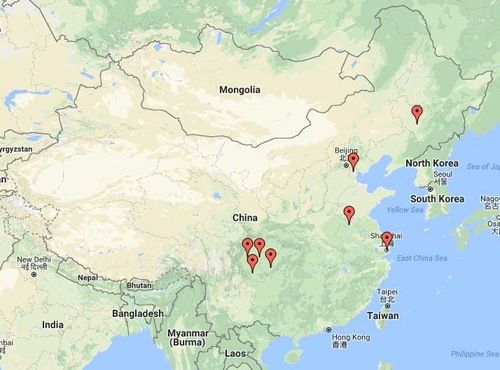 Ms. Yang Chunmei from Daqing City, Heilongjiang Province was arrested in Shanghai at the end of 2017. She has been detained for more than six months. No more details are known.

Ms. Zhang Mei'e was sentenced to three years in prison and fined 15,000 yuan by the Suixi County Court.

Mr. Du Shangwei from Suixi County is being held in the Xiao County Detention Center.

Mr. Liao Banggui, 69, was reported to the authorities for talking to people about the persecution of Falun Gong on a bus. He was arrested by officers from the Beigu Township Police Station on June 26, 2018.

Officers from the Suining Economic Development Zone Domestic Security Division then took him to the Yongxing Detention Center for 15 days of detention.

Mr. Wang Zhongming was sentenced to three-and-a-half years in prison by the Yubei District Court. He has appealed to the intermediate court.

Mr. Wang Dianhua was arrested by officers from the Jiutai District on the morning of July 3, 2018. His home was ransacked and his Falun Gong books were confiscated.

Ms. Zhou Yejun from the Cuiping District was arrested by officers from the Yibin City Domestic Security Division on August 12, 2016, for posting fliers with information about suing former Communist Party leader Jiang Zemin on August 11. Her home was ransacked.

Ms. Zhou was taken to the Yibin City Detention Center. The Cuiping District Court sentenced her to a year in prison and two years of probation on May 17, 2018.

Ms. Jiang Li was sentenced to a three-year prison term by the Gaoxin District Court.

“As People Learn about Falun Dafa, They Willingly Quit the Chinese Communist Party”