(Minghui.org) Falun Gong practitioners in Canada participated in the opening parade of the 106th Calgary Stampede on July 6, 2018. This ten-day annual rodeo, exhibition, and festival, held every July in Calgary, Alberta, Canada, attracts 100,000 tourists from all over the world every year. About 300,000 people watched the opening parade, which is the second largest in North America.

Falun Gong practitioners from Vancouver, Toronto, Ottawa, and San Francisco presented a spectacular procession in the parade with the Tian Guo Marching Band, a large float, and a waist-drum troupe. The performance received warm applause, thumbs-up, and heshi (pressing hands in front of the chest) from spectators. 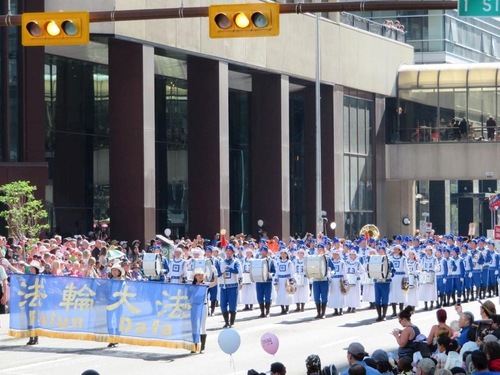 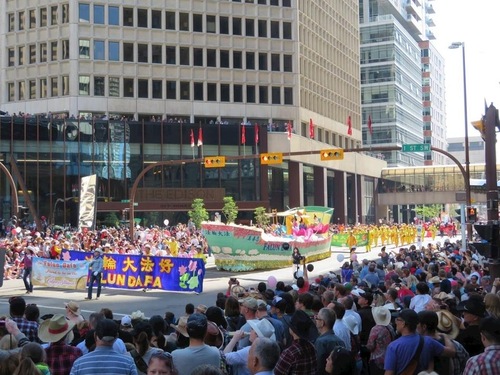 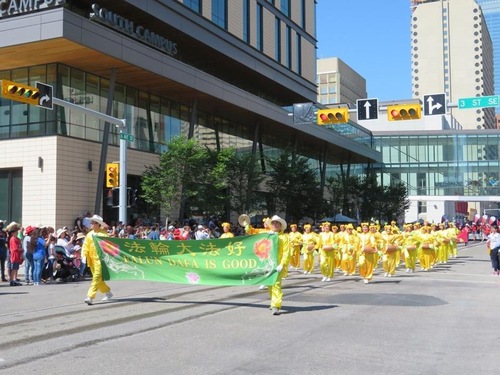 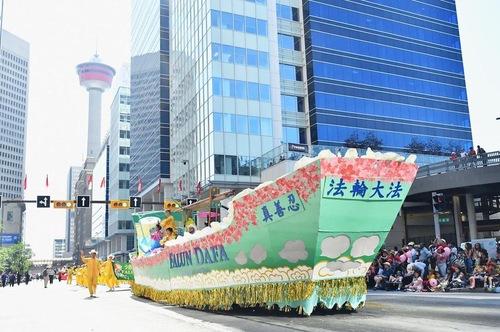 Falun Gong practitioners’ high spirits, bright colors. and beautiful music of compassion touched people's hearts. Many people said to the practitioners, “Thank you! You are great!” 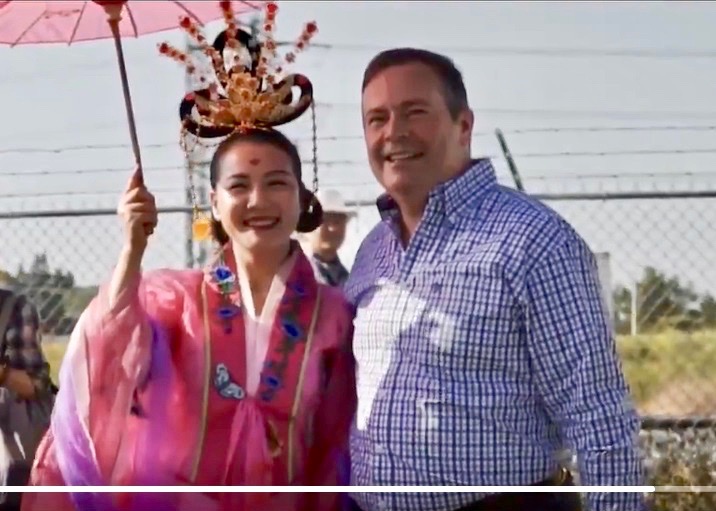 Jason Kenney, MLA PC, leader of the United Conservative Party in Alberta, visited the parade participants before it started. He shook hands with several of the Falun Gong group and called out, “Falun Dafa is good!”

The Tian Guo Marching Band also gave performance at a breakfast meeting in a park on the second day. Their powerful music received warm feedback from the audience.

During the TV broadcast by CBC, the host and hostess told the TV audience that the costumes of the Tian Guo Marching Band originated from the Tang Dynasty. They praised the beauty of the Falun Dafa procession, and announced, “Falun Dafa is also known as Falun Gong. It is practiced by millions of people around the world, and combines very gentle exercises with character improvement, leading to better health and spiritual enlightenment.”

Mr. Yang and his wife from Chongqing, China, watched the parade with their grandson. When Mr. Yang saw the magnificent Tian Guo Marching Band, tears came to his eyes. He said he had a warm feeling and was touched. He couldn't hide his excitement upon seeing the Falun Dafa float and the waist-drum dancers, and hearing their energetic drum beats. He took a photo of the words, “Falun Dafa,” and kept looking at the picture for a long time.

Several people who worked at the parade told practitioners that the marching band music was incredible. They wondered how these band members from different cities could play so well together with such a short preparation time. They thought it was a miracle. 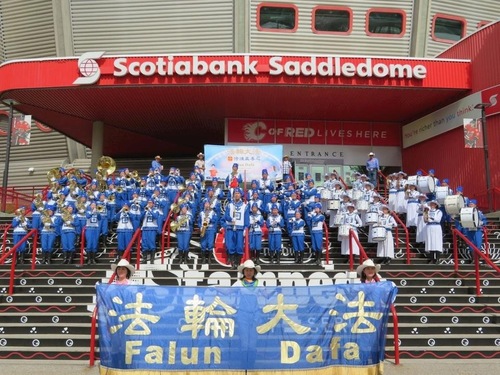 Tian Guo Marching Band performs at Scotiabank Saddledome on the first day of the Calgary Stampede. 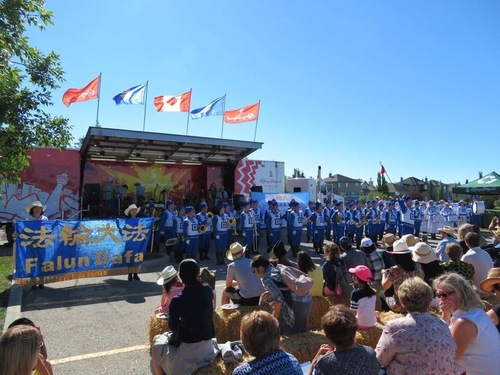 A hostess from Global News Radio was excited to see the performance of the Tian Guo Marching Band at Scotiabank Saddledome on the first day of the festival. She recorded several pieces of the band’s music. She told a Falun Gong practitioner that she was most impressed with the Tian Guo Marching Band among all the performing groups, and that she felt touched. The practitioner gave her a beautifully-made, crystal-like lotus flower, with an attached card which read, “Falun Dafa Is Good” and “Truthfulness Compassion Forbearance.” She said, “Today is my lucky day!”

After listening to the music by the Tian Guo Marching Band, a local resident named Terry stood up and waved at Falun Gong practitioners. He said, “Your music is marvelous! It sounds great!” He thanked practitioners repeatedly.

“[Minghui Fahui] My Cultivation Path As a Minghui Reporter”