(Minghui.org) Today's news from China includes incidents of persecution that took place in 7 cities or counties in 2 provinces. According to this report, 3 Falun Gong practitioners were subjected to mistreatment during their detention, and at least 5 were illegally arrested. 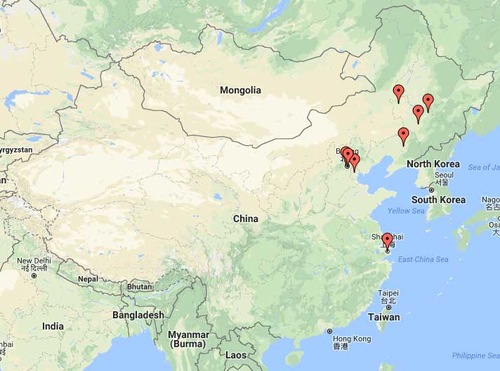 Mr. Zhao Yingdong from the Chaoyang District was arrested when he went through a checkpoint at the Beijing Train Station on June 27, 2018. His whereabouts are unknown.

Ms. Wu Kun was arrested at the Nenjiang Street Bus Station, Huanggu District, on the afternoon of May 30, 2018.

Mr. Su Yucai was arrested by officers who were staked outside his apartment building on the morning of June 23, 2018. The officers confiscated photos of the founder of Falun Gong, Falun Dafa books, and materials.

Mr. Su was taken to the Zhengyang Police Station and detained for five days. He has since returned home.

Mr. Zhang Ziwen from Junliangcheng Town, Dongli District, was taken to the No. 2 Sub-ward, No. 5 Ward, Binhai Prison. He suffered a heart attack on June 25, 2018, and was taken to the Xinsheng Hospital in Liyuantounan Prison, Liqizhuang Area, Xiqing District.

Three police officers broke into Ms. Li Hongyan's home and ransacked it on the evening of June 21, 2018. They confiscated photos of the founder of Falun Gong, Falun Dafa books, and materials.

Ms. Li was not home at the time. However, her husband was arrested and detained for five days. He was then taken to the No. 3 Detention Center by officers from the Jilin Street Police Station, Erdao District.

Ms. Yang Dandan, 22, from Dashigezhuang Village, Dasungezhuang Town, Shunyi District, was reported to the authorities for talking to people about Falun Gong on the afternoon of June 29, 2018. She was arrested by officers from the Nancai Police Station.

Ms. Yang is being held in the Nihe Detention Center, Shunyi District.

Mr. Deng Chenglian from the Minhang District was arrested by officers from the Hongqiao Police Station on March 23, 2018. He is being held in the Minhang Detention Center.

Mr. Deng went on hunger strike to protest the persecution. He is very weak, and been put on an intravenous drip. His lawyer has not been allowed to see him.

Ms. Zhang Chun was arrested at a checkpoint at the Taonan Railway Station on June 7, 2018. The officers found 1,700 yuan in paper bills with Falun Gong information printed on them.

Ms. Zhang is being held in the Baicheng City Detention Center.

“Recent Falun Gong Events in the U.S. and Europe”