(Minghui.org) The China Organ Harvest Research Center (COHRC) presented its most up-to-date research results at the 27th International Congress of The Transplantation Society in Madrid, Spain, which took place from June 30 to July 5. The researchers documented their findings in a new 341-page report titled “Transplant Abuse in China Continues Despite Claims of Reform.”

A number of national news outlets in Spain and international media have covered the organ harvesting issue upon the report’s release. The new report can be found on the COHRC website at ChinaOrganHarvest.org. 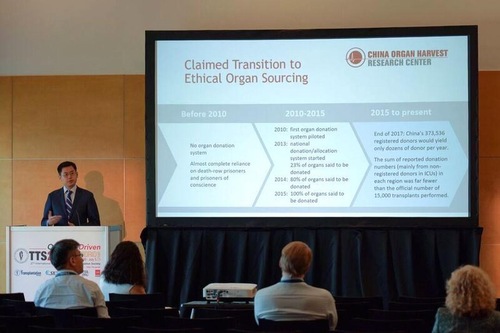 David Li, a co-author of the new report, presents his team's findings at the International Congress of The Transplantation Society on July 2.

The Chinese government asserted in 2015 that it had ceased extracting organs from executed death-row prisoners and transitioned completely to ethical organ sourcing. However, international observers have raised doubt that a process that took decades in other countries could be accomplished overnight.

The authors of the report collected data on new developments in the Chinese organ donation system after 2015, analyzed hundreds of transplant hospitals, government and industry statements, official policies and legislation, actual donation figures from various regions, the abuse of brain death criteria, and the broader operation of China’s donation and transplant system. The new report concludes:

Transplants outpace donations: The number of voluntary donations in China remains extremely low relative to the size of the transplant industry. At the end of 2017, the official count of registered donors was 373,536. If one applies the ratio of registered and actual donors in the United States to this total, such a donor base would have yielded fewer than 29 organ donors for transplants in China. The sum of reported donation numbers (mainly from non-registered donors in intensive care units) in each region was also far fewer than the official figure of 15,000 transplants performed. Yet tens of thousands of transplants are performed at Chinese hospitals each year.

On-demand transplants to foreigners continue: Official Chinese statements that no transplants are performed for foreigners have been discredited by recent investigations. In October 2017, journalists from a major Korean television station found that foreign patients from other parts of Asia and the Middle East are still flocking to one of the largest transplant centers in China. Patients were quoted wait times of just days or weeks, with additional monetary “donations” to the hospital resulting in expedited surgeries.

Regulation has not kept pace with claimed reform: China’s organ donation system and regulatory framework are still in their infancy and cannot support the number of transplants being performed in China and their on-demand nature. Agencies providing oversight for the donation system remain empty shells, and most organs used for transplants do not come from the national donation and allocation system that is often presented to the international community.

An alternate source of organs remains necessary: Because voluntary donations cannot support the number of transplants performed and experts acknowledge that criminal executions have shrunk in recent years, most of the organs are continuously taken from prisoners of conscience in extrajudicial killings. The primary victims are Falun Gong practitioners, who remain the largest group of prisoners of conscience in China, and have been systematically detained, imprisoned, tortured, and forcibly given blood tests and medical examinations both in state custody and in their homes.

Professor Arthur Caplan, the head of the division of medical ethics at New York University’s School of Medicine, wrote in a foreword to the report, “China, as this outstanding, thorough, and well-documented report shows, continues to permit abuses of human rights and the minimal ethical treatment of its citizens in permitting killing in order to obtain organs for transplant.”

At the press conference announcing the report’s release, Dr. Huige Li, Professor at the University Medical Center of Mainz and a co-author of the report, introduced the characteristics and on-demand nature of transplants in China: prescheduled surgeries, short wait times, and the extraction of whole vital organs from living sources, effectively killing the donor. He analyzed a case reported in a Chinese medical journal in which an organ “donor” satisfied neither brain death nor cardiac death criteria but was living at the time of organ extraction.

Grace Yin, the author of the report and executive director of COHRC, said that China came to perform more transplants than any other country in just a few years after the industry took off in 2000 despite a dearth of voluntary organ donations. In addition, the industry continued to grow after forced organ harvesting first gained international attention in 2006. The official figure of 10,000-15,000 transplants per year in China is an underestimate and can be easily exceeded by only a few hospitals.

For example, COHRC estimated that the Tianjin Oriental Organ Transplant Center alone has the capacity to conduct 6,000 to 8,000 surgeries a year. The director of the Liver Transplant Center at Peking University, Zhu Jiye, stated in 2013 that his center performed 4,000 liver transplants in one year.

Based on government-imposed minimum capacity requirements for transplant centers, the original 164 transplant hospitals approved by the Ministry of Health would have a combined capacity of approximately 70,000 transplants per year. This is equivalent to a capacity of more than one million total transplants since 2000.

David Matas, a Canadian human rights lawyer and pioneer in the research of organ transplant abuse in China, said, “The new report disappointed me because it confirmed what I have seen—that China hasn’t changed. It increased [its] coverup.” 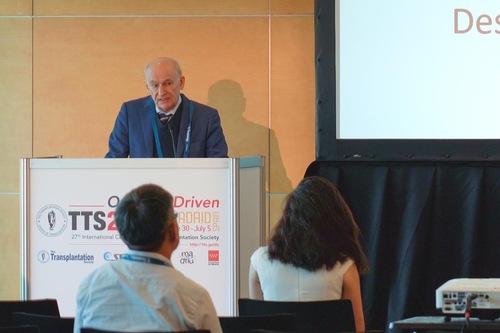 David Matas speaks at the International Congress of The Transplantation Society in Madrid, Spain.

The new report finds that the number of organs from both registered donors and deceased patients in ICUs, as cited by the Chinese regime, can far from supply even the 15,000 transplants acknowledged by the government.

“Official accounts indicate that the percentage of organs sourced from donations jumped from 23% in 2013 to 80% in 2014, with voluntary donations becoming the sole official organ source in 2015. It is not plausible that such a complete transition in this system could have taken place in just one or two years,” said David Li, a co-author of the report.

The evidence presented in the report suggests that these organs are taken from prisoners of conscience in extrajudicial killings; Falun Gong practitioners are the largest group of prisoners of conscience in China and remain the primary victims of organ harvesting. China’s transplant industry began its exponential growth after the Chinese regime launched its campaign to eradicate the spiritual practice in 1999 and prioritized organ transplantation in its national strategy with significant investment in research, development, industrialization, and personnel training.

Bai Shuzhong, former head of the People’s Liberation Army General Logistics Department Health Division, said in a phone investigation conducted by the World Organization of Investigation of Persecution of Falun Gong in 2014 that it was Jiang Zemin, then Chairman of the Central Military Committee, who issued an instruction to carry out organ harvesting from Falun Gong practitioners: “Chairman Jiang [Zemin] … gave instructions on this ... about people selling kidneys for transplant surgeries … after Jiang issued the order, we all did a lot of work against the Falun Gong practitioners.”

In an interview with the People's Daily (the largest state-run newspaper in China) in 2001, Huang Jiefu, China’s top transplant official and spokesperson, said, “The fight against Falun Gong is a serious political war, and we should not have mercy on the handful of core members.”

The new report concludes, “The harvesting of organs from prisoners of conscience for transplantation supports the government’s campaign to destroy groups it labels ‘enemies of the state,’ serves its United Front efforts to gain influence with foreign dignitaries and the elite of overseas Chinese, and provides fame, promotion, and wealth incentivization to hospitals and doctors who participate in these abuses.”

Nevertheless, China’s purported reform has gained recognition by some international transplant organizations as a result of public relations campaigns, use of questionable data, aggressive roadmaps, transplant center showcases, and presentations at international forums.

Given that China’s transplant system continues to be supported by the killing of innocents, the authors warn, “By expanding agreements to share organs with other parts of Asia, Belt and Road regions, and beyond, the Chinese regime also risks implicating the international community in its crimes.”

Dr. Caplan also wrote in his foreword, “The report must be attended to by both the transplant community and governments all over the world. Read this report and then push your government to act to redress what must end.”

The China Organ Harvest Research Center (COHRC) is a nonprofit organization that conducts and presents authoritative research on organ transplant abuse in China, including the killing of prisoners of conscience for organs. COHRC researchers seek out and analyze evidence from a wide range of Chinese and overseas sources.

“[Minghui Fahui] Elevating in the Fa and Overcoming Obstacles Together”