(Minghui.org) Dana Rohrabacher, a member of the U.S House of Representatives from California, introduced H.Res.932 on June 8, 2018. The resolution expresses solidarity with the Tuidang Movement, which encourages individuals to renounce the oaths they made to the Chinese Communist Party (CCP) and its affiliated organizations. It also calls for an immediate end to the persecution of Falun Gong in China. This resolution has been submitted to the House Foreign Affairs Committee. 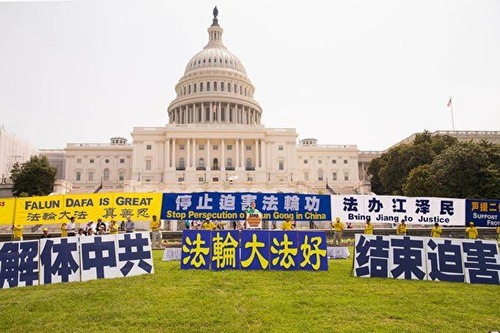 Rally in front of Capitol Hill in Washington D.C. in July 2017.

The resolution states that the CCP has not only led to the unnatural deaths of at least 60 million people in China but also suppresses peaceful movements, including in the Tiananmen Square Massacre and the 19-year-long persecution of Falun Gong.

According to information from the World Organization to Investigate the Persecution of Falun Gong (WOIPFG), the CCP has carried out the genocidal killing of Falun Gong practitioners by means of live organ harvesting. In particular, the central Communist Party leadership established the “610 Office” on June 10, 1999, to coordinate and execute operations aimed at eliminating practitioners of Falun Gong.

The resolution recognized that approximately 300 million people have renounced their memberships in the CCP by 2018.

Therefore, the House of Representatives “calls upon the Chinese Communist Party (CCP) to immediately cease and desist its campaign to persecute Falun Gong.”

“The Movement Has Changed Hearts and Minds in China”

The Tuidang Movement started in 2004 after the Nine Commentaries on the Communist Party was published by the Epoch Times. Since then, more than 307 million have chosen to quit the Chinese Communist Party and its youth organizations, the Young Pioneers, and the Communist Youth League.

During a forum held on December 20, 2017, several congressional representatives condemned the suppression of Falun Gong in China. U.S. Congressman Steve King said that Falun Gong practitioners' human rights have been trampled, “A group of people that is 70 to 100 million are denied their freedoms, basic human rights, and their natural rights. They are then persecuted and tortured and marginalized and killed. Their organs are sold into the marketplace for somebody else to live off of. It is an awful record of disrespect in contempt for human rights that comes out of the Marxist government of the Communist Party of China.” 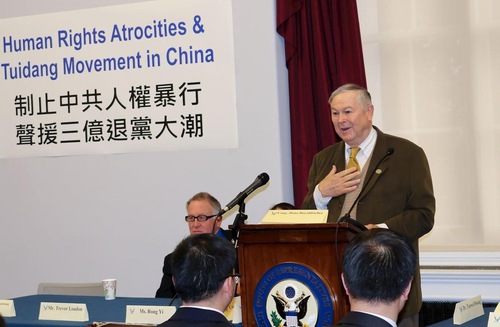 U.S. Representative Dana Rohrabacher speaks at a forum on December 20, 2017.

Rohrabacher said, “The withdrawing movement is vitally important to give those people who are in this evil system a chance to get out, and a chance not to participate in the repression of their own people and a threat to the world.”

Their letter stated, “We must never be silent about the atrocities experienced by the Falun Gong in China and we must work to hold those responsible accountable for their crimes. The Communist Party bears responsibility for the torture and arbitrary detention of Falun Gong practitioners. In recent years we have both been proud to cosponsor legislation in the House and Senate expressing solidarity with Falun Gong practitioners and condemning the practice of non-consenting organ harvesting.”

At another forum on May 9, 2018, Rohrabacher said of the Tuidang Movement, “I know the sacrifices made. Without any chance of overwhelming these gangsters that control China, they stood firm and strong, inspired other Chinese people, and inspired the world.

Smith sent a letter supporting the movement to quit the CCP. “The movement has changed hearts and minds in China and freed so many from the CCP's indoctrination and corruption,” he wrote.