(Minghui.org) When people discover something good, they want to share it. When something good is threatened, people will call for help. Such is the case with Falun Gong, also called Falun Dafa, a Chinese cultivation practice for mind, body, and spirit. Falun Gong practitioners want to share this powerful and life-changing practice with those who are interested, and also actively raise awareness of the brutal 19-year persecution faced by the practice in China.

This report covers recent events in England, France, Canada, and New Zealand that focused on raising public awareness of the persecution. Practitioners called for support to secure the release of loved-ones imprisoned in China and exposed the regime's state-sanctioned forced organ harvesting from prisoners of conscience, the majority of whom are Falun Gong practitioners.

On June 3, practitioners in London held an event to call for help in securing the freedom of their family members imprisoned in China for their belief in Falun Gong.

Ms. Wang Meihong and 14 other practitioners were arrested on April 23 in Mudanjiang City, Heilongjiang Province, China. Thousands of miles away in London, her daughter Ming Hui is calling attention to her family's plight. 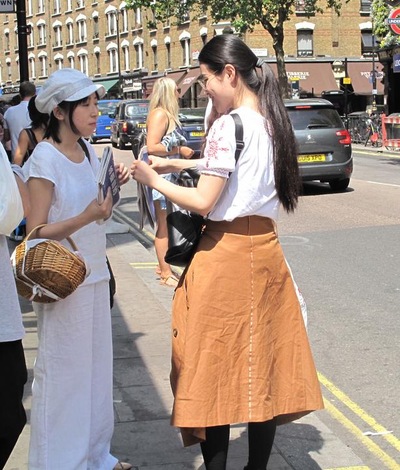 Ming Hui (left) tells a passerby about her mother being persecuted in China.

Ming Hui says that she lost contact with her mother in March. 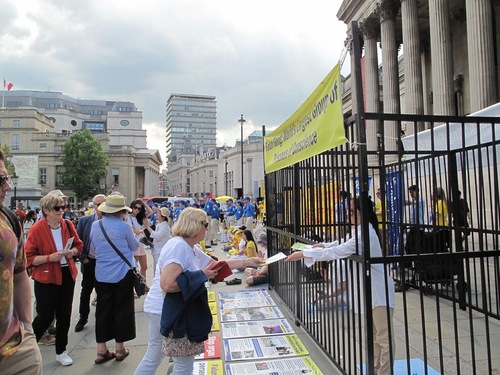 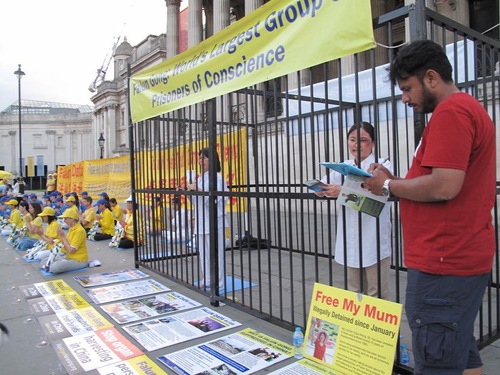 Holding a picture of her mother, Xiao Tong stands in a cage, re-enacting the torture that the Communist Party regularly uses on Falun Gong practitioners.

Xiao Tong's mother, Wang Yujue, was sentenced to three and a half years after her arrest on January 22, 2018, in Henan Province. Her family in China have not been allowed to visit her.

Xiao Tong hopes that the public will recognize the severity of the persecution through her mother's story.

“People's responses are encouraging,” Xiao Tong said. “Many people have expressed their support for our peaceful resistance.” 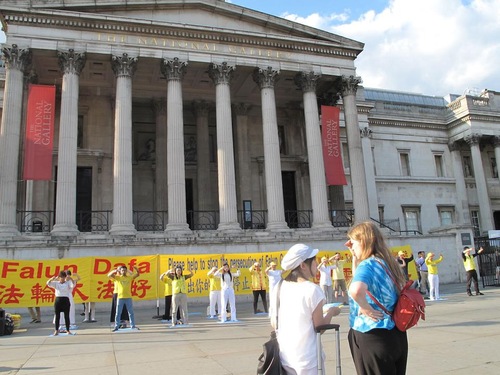 Nicky Bell, a local resident, strongly condemned the persecution in China and signed the petition to support Falun Gong. “It is unfair that one's life is placed in danger and fear only because of her belief, a belief that does no harm,” she said. 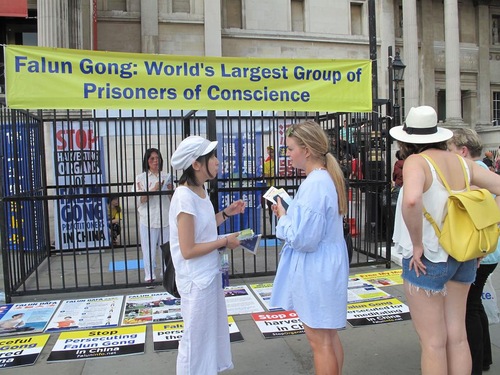 Becca Monaghan (right), a journalism student, encouraged practitioners to keep up the good work in letting more people know about this “crazy persecution.”

That same day, across the English Channel, practitioners in Paris held a similar event in front of the Eiffel Tower. Over the course of the event, many people signed the petition to condemn the persecution in China. 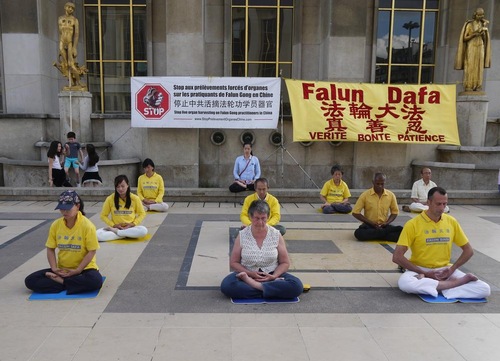 Demonstrating the exercises near the Eiffel Tower 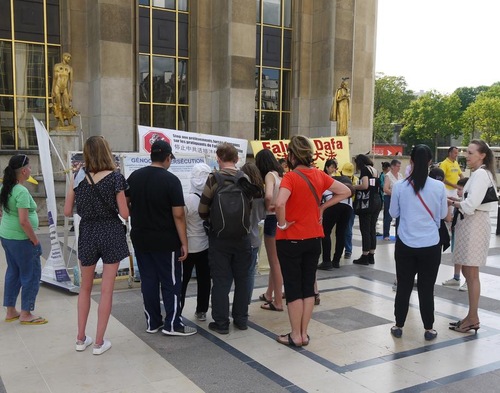 Tourists read materials about Falun Gong and the persecution in China. 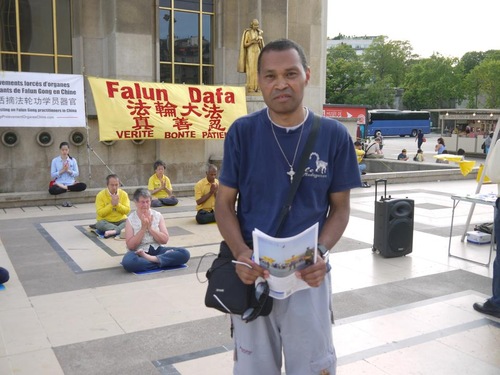 Clement said he is adamantly against the persecution. He believes that the international community should stand up and help stop the forced organ harvesting in China. 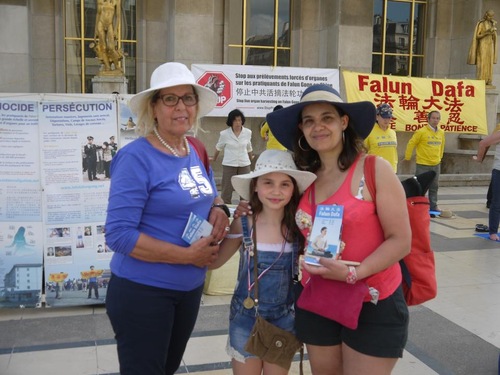 Kardhoum Cherif, a human rights activist, said that dictators always get punished eventually, but she felt sad about the human rights crisis in China. “Nonetheless, China is a country with spirituality. Today, I found out about Falun Gong, which is a beautiful and powerful practice,” she added. “Although some practitioners passed away due to the persecution, their spirit is with us.” Kardhoum encouraged practitioners to continue making their voices heard and encouraged Chinese people to stand up against the dictators.

Canadian practitioners held a screening of a documentary on the campus of Dalhousie University during the 29th annual Canadian Bioethics Society Conference in Halifax, Nova Scotia.

The documentary, Human Harvest, tells the story of the state-sanctioned organ harvesting in China. The documentary won the Peabody Award in 2016 and the Best Documentary award at the 2015 Hamilton Movie Festival in Canada.

David Matas, a well-known Canadian human rights lawyer featured in the film for his investigative work into organ harvesting crimes, attended the screening and took questions from the audience. 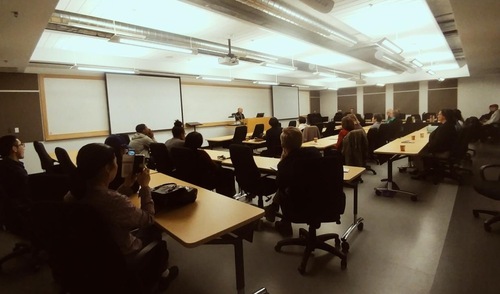 David Matas fields questions from the audience after the screening of Human Harvest.

Mr. Matas presented evidence showing that the forced organ harvesting allegations are true. Among all the pieces of evidence that he and his coworkers collected during their investigation, 2,200 of them came from the Chinese regime's own documents, he said.

An organ transplant physician in the audience explained the difficulties of finding a suitable organ match for any transplantation surgery. According to her, without a large organ source, it is impossible for a hospital to find a match within the short period of time that the Chinese hospitals promise in their advertisements.

The audience was shocked and concerned by what they learned. People asked what they could do to help and discussed how to make laws to stop such crimes. 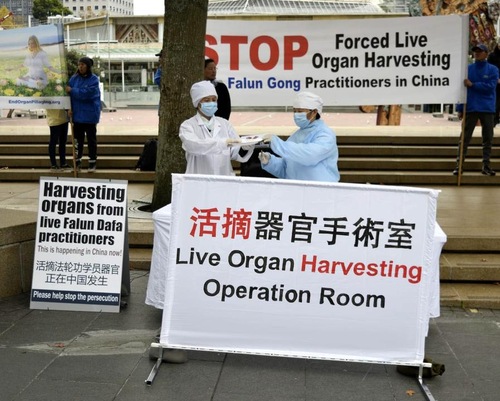 A re-enactment in downtown Auckland draws attention to the forced organ harvesting of prisoners of conscience in China. 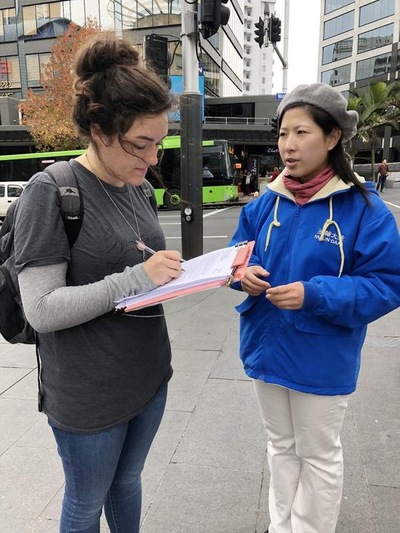 Bridget Connolly signs the petition to protest the persecution of Falun Gong in China. She had difficulty believing that people could lose their lives because of a peaceful practice. She said she would tell her friends about this through social media. 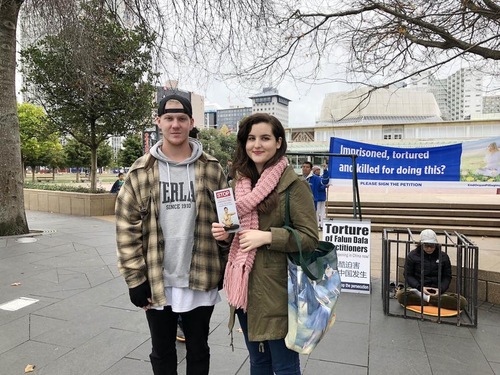 James Carter and his sister Sarah Carter asked practitioners many questions about the forced organ harvesting. They believe that the Chinese government is “corrupt” and hope that the international community can do more to support Falun Gong. 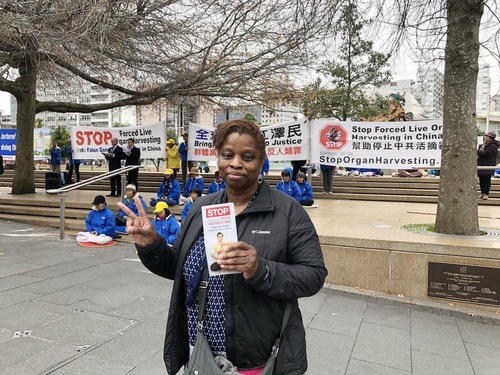 Natina Harris from the U.S. has seen the documentary about China's forced organ harvesting crimes. She also hopes that more people will come out to help Falun Gong. “If everybody supports justice, the Chinese government will stop the persecution,” she said. “We all live on this planet, and we should help each other.”

“Cultivating Diligently with Other Practitioners by Following Minghui”

“Western Practitioner: Some Thoughts on My Journey of Cultivation”