(Minghui.org) Falun Dafa volunteer assistants in Southern Taiwan attended an experience sharing conference at the Chiayi City Labor Recreation Center on June 9th and 10th, 2018. In breakout sessions over the course of the first day and a half, they shared their insights into self-cultivation and assisting others at their local practice sites.

The next afternoon, a large group sharing was held about truth-clarification media work, promoting Shen Yun, and clarifying the facts at tourist sites. Conference attendees learned from each other and discovered where they might have fallen short, with a common goal of making collective improvement. 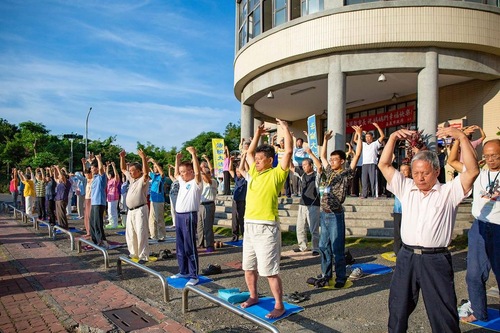 Falun Dafa volunteer assistants in Southern Taiwan do the exercises in a group on the morning of the experience sharing conference. 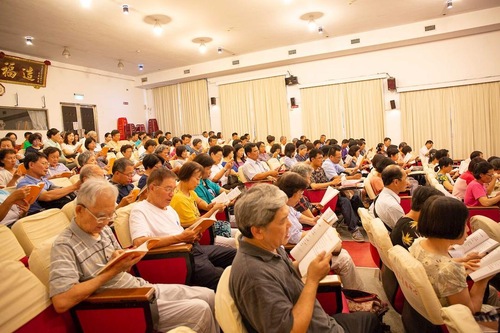 Group Fa study in the auditorium of the Chiayi City Labor Recreation Center.

Breakout session topics included how to do the three things well, insights into coordinating group activities, and helping fellow practitioners to make improvement overall. Many assistants said that they have deeply felt the benefits of Falun Dafa, which motivated them to volunteer their time to help others. 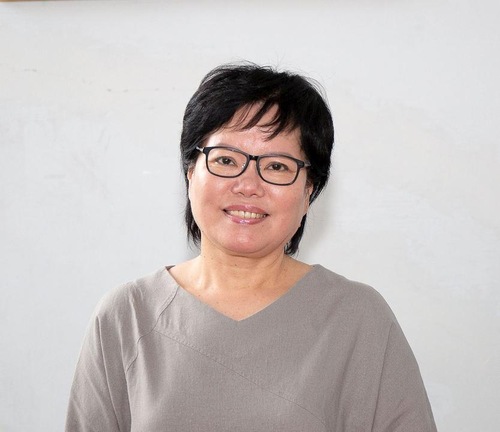 Jinhua thanks Falun Dafa for saving her life.

Jinhua, wife of the Meishan Township supervisor, had been diagnosed with an incurable disease six years ago. She spent millions of Taiwan dollars on a variety of Western and Chinese medicines, but nothing helped. Her face remained red, swollen, and hot. The only way she could gain any relief was to apply ice packs, spray water on her face, or sit in front of an air conditioner. Taking steroids made her gain weight and deformed her face and shoulders. She stayed indoors most of the time and became depressed.

A doctor, as well as her son, recommended Falun Dafa to Jinhua, and she decided to look into it. She used to hate reading books in small fonts, but she soon read more than 40 Falun Dafa books again and again, and didn't want to stop. Jinhua did her best to follow Falun Dafa's principles of Truthfulness-Compassion-Forbearance. She used to have a bad temper, but she was able to overcome it after she started cultivating Falun Dafa. Many of her health problems were gone before she knew it. She found out later that there were exercises, so she started doing the exercises every day. The damaged skin on her face began to peel off, layer after layer. Eventually, her face was no longer red and swollen, and her skin became very fine and smooth.

Jinhua shared, “It's such a great practice! I really hope that more people will benefit from it. Many tea farmers and business owners can't go to our group exercises in the morning, so I set up an evening group exercise site for them. Many people in my area have started cultivating themselves according to Dafa. 'The Buddha-light illuminates everywhere and harmonizes everything,' thanks to Master [Li, the founder of Falun Dafa]!”

Putting Others Before Myself

Xufeng is the owner of a heavy machinery parts shop. His entire family practices Falun Dafa. Xufeng shared how he applies Dafa's principles to his work, putting his customers' interests before his own. When his customers come to buy replacement parts, Xufeng tries his best to help them repair the broken parts, so they won't have to the spend money on new ones. His service and superb skills are well recognized by his customers. Xufeng and his wife also clarified the facts of Falun Dafa to their customers. Many of them have signed a petition condemning the persecution of Dafa practitioners by the Chinese Communist Party.

Fellow practitioners often study the Fa and hold group discussions in Xufeng's home. Xufeng and his wife noticed that some elderly practitioners were frustrated by the fact that they couldn't participate in truth-clarification projects, because they couldn't read or speak Mandarin. Xufeng and his wife paid special attention to them, encouraged them in their own languages, and created an atmosphere of sincere and honest communication within the group. Now, many elderly practitioners are actively involved in projects they can help with. Xufeng said, “I have improved during the process of helping them. It gave me an opportunity to let go of my human notions and attachments and join in with the whole body of practitioners. I feel more at peace.”

Improving Xinxing through Memorizing the Fa 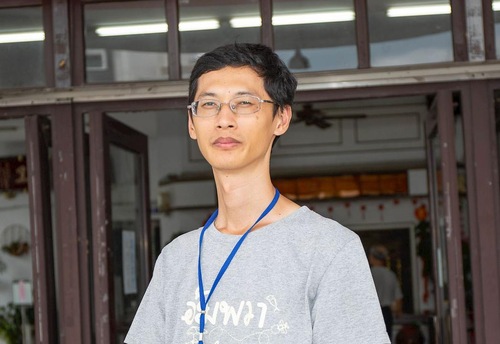 Zhongyu has benefitted a great deal from memorizing the Fa.

Zhongyu is the leader of the information technology team at his school. After his wife started practicing Falun Dafa, Zhongyu noticed her positive changes and read the book Zhuan Falun out of curiosity. Ever since then, he started cultivating himself according to Dafa's principles as well.

Zhongyu used to have serious stomach problems. He had diarrhea no matter what he ate. After he started cultivating, his diarrhea stopped before he knew it, and he became healthy and energetic. Cultivation also improved his xinxing. When some of his colleagues gave him extra work, he always did his best to help. His colleagues now know that practicing Falun Dafa makes people more compassionate and thoughtful.

For a period of time, Zhongyu found it hard to concentrate during Fa study. He had a wish to memorize the Fa. After reading other practitioners' experiences on the Minghui website, Zhongyu started committing the Fa to memory every day. Years of effort paid off. Now he can follow along at group study without even looking at the book. Zhongyu said, “Memorizing the Fa has deepened my understanding. Every time I memorized something, I gained a new understanding. I continue to read and memorize Zhuan Falun every day. My mind has become more and more clear. Whenever I run into a test in life, my first reaction is to recall what Master has taught us. It helps me improve my xinxing and resolve problems.” 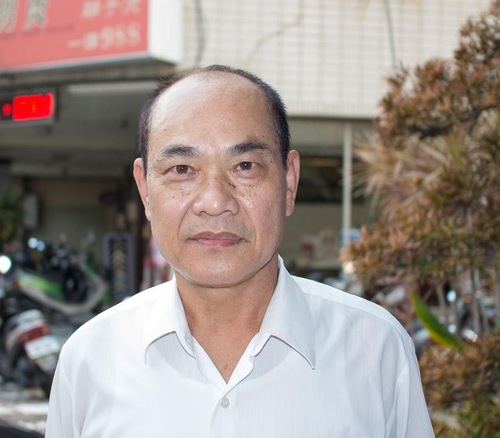 Shiyu used to be a Feng Shui master and he was very proud of his abilities. He has a habit of jogging in the mornings. One morning, his alarm clock unexpectedly went off at 4 a.m. He got up and went jogging. When he passed a lumber factory, he saw a man meditating in front of the gate. To his surprise, the man's whole body emitted bright golden rays of light as tall as a multi-story building. They were far taller than the factory.

Shiyu felt that a divine being was present. He thought, “I will jog over to him. If he gets up and tells me to learn his practice, I will.” When he got close, the man suddenly stood up and asked him, “Would you like to learn this practice?” Shiyu was stunned. This man knew what he was thinking. Shiyu immediately agreed to learn the practice.

After he started cultivating himself according to Dafa, he realized how little he had known before. He stopped acting proud. Instead, he was filled with admiration for the profound principles of Falun Dafa and realized how negligible his lesser abilities and skills were. Soon afterward, he began to volunteer as an assistant and help his fellow practitioners.

“Cultivating Diligently with Other Practitioners by Following Minghui”