(Minghui.org) Practitioners across the Atlantic Ocean have participated numerous events to share the practice of Falun Dafa in local communities. This report covers events held in New York City and Cologne, Germany.

The Sixth Avenue Shopping Spectacular took place at Manhattan on June 2, 2018. Falun Dafa practitioners set up a booth and celebrated the special occasion with hundreds of other vendors.

Impressed by the practitioners dressed in yellow, and the peaceful exercise music, many passersby stopped to read information and talk with practitioners. Some also began learning the exercises from practitioners on the spot.

Mangalika, a college instructor, was curious about the gentle movements. She talked with a practitioner and learned about Falun Dafa cultivation practice. She said she was very interested in it. She also learned about the persecution in China and expressed hope that it would stop soon. Before leaving, she thanked the practitioner and said, “I am so glad to meet all of you. This will be a turning point in my life.” 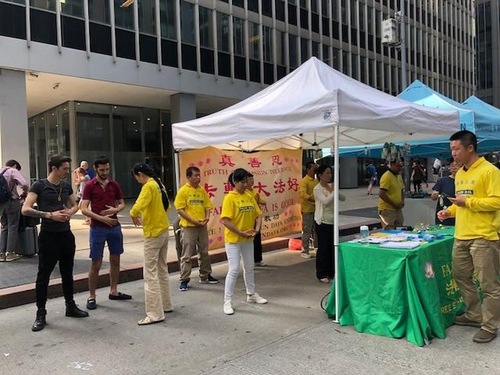 Passersby learn the exercises from Falun Dafa practitioners during the Sixth Avenue Shopping Spectacular in Manhattan on June 2, 2018.

Ed, who has two children, asked about the paper lotus flowers. A practitioner explained that the flowers were handmade, and represent peace and purity. Pointing to the words of Truthfulness-Compassion-Forbearance, Ed said he liked these principles. “Having two children to take care of, along with pressure from life, often make me stressful. That is why I have been looking something like this for relaxation.” He was excited after hearing about a group exercise practice site at nearby Bryant Park, saying that he could join during his lunch break. In the end, he took two lotus flowers for his children and said he would learn the exercises with them.

Angel said she was curious when saw about 20 people sitting in a circle meditating at Madison Square Park last week. She wondered what they were doing, but was hesitant to interrupt them. She was happy to see the same exercise at the booth today, and learned that it was the fifth exercise of Falun Dafa. Angel said she liked the peaceful exercises and planned to go to Madison Square Park next week to learn them.

Practitioners were invited to the Cologne Creative Summer on June 9-10. More than 100 exhibitors attended the event, which drew about 10,000 participants, many of whom were teachers from schools and daycare centers in the region.

The booth set up by practitioners attracted much attention with the beautiful music and the yellow background and green blanket. Quite a few passersby talked with practitioners and some signed petitions opposing the persecution in China. 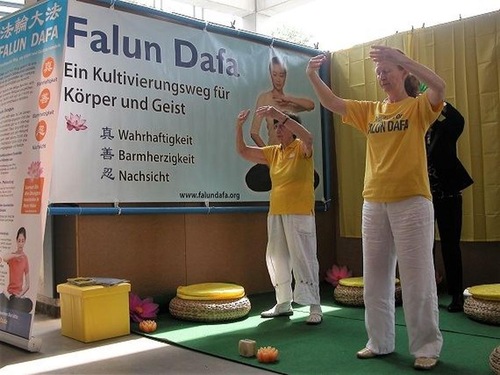 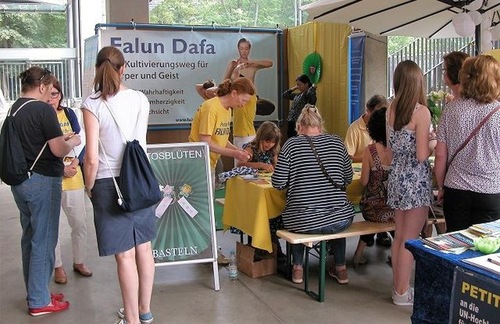 Group exercises and Falun Dafa activities were highlights at the Cologne Creative Summer on June 9-10.

One elementary teacher brought her students to the exhibition. The students learned how to make paper lotus flowers, while the teacher learned the exercises. She thanked the practitioners for offering such a nice setting. “Kids nowadays have many distractions from television and electronic games. It is difficult for them to calm down and focus on something.” She was impressed that the students were able to concentrate on the activities here. She said she would tell more people about the practice.

A woman in her sixties watched the exercise demo for a while and talked with a practitioner to learn more about the practice. She was very excited to hear the principles of Truthfulness-Compassion-Forbearance. She said she worked at an airport and was under a lot of pressure every day. She said she was even planning to leave the city for a remote area to help reduce her stress.

She remarked, “If more people are like you and follow the principles of Truthfulness-Compassion-Forbearance, many problems in the society would have been avoided.” She asked for information about group exercise sites, and said that both she and her husband were very interested in learning them.

“A Bulgarian Seaman Takes the Path of Falun Dafa Cultivation”