(Minghui.org) During Falun Gong's parade and rally at London’s Trafalgar Square, spectator Vinod Kurup, a nurse manager from north London, said, “The persecution of Falun Gong is wrong. Falun Gong practitioners are peaceful and they are merely expressing their opinions. I support Falun Gong! Their anti-persecution efforts are important. More people should support their endeavors.”

Falun Gong practitioners from the United Kingdom and the Tian Guo Marching Band organized a series of activities in London on June 3, 2018, to exhibit the merits of Falun Gong and expose the persecution and crimes of forced organ harvesting in China.

Falun Gong, also called Falun Dafa, started the one-day event across from the Chinese Embassy in the morning. After a group exercise and rally, Falun Gong practitioners began the parade by proceeding through downtown London and Chinatown, and arrived at the National Gallery in the afternoon.

The practitioners demonstrated the exercises at Trafalgar Square, talked to people about the ongoing persecution during the afternoon, and held a candlelight vigil in the evening.

Falun Gong group exercise practice across the street from the Chinese Embassy. 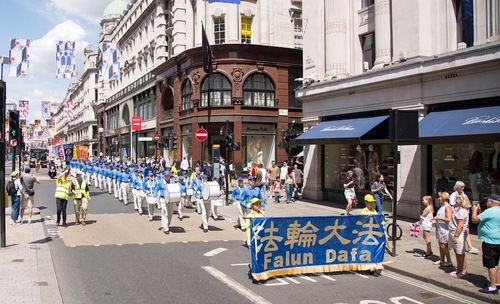 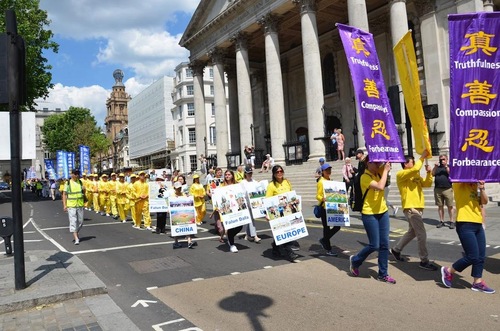 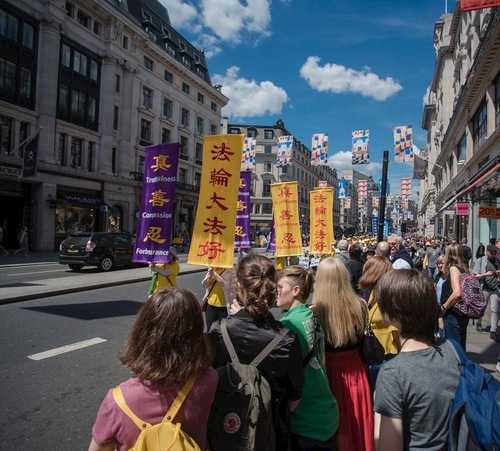 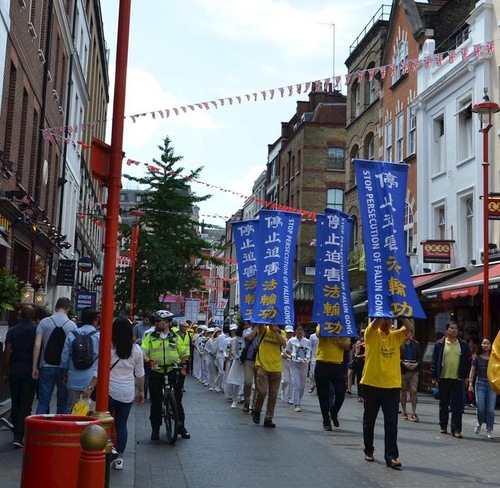 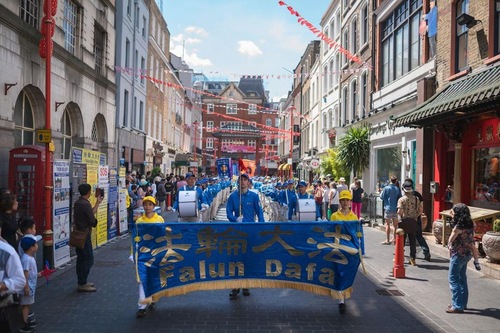 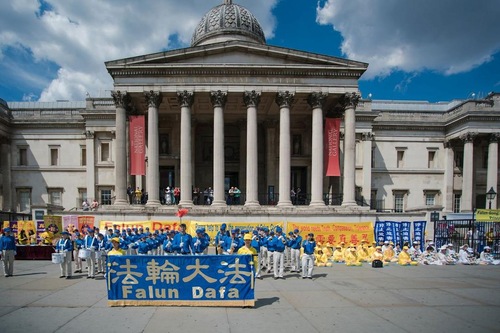 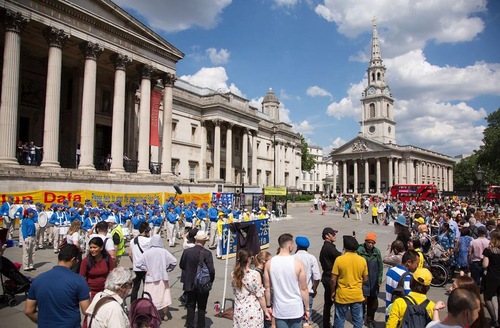 Falun Gong practitioners talked to people about the persecution at the National Gallery.

Many Chinese people watched the parade along the route. Ms. Li from Taiwan expressed her support, saying, “Their spirit is very touching. (People) should have freedom of belief.”

A group of Chinese tourists from Hong Kong praised the parade for being “solemn.” Ms. Liu from Beijing said she knew Falun Gong was persecuted in China and stated that she was happy to see Falun Gong parading in London.

Many People Heard About Falun Gong for the First Time 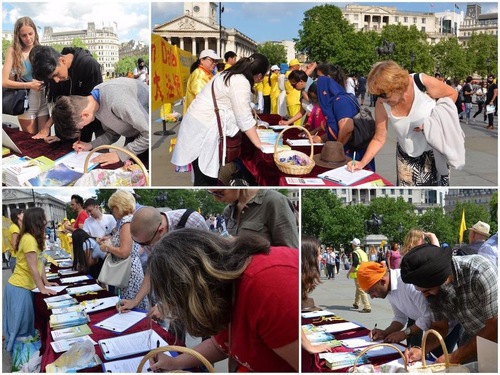 People of all different nationalities signed a petition supporting efforts to end the persecution of Falun Gong in China. 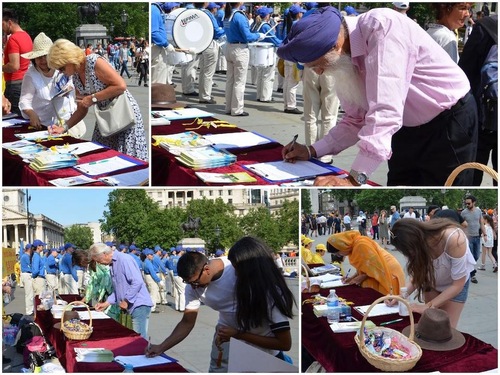 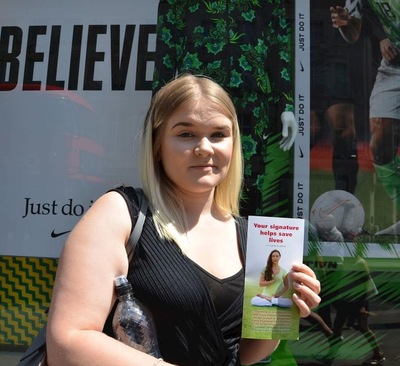 Holly said that she didn't know about the persecution before seeing the parade. 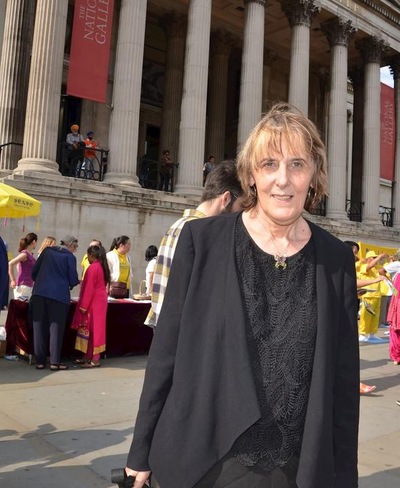 French language teacher Christine and friends said they felt the Chinese Communist Party's persecution and forced organ harvesting were evil. “I can't imagine they can do that like animals. You are doing a meaningful deed. Please hang on!” Christine commented. 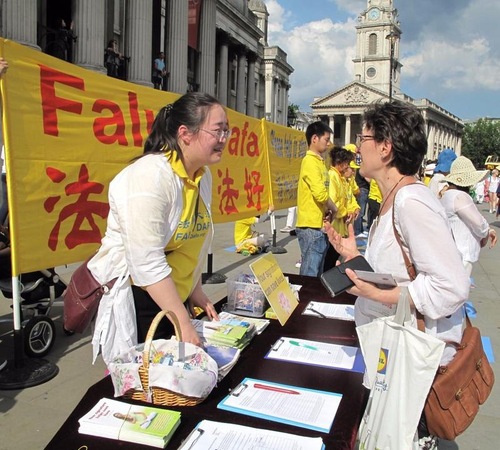 Marilena Bita, from Romania, said she is currently working at a clinic in London. She had worked in a hospital in Romania and already understood how evil a communist regime could be. She said, “I felt the positive energy here. I met true people here. Every smile and every pair of eyes are telling a true story. No matter how, I will do my best to help (Falun Gong).” 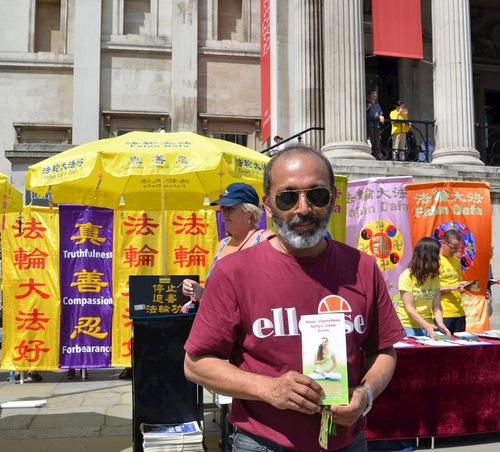 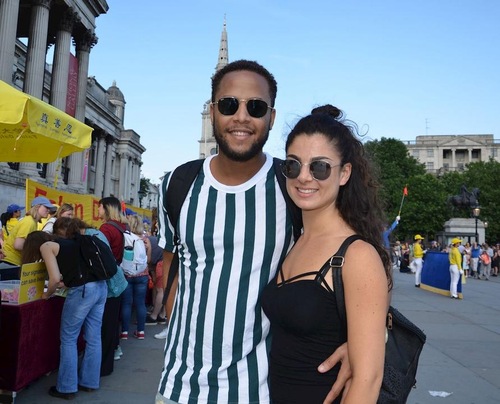 Letizia (right) a psychology student and her friend Luiji

Psychology student Letizia and her friend Luiji signed a petition supporting Falun Gong. Luiji was upset about the persecution in China. He said, “(The Chinese Communist Party) harvests human organs like a business. This is ridiculous.” 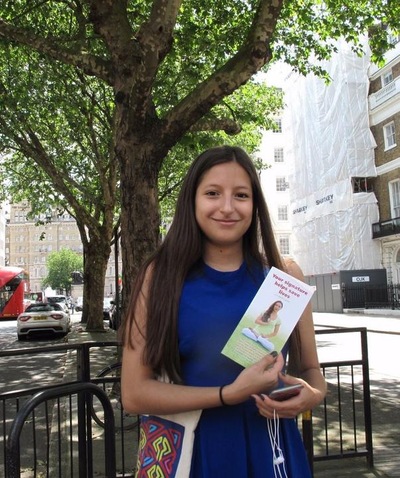 Valentina Martinez, a French girl studying in London, said the parade was peaceful but the message was powerful and it related to everyone.