The couple was taken to the Jianghan District Legal Education Institute (Yusun Mountain Brainwashing Center). They have been held there for nearly a month. Their families have never been notified of their whereabouts. 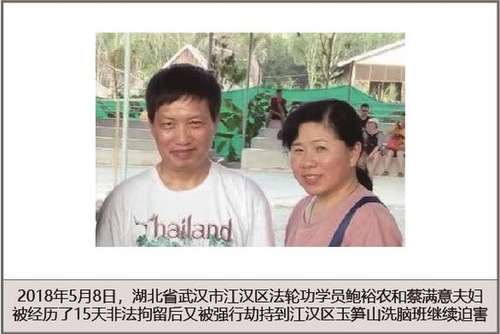 Another practitioner, Ms. Cai Donglian from the Hanyang District of Wuhan, was picked up by the community police on April 18, 2018, and taken to the brainwashing center. Participating in the seizure were the Wulidun Community Neighborhood Committee and the Jiangdi Community Neighborhood Committee in the Hanyang District of Wuhan City.

Ms. Zhou Aiying, a practitioner in the Jianghan District of Wuhan, was arrested on December 9, 2017, and detained for more than five months at the Yusun Mountain Brainwashing Center. She was not allowed to go home to celebrate Chinese New Year with her family. 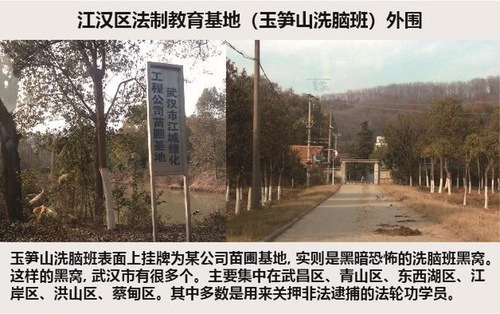 In Wuhan, Falun Gong practitioners are often incarcerated in brainwashing centers to try to force them to give up their faith in Truthfulness-Compassion-Forbearance.

The Jianghan District Legal Education Institute, also known as the “Yusun Mountain Brainwashing Center,” is located on a small hill near Yusun Mountain in the Caidian District on the outskirts of Wuhan. Its remote location makes it easier for the authorities to hide their nefarious activities. 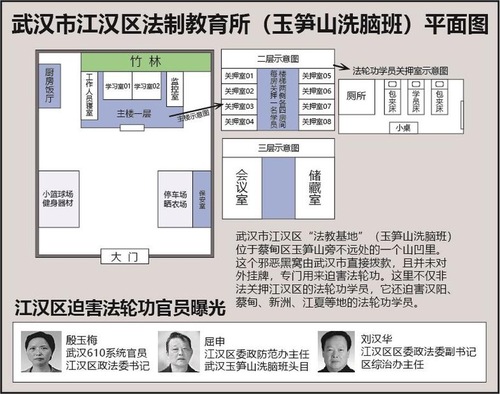 A diagram of the layout of the brainwashing center

Practitioners held in the center are routinely starved and poisoned. Poison is added to their food. The aftereffects are chronic and commonly include apathy and bloating. Occasionally, the prison personnel add additional snacks, pretending to show their care for the inmates. In fact, this is just another ploy to get the practitioners to injest more poison.

Each practitioner is closely monitored. There is no personal space or privacy. From 6:30 a.m. to 11:30 p.m, the practitioners are forced to listen to audio and video programs that demonize Falun Gong. The guards often turn the volume as high as it will go. In the afternoon, they force the practitioners to write articles to criticize and demonize Dafa. These daily routines attempt to wear down the practitioners' will and get them to renounce their faith. 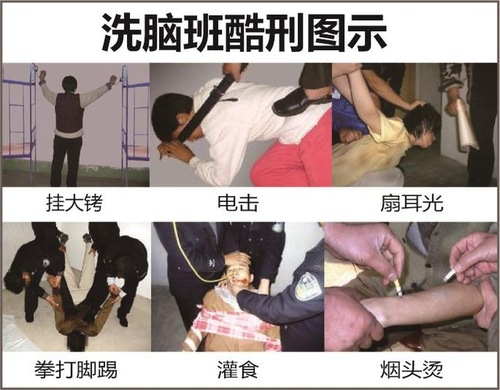 Below are some examples of government officials who have experienced karmic retribution after persecuting practitioners:

Qu Shen, the director of the Jianghan District's Prevention Office, who was involved in persecuting practitioners in the “Yusun Mountain Brainwashing Center,” has undergone two brain surgeries.

The former deputy mayor of Wuhan City, Li Zhong, another participant in the persecution, was investigated by the Hubei Provincial Commission for Discipline Inspection for serious violations of law and order on February 4, 2018.

Wang Chen, the former vice president of Wuhan Intermediate People's Court, who was also involved in the persecution, was also investigated by the Commission for Discipline Inspection for serious violations of law and order on May 8, 2018.

The Yusun Mountain Brainwashing Center is just one of many brainwashing centers in Wuhan. There are many more practitioners in Wuhan who are being illegally detained and tortured. We urge the Wuhan City Government to immediately release all Falun Gong practitioners. The international human rights community is monitoring and investigating these crimes.

For more contact information on parties involved in the persecution of Falun Gong practitioners in Wuhan, please check the link to the Chinese version of this article below.

“An English Practitioner: Clarifying the Facts and Cultivating in Hong Kong”