(Minghui.org) About 700 people live in my village. After Falun Gong (also known as Falun Dafa) was first introduced in Changchun, Jilin Province, in 1992, about 70 of us started to practice it. Despite the persecution, about 40 of us refused to give it up.

After the persecution began, our village was one of the hardest hit in the region. From the elderly to children, almost all of us practitioners were detained or threatened at one time or another. Even those in their 70s were no exception.

But as time went on, other residents saw how we behaved and began to agree with Falun Gong.

Village Party Secretary: 'We will build a big house for [people to do the Falun Gong] exercises'

When one resident went to the local police station to do paperwork, an officer asked him, “I heard there are many Falun Gong practitioners in your village. Is that true?”

“Yes,” came the reply. “And not only that, everyone likes them. If the police ever come again to arrest those practitioners, we won't let it happen.” The officer asked, “Why not?”

This person then told him a story. It was winter, and about three or four feet of snow blocked the road. There were only two days left before the deadline to turn in their required allotment of grain, but the vehicle could not get out of the village because of the snow. If they missed the deadline, the village would be fined and their education funds would be cut. “Someone tried to take grain out by ox cart, but the cart got stuck in the snow. The driver beat the ox so hard to try to get it out that he almost killed the ox,” this person explained.

The Party secretary was so worried that he got on the village speaker system and called for all members of the Party and the Youth League to come out and clean up the snow. But no one showed up. Instead, Falun Gong practitioners, from teenagers to those in their 70s, all came out and cleared a path.

“When they were finally able to get the grain shipment out, everyone was happy and gave the practitioners a thumbs up. Just think about it: Why wouldn't we thank Falun Gong?

“The Party secretary was also moved. He took a picture of the cleared road and said, 'When we have money in the future, we will build a big house for [people to do the Falun Gong] exercises.

“And that is just one example. Earlier this year, the bridge on the west side of the village collapsed due to poor maintenance. People in that area were very worried because they would not be able to sow their crops in time. Once again, it was Falun Gong practitioners who saved the day. At their own expense, they transported construction materials in their own vehicles and repaired the bridge. The farmers were able to get their seeds sown in time.

“We all know that Falun Gong practitioners are nice people with kind hearts. Do you think the communist party would ever do something like that?”

The officer smiled and didn't say a thing.

After one doctor in the village began to practice Falun Gong, he not only provided better service but also helped those who could not afford it. Everyone knew it. After the persecution started, this practitioner was arrested and sent to a detention center in the city. More than 90% of the village residents signed a petition testifying to his good character and demanding his release since he was innocent.

The 610 Office sent agents to the village to try to stop the effort, but no one listened to them. “We are doing this out of the goodness of our hearts—it is our own idea,” explained one resident.

After another practitioner was arrested, a resident went from the police station to the county 610 Office, trying to secure the practitioner's release. From an NTD television program he had seen, he knew Falun Gong was well received around the world. Plus, practitioners were always so nice and helpful.

The 610 Office chief who was listening then asked, “Are you a Falun Gong practitioner, too?”

The person replied, “We all know Falun Gong is good and want to practice it, but I'm not good enough.” He said that practicing Falun Gong means one does not fight back when being hit or criticized. “I can't do that, because I can't even quit smoking and drinking,” he added. “But to be honest, Falun Gong is indeed good.”

The office chief was very upset and he left without a word.

Four older women got up very early and were hanging banners about Falun Gong along the road all the way to the township government. The newly-appointed township Party secretary saw them and contacted the police station to have them arrested.

When the police came, the women began to tell them about Falun Gong and how much they had benefited from it. Many people gathered around to listen. One officer suggested that they go to the police station to continue their conversation. Knowing that the police station director was also new and needed to hear what they had to say, the women agreed.

At about that time, the village head showed up and began to talk with the police station director. He said the women did not do anything wrong. “Things will be just fine if you release them. If you detain them, what if all the Falun Gong practitioners in the village go to Beijing to protest?”

Soon afterward, all the women were released.

More than 90% Quit the Party Organizations

After the Nine Commentaries on the Communist Party was published in 2004, a major movement to quit the communist party organizations started in China. That happened in our village, too.

“I believe what these practitioners say. It's the Party that persecutes Falun Gong and has made up lies to defame it,” one resident said. “I agree,” said another. “We have all seen how the practice improved their health and helped them be considerate of others.”

One by one, they were willing to quit the communist party organizations. Some went to practitioners' homes to do so, some brought their friends along because they wanted to do the same. The village Party secretary, too, agreed to quit the Party. One older man, who used to claim that he was “a hardcore communist” also agreed, saying, “It seems the Party is done for. I don't want to stay with it any longer.”

Over 90% of the residents in my village have now severed their ties with the Party. When they go to work, many carry a “Falun Dafa is good” keepsake with them. 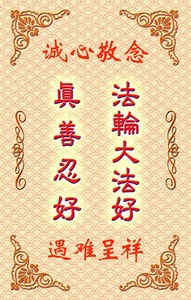 A typical Falun Dafa keepsake in China. It says, “Falun Dafa is good, Truthfulness-Compassion-Forbearance is good.”

Many residents have been blessed for their courage in supporting Dafa. Several of them once took a wagon to the city to shop. The wagon turned over into a roadside ditch on the way back, but everyone was fine. One resident who helped practitioners protect Falun Gong books after the persecution started had an unusual experience. At the construction site where he worked, he fell from the 7th floor. He was in a coma for two weeks but then miraculously recovered.

Many residents go to street fairs. Falun Gong practitioners also go to distribute materials and ask if people want to quit the Party.

One day, someone hurried to the police station. “I saw a few practitioners giving out brochures in the market. How can you let that happen? Go get them!”

An officer laughed and assured him, “Calm down. It seems to me that Falun Gong will be exonerated pretty soon.”

A practitioner's relative who witnessed this exchange said many police officers often read Falun Gong materials, know all about the persecution, and do not want to follow the persecution policy anymore.

The Exercise Music Is Being Heard Again

Back before the Party banned Falun Gong, the exercise music was heard every morning in many places in the village. But it stopped for over 10 years.

About four years ago, some practitioners started doing the exercises outdoors again. They also get together to read the Falun Gong books, especially in the summer. Occasionally, passersby go over to see what they are doing.