(Minghui.org) Today's news from China includes incidents of persecution that took place in 10 cities or counties in 7 provinces. According to this report, 7 Falun Gong practitioners were subjected to mistreatment during their detention, and at least 11 were illegally arrested. 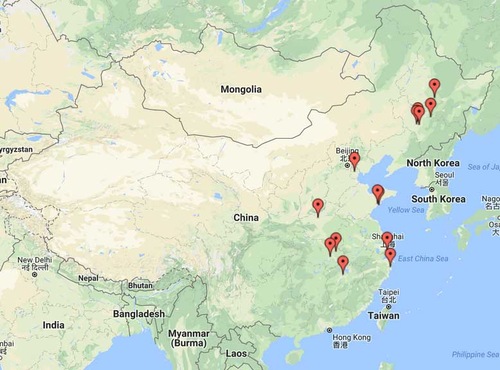 Mr. Gao Fuzhi from Bayan County is being held in the Bayan County Detention Center. He was admitted to the Bayan County People's Hospital from April 6 to April 12, but the detention center did not inform his family about his health or his hospitalization. Although Mr. Gao suffers from pancreatitis, cholecystitis, high blood pressure, and other diseases and can only take liquid food, the Bayan County Police Department refuses to release him.

Ms. Yao Changli was arrested at home by officers from the Shuguanglu Police Station on April 12, 2018. The officers ransacked her home and confiscated her Falun Gong books. Ms. Yao is being held at the Changchun City No.4 Detention Center.

Ms. Yu Meihua and Ms. Wang Li from the Jiutai District were arrested by Jiujiao Police Station officers on the morning of April 12, 2018, after the women were reported for talking to people about the persecution of Falun Gong. They were released that night after police extorted 20,000 yuan from them.

Ms. Han Chunying from the Shuangyang District has been held at the Changchun City No.4 Detention Center for more than two weeks. Her family has not been allowed to visit her.

Ms. Xu Shuye was arrested by officers from the Shulan Domestic Security Division on April 12, 2018.

Mr. Yue Jingnai of Lianzhuang Township in the Ninghe District in Tianjin was arrested when he was telling people about the persecution of Falun Gong in the Xiaohaibei Open Market in Tangshan City on April 11, 2018. He is being held at the Liujiahe Detention Center in the Fengrun District of Tangshan City.

Mr. Li and his wife from the Nankai District, Ms. Song from the Tiecheng Apartment in the Dongli District, and another practitioner whose family name is Li were arrested when they were distributing Falun Gong materials on the evening of April 10, 2018. They have been held in the Xiqing District Detention Center since April 11.

Ms. Sui Ying, 43, from the Development District in Qingdao City was arrested by Xingan Police Station officers around April 10, 2018, after she was reported for telling people about the persecution of Falun Gong. She is being held in the Pudong Detention Center in Jimo City.

Mr. Zhao Guangxu, around 30, was deceived by officers from the Lingzhushan Police Station in Qingdao City Development District into going to the neighborhood committee office, where he was arrested. He was then taken to the police station for interrogation. The officers ransacked his home and confiscated a picture of the teacher of Falun Gong, a computer, his U.S. passport, and other items.

Ms. Qu Chunxia was transferred to the Luoyang Detention Center by Domestic Security Division officers on March 28, 2018, after she had been detained for 15 days in another detention center.

Ms. Hu Guifen from the Jiading District in Shanghai was arrested on January 23, 2017. She was sentenced to two and a half years in prison on April 12, 2018. Ms. Hu is in poor health and weighs just over 70 pounds.

Ms. Zhu Aihua of Xiangshan County was arrested on the evening of December 11, 2017. She has been held at the Xiangshan Detention Center for more then four months.

Ms. Chen Yanfang from the Gufeng Community District in the Guanshan area of the Hongshan District in Wuhan City was arrested at home on the evening of April 9, 2018. Her home was ransacked. She is being held for 10 days in the Erzigou Detention Center in the Dongxihu area.

Ms. Li Mengxiang was sentenced to two years in prison and fined 4,000 yuan on March 30, 2018, in the Xinzhou District Court in Macheng City. The Wuhan City Middle Court denied her appeal.

Ms. Li is from Fuxin Village, Fuzihe Town, Macheng. She was arrested on March 7, 2017, for hanging Falun Gong banners and has been detained ever since.

“How My Cultivation Improved by Helping a Fellow Practitioner”

“What Have Falun Gong Practitioners Proven over the Past 19 Years?”