(Minghui.org) The Greater Philadelphia Falun Dafa Cultivation Conference was held successfully on May 12, 2018. Fifteen Falun Dafa practitioners shared their experiences of self-cultivation and truth clarification during the conference. 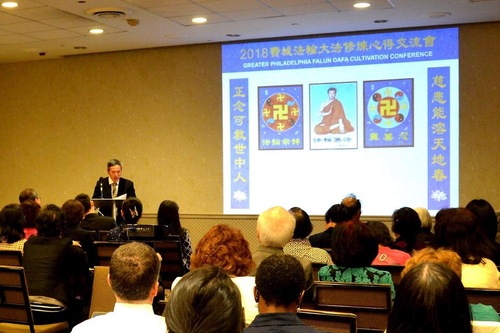 Breaking Through Life and Death Test

Ms. Yang shared her experience of breaking through a life-and-death test when Shen Yun performed in Philadelphia, which made her realize how serious cultivation was.

Ms. Yang said that she had slacked off more and more in her cultivation in recent years. She had gone a long time without doing the exercises. Her attachment to comfort had grown before she realized it. Only a couple of days after Shen Yun started the shows in Philadelphia, she started to experience symptoms of a urinary infection. Her lower abdomen experienced tremendous pain and felt as hard as a rock.

It was then that she began to look inward for her own problems. The first attachment she identified was her attachment to comfort, followed by her attachments to reputation, money, and sentiment. She realized that she had been neglecting her exercises for a long time, and regretted it deeply.

As Ms. Yang struggled with her feelings of guilt, a fellow practitioner from another city talked to her seriously. She said, “How can you lie in bed at this critical time? It's obviously due to interference. You can't acknowledge it.”

Ms. Yang sat up and sent forth righteous thoughts. She was in tears upon thinking, “I'm Master's disciple. Master will correct me no matter how poorly I have done.” It dawned on her, “How could I have forgotten that I'm Master's disciple, and no matter how poorly I had done, the enormous Dafa would be able to temper me!” She felt her righteous thoughts arise slowly.

She was in half asleep around noon when she clearly saw Master's image on the ceiling. Master looked at her with a compassionate smile and disappeared gradually. She couldn't believe her eyes. She got up, knelt down on the bed and pressed her hands together in front of her chest. She realized that Master was encouraging her with his appearance and telling her that he was with her.

The next morning, all her symptoms disappeared, as if nothing had happened. Ms. Yang said, “I will never forget my experience that week! It appeared to be a bad tribulation, but Master had turned it into something to uplift me and made me see where I had fallen short. I realized that cultivation is a process of solidly making improvements!”

Seizing Every Opportunity to Clarify Facts

Mrs. Zhao came to the United States three years ago. She had been telling people around her the facts about Falun Dafa, including her relatives, her immigration attorney, as well as her classmates and teachers in her English class.

A Chinese Indonesian found out about Falun Dafa from Mrs. Zhao, and started to read the Epoch Times newspaper. She would also take a few copies of the newspaper to her Chinese friends.

When a fellow practitioner's elderly parents came to the States for a visit, Mrs. Zhao helped him talk to his parents about Falun Dafa, who later became practitioners.

Mrs. Zhao also talked at length with a tour guide. After learning the facts, the tour guide told her, “Don't worry, Auntie. I won't stop my tour groups from listening to truth-clarification.”

Even though her English was limited, Mrs. Zhao managed to talk with Americans as well. Her 76-year-old English teacher is a Christian. After hearing about the Chinese Communist Party's crimes of harvesting organs from living Falun Gong practitioners, she signed a petition calling for an end to the organ harvesting.

Katt used to be a disabled housewife. She started to practice Falun Dafa two months ago and experienced huge improvements in her health and spirit.

According to Katt, she had been fighting psychological and health problems all her life. She had been disabled by injuries to her neck in 2009 and got Lyme Disease in 2010. She also had been diagnosed with facial muscle pain, bipolar disorder, depression and other diseases. She was bedridden for the past three years.

Katt said, “Even though I could do some chores, I would be exhausted and in pain after a couple of hours. Muscle spasms made me cry and scream. My hands were weak and clumsy. My right small finger was stuck in a bent position, which made it difficult to do the simplest chore. I kept hurting myself by accident. I had tried all kinds of medical treatment, but none of them worked.”

She heard about Falun Gong from a friend and started practicing Falun Gong two months ago. Soon she saw great changes. Her hands became stronger. She could pour coffee and open cans of cat food. She doesn't need any help with bathing and combing anymore. Her muscles used to have sudden spasms, but it happens less now.

Katt could lift her right arm for no more than a few seconds at first. Now she can hold her arm up for a minute. She has also extended her meditation time and can almost cross both of her legs. She said, “I can't believe that I have such energy and strength now.”

The most important improvement for her was on the psychological and emotional fronts. “My mind became clear and controllable. I used to panic very often, and feel angry with people and things. I used to be frustrated and hopeless about my own life. Now I can easily communicate with people. My relationship with my family and friends is much better. My stress is almost gone. The problems that used to bother me are no longer problems. I'm shocked by my huge progress. Now I can realize my shortcomings and wish for improvement. I look forward to joining Fa study sessions every week, because they give me happiness and peace.”