(Minghui.org) The 2018 Falun Dafa Cultivation Conference in Canada was held on May 13 at the Enercare Center in Toronto. Over 1,200 practitioners attended the event, and 18 speakers shared how they benefited from Falun Dafa and hoped to do better in their cultivation. 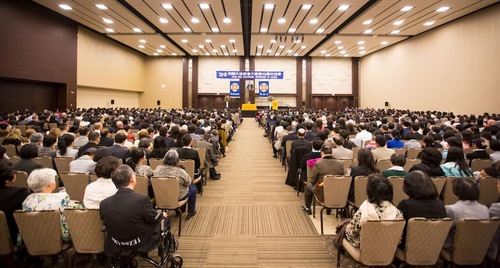 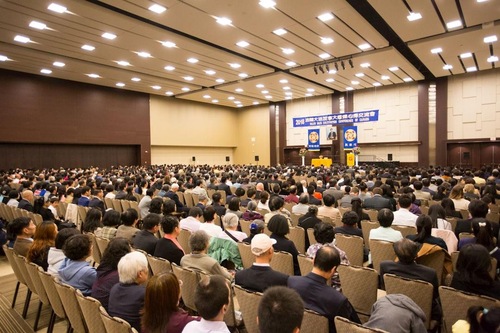 Attachments to Conflict and Jealousy

“I know I have jealousy, which is manifested at work, in my family, and in other social circumstances,” said Chrisy Trudeau from Vernon. She talked about eliminating jealousy and her attachment to conflict. More specifically, she knew she needed to identify their roots, keep looking within, fundamentally let go of those base thoughts, and meet the standard of a practitioner.

When arguing with her husband, she came to a deep understanding of the altercation that jealousy and the attachment to conflict are connected. The same thing happened at work: “One editor who works with me is very capable. When she gave me suggestions or commented on my work, my attachment to conflict and jealousy would surface, and my first reaction would be to validate myself to prove I was right.”

Later, she realized that she became jealous when she saw other practitioners' strengths that she did not have. “In fact, these skills come from Master and the Fa,” she said. “There is no point in competing with others, because each of us has our own path, and no one can really keep us from moving forward. On the other hand, by helping each other, we are able to do better and improve faster.” 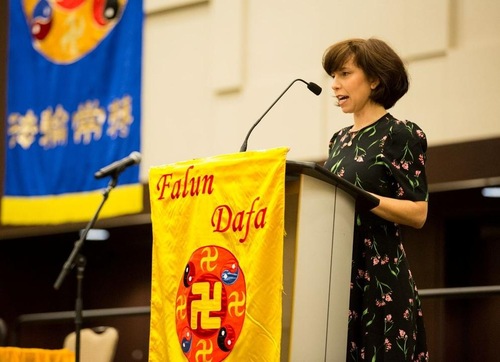 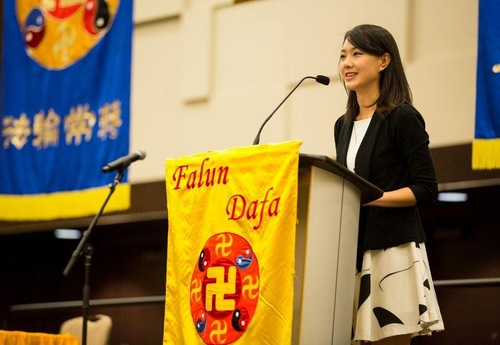 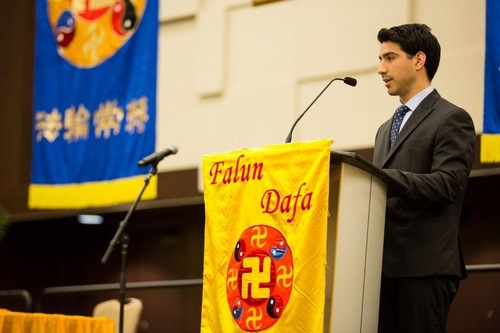 Eighteen practitioners spoke at the conference.

Ms. Wang from Toronto talked about how she made breakthroughs when promoting Shen Yun. During the introductory workshops, she often encountered Chinese agents. She knew she had to tell them the facts about Falun Dafa and debunk the Chinese Communist Party (CCP) propaganda.

“I still remember my first workshop. I was very nervous and was even hoping there wouldn't be any Chinese in the audience,” Ms. Wang recalled. In addition, she removed two slides covering the facts of Falun Dafa. On the day of the workshop, she saw a Chinese agent and began to have negative thoughts. Fortunately, her talk went well although she only spoke one sentence about the persecution of Falun Dafa in China.

When she spoke with the agent afterward, Ms. Wang found out he was actually Vietnamese. “I suddenly felt relieved and knew how silly I'd been. But the fear was real, and it was something I had to overcome,” she explained.

At home, she started to look within and began to wonder what exactly she feared. She thought to herself: Master came to save people with Dafa. Didn't those people come to the event to hear the truth about Dafa and find out about Shen Yun? The two slides she'd removed had information they needed to know, and she should have shared them openly. She realized she needed to validate the Fa, not herself.

From this experience, she learned where she needed to do better. By talking to other practitioners, Ms. Wang learned how to make smooth transitions to important topics so that the audience could not only learn about Falun Dafa but also enjoy her presentation.

Mr. Liu in Toronto is introverted and sometimes blushes when speaking to strangers. However, he knows that many Chinese people have been deceived by the communist regime’s hate propaganda and decided to call them and help them.

When he first joined the RTC platform many years ago, he just listened to others make phone calls to China. “When I first began and my call was picked up, I was very nervous, worried that the person who answered might have a bad attitude and hang up.” He later realized that it was due to his human notions and that feeling fearful itself meant he needed to work on it. He said making phone calls to China is a good opportunity to overcome fear and help save people directly. This is something that must be done, he reflected.

After Mr. Liu began to make regular calls, he gained experience, and his righteous thoughts got stronger. “Every day I could see progress. I also became more familiar with what to say and could speak more naturally, as if talking between friends.”

Ms. Zheng, who began to practice in 2014, told how she improved herself through making films. “When I first joined the project, someone asked me to write comedy skits. I did not like doing it because I had no idea how to do it. Plus, I was an actress, and I was supposed to act by following a script,” she said.

In time, she learned from those she worked with and discovered that many difficult tasks became easier as she worked with her team. “Compared to regular filmmaking crews, we have a very limited staff. Probably because of this, all of us are now good at multitasking and are able to handle everything,” she added. They discuss everything, from scene-setting to props and makeup and shifting equipment. Whatever needs to be done, someone does it without being asked.

“If one of us does not do well during filming, others will provide encouragement and help instead of finding fault. This allows all of us to do our best. I also found it easier to calm down and quickly fit into my role and do well,” Ms. Zheng said.

The conference concluded at 5 p.m. Several practitioners said they learned a lot from their peers and were inspired to become more diligent Falun Dafa disciples.