New practitioners shared their experiences during the late-April workshop. Many of these newcomers witnessed the amazing healing power of Falun Gong, as have millions of people who practice Falun Gong around the world. 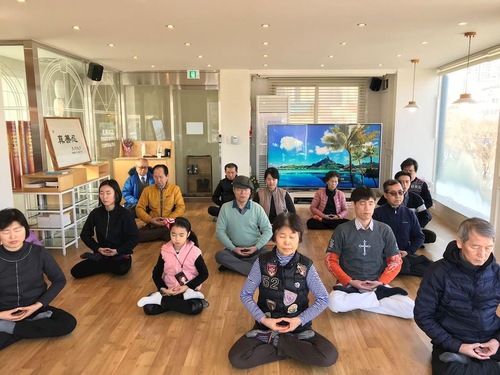 Yu Shangshun joined the workshop after seeing the words “Truthfulness-Compassion-Forbearance” on a Falun Gong booklet.

Yu said her fingers started to form pus on the first day of the workshop. When the pus was drained, she felt that her fingers had become very flexible.

“On another day, a piece of scab on my ear fell off. I then felt the rotation of Falun (law wheel),” she said, “I know that all of these things happened because my body was being purified.”

Yu was not the only one who felt the rotation of Falun. Kim Meijing, who has read the main book of Falun Gong, Zhuan Falun, felt during the workshop that her physical stress had disappeared, and amazingly, she felt Falun spinning in her stomach.

Quan Douhuan used to practice another school of qigong taught by a monk. But one day the monk asked him not to come anymore. So Quan came to the Falun Gong workshop.

During the workshop, Quan felt a force drilling into his forehead, which is described in Zhuan Falun. He then felt the rotation of Falun.

He said, “I now totally believe the existence of Falun. It exists in another dimension. It is so amazing.”

“At the beginning of the workshop, I waited for the end of the session every day. But later, my attitude changed. I really enjoyed that feeling,” he said.

Yuan Zhengxi said he often saw 20-some practitioners exercising in a park. But he never thought he would join them until a friend of his told him about dramatic changes in her health after practicing.

Yuan decided to give it a try. He said, “The biggest change is the improvement in my sleep. Usually, I only sleep soundly for two hours at most. But these days, the sleep time has doubled. I am even able to fall back to sleep after using the bathroom during the night.”

Kim Baosheng also experienced great changes in her body. She said, “I usually felt uncomfortable in the morning, and didn't want to get up. But these days, the uncomfortable feeling is gone. Getting up is no longer a difficult thing.”

“Moreover, every time I showered I lost a lot of hair. But now the hair loss is less. It seems that my digestive system also has been improved. It is amazing.”

Quan Bingshan has seen Falun Gong's group exercises before. One of his friends, who is a Chinese medicine doctor, strongly recommended the exercises to him, so he joined the workshop.

Quan had severe diarrhea when the workshop first began, but he didn't feel any sickness. He later realized that his body was being purified. The second day, he felt a strong energy flow going through his arms during the exercises.

He said, “I cannot help my tears. I thank Master Li Hongzhi (the founder of Falun Gong) for publicizing such a good practice for free.”