(Minghui.org) Today's news from China includes incidents of persecution that took place in 16 cities or counties in 12 provinces. According to this report, 7 Falun Gong practitioners were subjected to mistreatment during their detention, and at least 16 were illegally arrested. 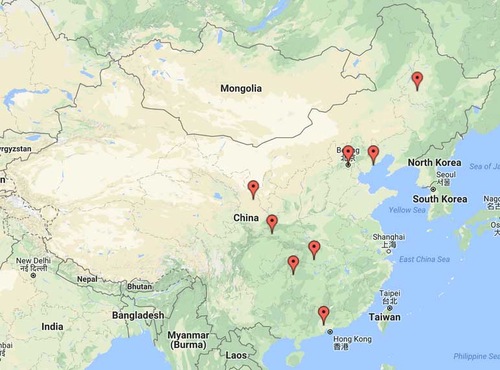 Ms. Zhang Juanhua was arrested by theTai Tourism Police. She has been released on bail.

Ms. Yuan Zhiqin, a practitioner from Anxingzhuang Village, Mulin Town, Shunyi Distric, was identified by the Beijing Network Management when she spread Falun Gong materials using a mobile phone. She was arrested at home on September 5, 2017. She was held at the Nihe Detention Center, and later subjected to criminal detention.

Ms. Yuan was detained for a month in May 2017 for publishing Falun Gong materials online using a mobile phone.

Mr. Lu Chaobo and his sister were arrested by officers from the West Station Police Station when they were waiting to pick up his son, who was coming home from college, on the evening of April 4, 2018. They were taken to the police office located upstairs, where they were searched. The officers took his car key and searched it. They were released two hours later.

Ms. Mei Shuqing, 41, was arrested when she was distributing Falun Gong materials in a community at Zhashan Street, Caidian District on April 6, 2018. Police ransacked her home and confiscated her two printers, two computers, a speaker, an MP3 player, a stapler, and a lecture by Falun Gong's founder. Her family was notified on the morning of April 7 that Ms. Mei was held at the Bolin Detention Center in Zhangwan Street, Caidian District.

Ms. Wang Shujuan was arrested by officers from the Houmatuo Police Station in Changli County on April 3, 2018. Ms. Wang was held at the Qinhuangdao No. 1 Detention Center. She was released on bail on April 5, 2018.

Ms. Zhao Yanfeng was arrested on September 15, 2016 for talking to people about Falun Gong. Judge Huo Biao of Lianhu District Court tried her in February 2017 without informing her lawyer or family. Her lawyer learned in August that she has been sentenced to two years in prison.

Ms. Zhao has filed an appeal to the intermediate court. She is awaiting the higher court's decision on her appeal.

Ms. Chen Heqiong was recently sentenced to one year and two months in prison for refusing to renounce Falun Gong. She is appealing her case.

This is not the first time that Ms. Chen has been targeted for her faith. She was sentenced to seven and a half years in prison in 2004.

Ms. Sun Liping was sentenced to prison for a third time, and her appeal has been rejected.

Ms. Sun was last arrested on August 16, 2016 for refusing to renounce Falun Gong. She filed an appeal after she was sentenced to five years in prison on November 3, 2017. The local Hangzhou City Intermediate Court ruled in February 2018 to uphold the original verdict, but it did not notify Ms. Sun's lawyer until late March.

The higher court reached its decision without holding a public hearing as requested or considering the lawyer's legal opinion regarding the lower court's violation of legal procedures.

Ms. Sun was previous jailed for five years in August 2002 and three and a half years in July 2008.

Ms. Yang Jinmei was sentenced to five years in prison on March 25, 2018 for talking to people about Falun Gong.

Ms. Yang was arrested on April 27, 2017 and tried on February 7, 2018. Her daughter was listed as her defender, but the young woman was arrested on the day of the court hearing and held until that evening.

Wei convicted Ms. Yang on March 25. She is now appealing her case.

Mr. Zhao Echuan is set to face trial for refusing to renounce Falun Gong. It is unclear exactly when his court date is scheduled.

Mr. Zhao, 49, was arrested on October 16, 2017 and has since remained at the Baihuashan Detention Center. His family did not find out about his arrest until more than one month later.

This is not the first time that Mr. Zhao has been targeted for his faith. He was sentenced to 15 years in prison following his arrest in November 2001. He was forced to divorce his wife during his imprisonment.

He had no home to return to when he was released in December 2014. He worked as a motorcycle taxi driver prior to his latest arrest.

Ms. Jiang Jianhua, 65, was arrested in October 2017 for talking to people about Falun Gong. She was held in the Shenyang No. 1 Detention Center. The Dadong District Procuratorate submitted her case to the Dadong District Court.

Her family has filed a lawsuit to Central Discipline Inspection Committee against those who participated in the persecution of Ms. Jiang.

Mr. He Yuanlang and Mr. Jian Xuefu were sentenced to five years and four and a half years in prison on December 15, 2017, respectively. Both of them filed appeals to the Xinyang Intermediate Court.

Two judges from the intermediate court went to the Guangshan Detention Center on the morning of March 9, 2018 and announced that their verdicts were upheld.

Mr. Cao Guozhen was sentenced to six years’ imprisonment by Judge Yan Ruhua from the Junan County Court on September 11, 2017, after his attorney defended him twice. He was transferred to the Shandong Provincial Prison on December 21.

The judge deliberately mailed the verdict to Mr. Cao’s attorney by regular mail, which caused his attorney to miss the appeal deadline.

Langfang Intermediate Court did not hold a trial but decided to uphold the verdicts against Ms. Yu Zhaoxia, Ms. Jing Lianzhen and Ms. Wang Jiahua on March 31, 2018. Ms. Yu was sentenced to eight years’ imprisonment; Ms. Jing, to three years; and Ms. Wang to ten months.

Ms. Yu and Ms. Jing have been transferred to the Shijiazhuang Women’s Court. Ms. Wang has been released home because she had been held for more than 10 months.