(Minghui.org) Today's news from China includes incidents of persecution that took place in 7 cities or counties in 5 provinces. According to this report, 7 Falun Gong practitioners were subjected to mistreatment during their detention, and at least 4 were illegally arrested. 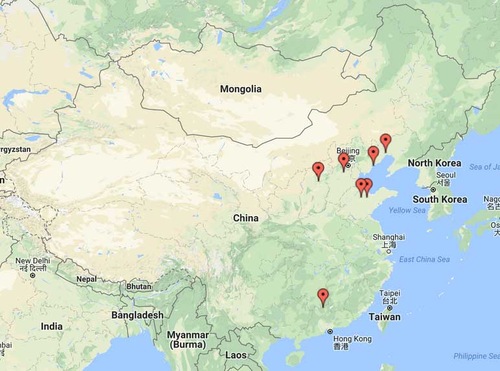 Five officers from the Taitou Town Police Station led by Wang Dengjia, village head, and Wang Yuqin, director of the woman's committee, went to the home of an 82 year-old practitioner with the last name Zhang in Nanyangtou Village on March 13, 2018. They ransacked the place and confiscated photos of the founder of Falun Gong, two copies of the book Zhuan Falun, and copies of Minghui Weekly.

Ms. Yang Genhua and her husband were on their way to Tianjin to attend her mother's funeral on February 22, 2018, when they were stopped and body searched by security officers from the Taiyuan Railway Police Station. The officers found the book Zhuan Falun, along with paper bills with information about Falun Gong written on them. The officers took the couple to the police station where they brutally tortured them in an attempt to extract information from them. The couple missed the train, and their tickets were nullified. They were taken back to the Xinzhou Police Station that evening. Nine people from the Changzhenglu Police Station ransacked their home and confiscated a computer, a printer, a music player, and 2,600 yuan in cash.

Ms. Zhao Lanying and Ms. Miao Surong from Maying Township were arrested by three officers from the Dongmaying Police Station on April 1, 2018. They were taken to the police station, where they were interrogated.

After returning to the police station, Ms. Zhao was cuffed to a chair, deprived of sleep, and locked in a small, dark room for half an hour. Both practitioners were released before daybreak the following morning.

Two people from the township government and three police officers went to Ms. Zhao's home just after 10:00 a.m. and harassed her.

Ms. Yu Zhen and Ms. Li Zhongxiu from Linzi District were arrested on the evening of March 24, 2018, by officers including Liu Ming from the Qidu Petrochemical Police Department.

The officers later arrested Ms. Li Zhongxiu's husband at work, and took him to his home to open the door. The officers confiscated a computer and some personal belongings. The officers then ransacked Ms. Yu's home.

Both practitioners were taken to the police department's detention center on March 25, and held there for ten days.

Ms. Yu was transferred to the Zhangdian Detention Center on the afternoon of April 3. Ms. Li was released on the morning of April 4.

Ms. Zhang Sulan from Xiaogaozhuang Village was transferred from the No. 2 Detention Center to the No. 1 Detention Center on March 23, 2018. She was being held under criminal detention. She has been placed under arrest with a warrant issued by the Procuratorate.

Officials from Lechang City Detention Center recently told Mr. Liang Jianjun's lawyer, after the lawyer repeatedly questioned them about his situation, that Mr. Liang had been transferred to Bietou Prison, in Conghua District, on March 21, 2018. The officials also told the lawyer that if Mr. Liang refused to be “transformed” within a month, his family would no longer receive any notifications about his situation.

Mr. Liang was arrested at work on May 25, 2017, by officers including Li Weizhong from the Domestic Security Division. His home was ransacked. His case was turned over to the Procuratorate on August 25, 2017. The Lechang Court tried Mr. Liang on November 7 and sentenced him to five years in prison.

“Tour Guide in Taipei, Taiwan: “You Only Need to Visit Places with Falun Gong Banners””