(Minghui.org) As of March 2018, over 300 million Chinese people had renounced their memberships in the Communist Party organizations. Practitioners in various cities around the world have held activities in recent weeks to raise awareness of the significance of quitting, and to expose how the Chinese Communist Party (CCP) has been persecuting innocent people during the past several decades. Below is a report from Houston, Texas.

Practitioners gathered in Houston’s Chinatown at noon on April 7, 2018 with banners reading “China is Different from the Communist Party,” “Quit the CCP for a Better Future,” etc. Many passing vehicles and pedestrians saw the signs, and some drivers honked to support. One man gave a thumbs-up and said, “Thank you for being here. Please keep doing this.” 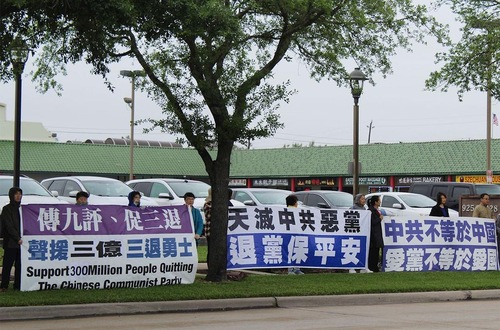 Falun Gong practitioners raised awareness in Houston’s Chinatown on April 7, 2018, about over 300 million Chinese who have quit the Communist Party organizations.

Niga, a local resident, was curious about the activity and asked a practitioner for details. The practitioner explained to her how Falun Gong practitioners in China are persecuted for their belief, and as a result, many Chinese are choosing to separate themselves from the regime after seeing this atrocity and other suppression during various political campaigns. Niga said she was aware of the communist history and said she was glad to hear that so many Chinese people have said no to communism.

One Chinese man, Mr. Li, said he had read some materials provided by practitioners, and had already renounced his Communist Party membership. He said he admired practitioners' courage to speak the truth and asked what he could do to help. The practitioner said he could tell more people about it, including friends and relatives. Mr. Li nodded.

Another man, who had seen practitioners near the Chinese consulate previously, said he thought practitioners were too political. One practitioner explained to him that practitioners have no political agenda and they simply want to practice their belief in Truthfulness-Compassion-Forbearance. It is the Communist Party that destroyed Chinese culture and now pushes people away from traditional values. The man agreed with the practitioner and said he would like to sever ties with the Party.

One older man in his seventies said he was familiar with the events of the past few decades. “I spent most of my life in mainland China and I know exactly how bad the regime is.” He also knew that Jiang Zemin, the former Chinese leader, had started the persecution and made the country more corrupt than ever.

Ms. Zhang, a practitioner who attended the event, said more than 300 million people quit the Communist Party because the regime had committed countless bad deeds. She said she often tells others about this and suggests that they quit the communist organizations so that they will not sink with the Party.

Ms. Zhang added, “One of my friends not only quit the Chinese communist organizations, but also wants to join Falun Gong practitioners. She said practitioners are outstanding in safeguarding righteous belief during the harsh persecution.”