(Minghui.org) Many years ago, after a chaotic summer, Marita was finally able to sit down in her garden and enjoy the beautiful view of the small village at the bottom of the hill.

Her husband had remodeled the garden and made a big mess.

“The old me would have fought with him,” Marita recalled, “He always said that I was stubborn and always got my way.”

“But Falun Dafa has changed me. I saw my attachments to the garden and the view. So I didn't argue with him that time. I even praised his work.”

“My husband is easygoing and a little messy, which used to upset me a lot. I often got mad,” Marita said, “but practicing Falun Gong made me relax. I am able to let the attachments go. When I put down the attachments, everything became simpler and easier.”

“My husband is happier now. I've learned to listen, and our conversation has become more constructive.”

“The old me wanted everything, the trivial objects, to be put at exactly the same place everyday. Now, I've changed,” Marita smiled. 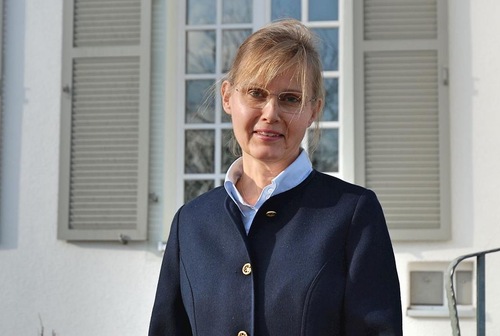 Since she was very little, Marita had been afraid of people. She had a strong sense of insecurity. When she was 11, she found that many behaviors were negative and destructive.

In college, she studied art history and ethnology, and later settled on medicine, because she was interested in the balance between the human body and nature.

Now, she is a doctor in Frankfurt, Germany.

She didn't want to hang out with other people, because she found their behavior to be irrational and harmful.

“People fight. My wish is to keep the balance of nature, but people destroy it. Hanging out with people exhausted me.”

“As a doctor, I am able to work with the patients and find the balances in their physical body and spirit.”

Marita often works more than 10 hours a day. Counting the commute time, she spends more than 12 hours away from home.

Her biggest hobby was reading books that focused on positive things and could help her to find inner balance.

Marita often thought about the meaning of life.

“Sometimes I thought the so-called happy times could be deleted from my life, because they didn't bring anything useful. What really gave me deep meaning were those valleys. The suffering made me think and pursue spirituality,” Marita said.

“A book that I can read again and again forever”

“Reading more and more books, I realized that what I needed was a really genuine cultivation practice. I didn't pursue comfort at the surface level, which didn't help me when I ran into tribulations. I kept looking for such a practice.”

In February 1999, Marita saw a book in a local bookstore, Falun Dafa—a pathway to one's true self. She was looking for a gift for her friend but found that this book fit her better.

After seeing the words “free teaching” in the book, she was touched: “This must be a righteous and pure practice. I had tears in my eyes. Such purity does exist!”

From this book, she learned that the main book of Falun Gong was Zhuan Falun, so she found a copy of it.

“I never read books a second time. Sometimes I wanted to read a certain book again, but never found time,” she said, “but the first time I finished Zhuan Falun, I was so surprised—I finished it so fast? I told myself that I needed to read it again, now. So I did, and since then I've never stopped reading this book.”

After the third time reading Zhuan Falun, Marita understood that Falun Gong is what she had been looking for. She found the practicing site in Frankfurt and joined the exercises with local practitioners.

Marita's menstrual cycle had been very irregular since she was young. She had to take medicine to treat the condition, even after she had a daughter. Due to irregular hormones, she had pimples on her face.

Three months after she started practicing Falun Gong, she had a menstruation, and two weeks later, she had one again. She felt strange. But since then, her cycle has become regular with no exception. No matter how busy or stressed she is, the cycle is always regular.

“It seems that my body has a new mechanism,” she said, “it cannot be explained by modern medicine. My body has a new working mode, which is very precise. The pimples on my face disappeared too. I used to be a little embarrassed to see patients who came to me for skin problems, but now my face is smooth.”

“My co-workers saw the change on my face and asked me to tell them my secret. For many years, I didn't want to talk about myself. But now, I don't feel strange among people. My stress is gone, too.”

Her husband used to make fun of her, because she was often afraid of many things and felt nervous. He was surprised to see the changes in her.

“We had strict plans for everything in daily life, from decorations to travel. I could not relax until every little detail was taken care of.”

“But now, I am able to let go of many things. I give my husband space, and put down my attachment to controlling everything.”

“The garden is a good example. He is proud of what he has been doing. From my viewpoint, his work made the garden messy, and I lost some plants that I liked. But what I gained was a happy and proud husband. Shouldn't I be happy for his achievement?”

“Also, I found that I had many attachments to the garden; this flower should be here, that plant should be like that, etc. Everything was important to me. They are mine. Such attachments made me nervous every day.”

“But I told myself: I am a Falun Gong cultivator now, so I should put down these attachments.”