(Minghui.org) Today's news from China includes incidents of persecution that took place in 19 cities or counties in 12 provinces. According to this report, 3 Falun Gong practitioners were subjected to mistreatment during their detention, and at least 31 were illegally arrested. 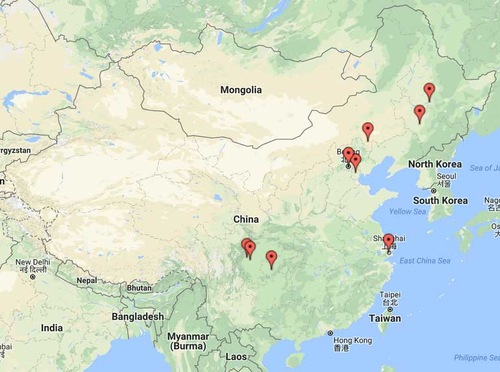 Ms. Chen Zhongzhi, 68, from Zhongbei Town in the Xiqing District was arrested by plainclothes officers near the Jieyuandao area on the morning of March 13, 2018.

Her whereabouts are unknown.

Ms. Shao Xiuyan was arrested at Daishan Park in the Luyuan District on the morning of March 7, 2018. The police ransacked her home and confiscated photos of and books written by the founder of Falun Gong. They also took her cell phone.

Ms. Shao is being held in the Changchun City No. 4 Detention Center.

Mr. Xu Changqing, 70, was arrested by officers from the Jinshan District Domestic Security Division and the Zhujing Police Station on February 26, 2018. He is being held in the Jinshan Detention Center.

Ms. Gao Zongying, a retired teacher from Chongqing University, was arrested at the Qianjiang Railway Station by railway police officers on March 12, 2018. Her home was ransacked by Shapingba District police the following day.

Ms. Gao was taken to the Geleshan Brainwashing Center.

Mr. Zhang Xiuqi, about 40 years old, was recently arrested and his home ransacked.

Ms. Xu Guifen was arrested in mid-October 2017. She was taken to the Yaojia Detention Center.

Ms. Zu Lihong, from Guoyuan Village, Hongqi Town in the Nangang District, and Ms. Yang Yujing were arrested at Ms. Yang's home in Pingfang Town by officers from the Pingfang Police Station on the morning of March 10, 2018.

Ms. Yu Shengbi was arrested by officers from the Sansheng Township Police Station on March 9, 2018, for talking people about Falun Gong. Officers ransacked her home that evening and extorted 1,000 yuan from her family.

Ms. Yu was held in the Anjing Detention Center in Pi County for 14 days.

Mr. Wang Hongbin from the Changping District was arrested by officers from the Shahe Police Station on the morning of March 13, 2018. The officers ransacked his home and confiscated Falun Dafa books and materials.

Mr. Wang was taken to the Changping Detention Center.

Ms. Fan Wenxiu, 51, was arrested on September 1, 2017, for refusing to renounce her belief in Falun Gong. She was sentenced to three and a half years in prison on February 9, 2018, and was to be taken to the Changsha Women's Prison on March 13.

Ms. Fan began practicing Falun Gong in 2014 after undergoing surgery to remove a stomach tumor. Her health soon improved after she started practicing, and she used every opportunity to tell people about the benefits of Falun Gong.

Unable to do the Falun Gong exercises in the local detention center, Ms. Fan began experiencing stomach pain again. Her brother and sisters requested that she be released on medical parole, but the local police refused their request and proceeded to have her prosecuted.

Mr. Cai Chunpeng, 38, was arrested on January 3, 2018, for refusing to renounce his belief in Falun Gong. He was issued with a formal arrest warrant on January 30.

Mr. Cai went on hunger strike shortly after his arrest. He was confined to his bed in the Chenghai Detention Center, with his hands cuffed and feet shackled. Nurses from the local Huaqiao Hospital force-feed him every three days.

His family's request to have him released on medical parole was denied.

Five practitioners in Wuhan City were arrested on July 12, 2016, and were tried in the Huarong District Court, Ezhou City, on November 21 and 22, 2017. Prison sentences were handed down around March 2018.

They have all appealed.

Four practitioners were arrested in December 2016. They were sentenced to prison on March 13, 2018, after three court hearings.

Mr. Wu Zixiang was arrested on September 19, 2017, for refusing to renounce his belief in Falun Gong. He was sentenced to three and a half years in prison in January 2018.

Mr. Wu was taken to the Zhengzhou Prison.

Both women filed an appeal, but the Dandong Intermediate Court uphold the original verdicts on February 26, 2018.

Ms. Li Guiqin, 69, was arrested on March 9, 2017. It is unclear when she was tried, but her family learned on July 20 that she had been sentenced to three years in prison. Her appeal was also turned down by the Dandong Intermediate Court.

Ms. Sun and Ms. Li were taken to the Liaoning Province Women's Prison on March 12, 2018. The prison authorities refused to accept Ms. Zhao due to her high blood pressure. She remains in the Dandong Detention Center, which is applying to have her released on medical parole.

Mr. Zhang Yongbao, 36, was arrested on July 4, 2017, after being reported to the authorities for hanging banners bearing Falun Gong messages. Mr. Gao Jun, 60, was arrested the following day after being found to have had contact with Mr. Zhang.

The Liaoyang County Police Department was responsible for both practitioners' arrests. The police ransacked their homes and confiscated a large amount of Falun Gong books and informational materials.

Both practitioners are from Anshan City and have appealed their sentences.

Judge Zou Guojiang from the Liaoyang City Intermediate Court was assigned to handle the two practitioners' cases. His phone number is +86-419-2952108.

Ms. Cao Yanchun was tried at the Laishan District Court on the morning of March 12, 2018. The trial lasted 90 minutes. Four of Ms. Cao’s family members and relatives were in attendance.

Ms. Cao’s lawyer defended her with a “not guilty” plea. Ms. Cao also defended herself in the court.

Mr. Li Kuan, in his 60s, received a call from Judge Jin Hua on March 7, telling him to go to the court. He was arrested when he got there. His whereabouts is unknown.

Their 39 year old daughter, who is mentally disabled, is left at home to look after herself. The local neighborhood committee is monitoring her.

Ms. Ren Fengmei was arrested at her home on the morning of October 18, 2017. Her arrest was approved on November 24.

Ms. Zhang Wenhua planned to go to her daughter’s home in Shijiazhuang City, Hebei Province, to help her take care of her child. She was arrested at the Qinhuangdao Train Station on March 11, 2018. Her I.D. card was confiscated and she was taken to the Baitaling Police Station.

Ms. Tan Xiuxia from the Ningxia Hui Autonomous Region and Ms. Xu Runye from Inner Mongolia were taken to the Ningxia Women’s Prison.

The indictment letter was dated mid-October 2017. However, Ms. Tan’s family did not receive it until mid-December 2017.

“Podcast (Cultivation): “A Lost Soul Rediscovers the Truth of Life””