(Minghui.org) Falun Gong practitioners gathered in Philadelphia's Chinatown on March 24, 2018, on a sunny day after a recent snowstorm but with the promise of early spring to celebrate over 300 million Chinese people who have renounced the communist party organizations, a milestone towards China's spiritual freedom and a brighter future. 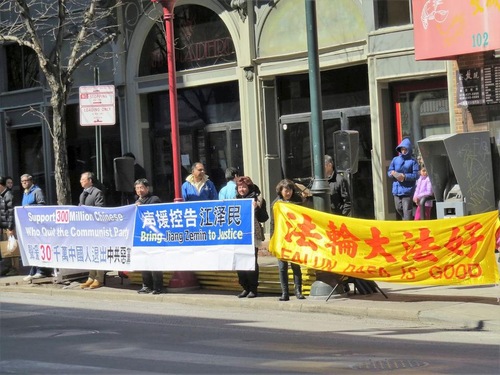 Breaking Away from the Communist's Influence

After the Nine Commentaries of the Communist Party was published in 2004, a large number of people have awakened and chosen to separate themselves from the Chinese Communist Party (CCP) organizations, explained Ms. Zhao, representative of the Quitting the CCP (Tuidang) movement in Philadelphia. “When joining these organizations, regardless of whether it is the communist party or its affiliates the Youth League or Young Pioneers, people vowed to devote their lives to the Party,” she said. “Renouncing these memberships will allow people to reposition themselves and be blessed when the communist regime is weeded out.” 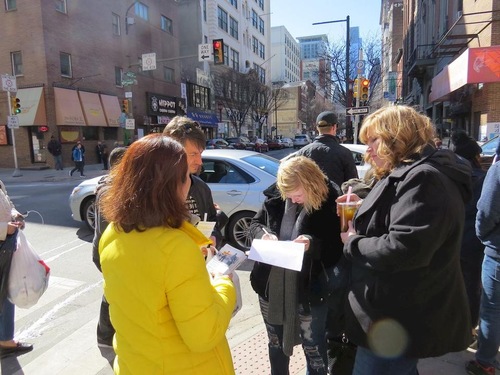 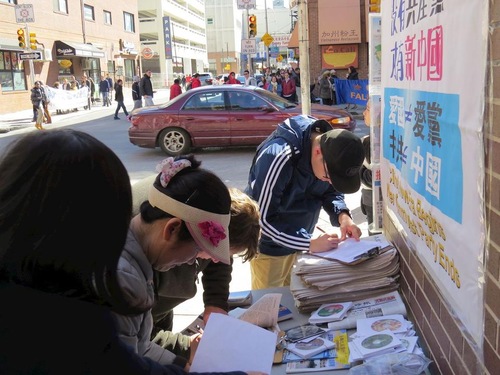 Local residents and tourists from around the world signed petitions calling for an end to the persecution in China.

The movement has gained momentum in the last decade. From 2004 to 2011, the number reached 100 million; four years later, it reached 200 million; then by 2018, it reached 300 million. “The acceleration continues and about 100,000 Chinese renounce their memberships every day,” Ms. Zhao continued. “Quitting the CCP is not a political movement. Rather, it is a process for the Chinese people to break away from communist's influence and find their own spiritual path.”

Support from Residents and Tourists 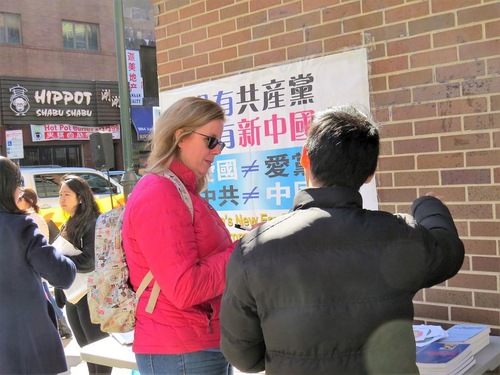 Rachel, a visitor from Alaska, said Falun Gong is peaceful and anyone should be allowed to practice it.

Rachel from Alaska talked with a practitioner and learned about Falun Gong, as well as the ongoing persecution in China. Surprised by the mistreatment practitioners were subjected to for their belief, she said, “This meditation is so peaceful. There should be no problem practicing it anywhere.”  She signed a petition calling for an end to organ harvesting from living Falun Gong practitioners in China and took information to read later. 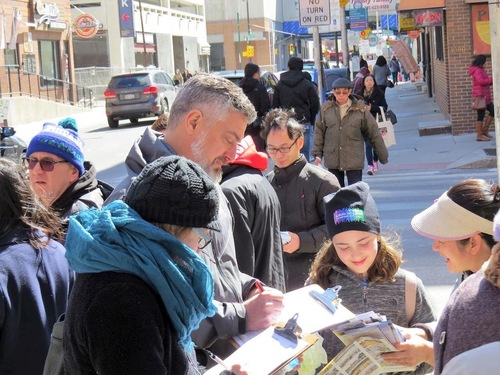 As Philadelphia resident Mark passed Chinatown with his wife and daughter, they saw the practitioners' event and wanted to find out what was happening. Having heard about the suppression in China previously, the couple both signed petitions to support practitioners. Their daughter read a pamphlet and said she liked the principles of Truthfulness-Compassion-Forbearance. 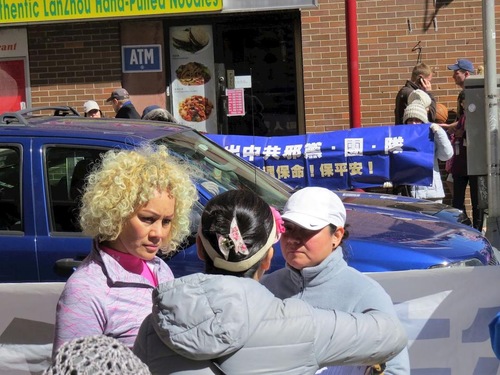 Liesbeth (left) and her friend listened attentively as a practitioner told her about the improvements one experiences from practicing Falun Gong. 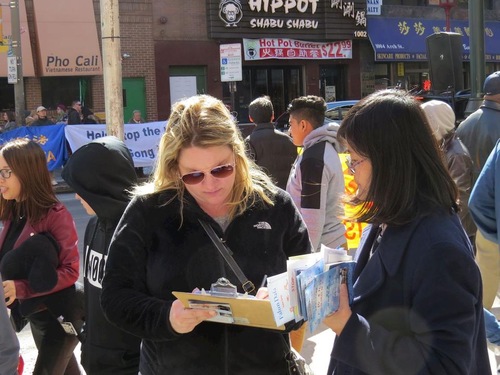 Amy signed a petition to end the persecution and wished the practitioners well.

Liesbeth and her friend were very interested in the health benefits of Falun Gong. They were also happy to hear that all the events and exercise activities were free of charge. Another passerby Amy heard about Falun Gong for the first time. Shocked by the forced organ harvesting in China, she signed a petition, calling for the tragedy to end soon. She thanked the practitioners for sharing the information with her and sincerely wished them well.

After talking with practitioners during the event, more than 10 Chinese agreed to quit the communist party organizations. One of them was curious about the physical and spiritual benefits practitioners had experienced, and said that she would like to give it a try.

Mr. Wang, one of the hosts of the activity, said that China is experiencing a significant transition after going through 5,000 years of history. He said reviving China is the Chinese people's responsibility and mission.

“History has told us that communism is not an option for us, but a dead end,” he concluded, “Quitting the CCP will benefit us as individuals and China in general.”